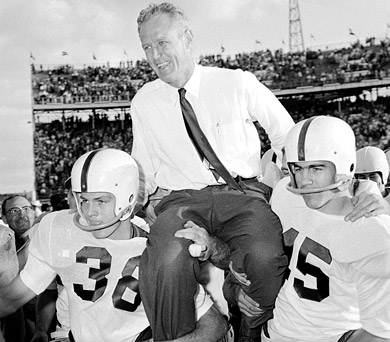 I found this great piece several years ago.  For those who don’t know Bud Wilkinson:

“Bud Wilkinson of Oklahoma became the epitome of the buttoned-down coach in the buttoned-down decade. He became The Man with the Gray Flannel Whistle, and his teams played with the same cold efficiency that radiated from his sideline. No team in the modern era has won won like Wilkinson’s Sooners: He had a 31-game winning streak from his second season, 1948, to the 1951 Orange Bowl, a 47-game winning streak from 1953 to 1957 and a record for the decade of 93-10-2 (.895). The Sooners won three national championships (1950, 1955 and 1956). More importantly, with the 47-game streak they set a standard that has grown into college football’s equivalent of Joe DiMaggio’s 56-game hitting streak. The Clipper’s streak is 67 years strong. The Sooners’ streak turned 50 last year. No team has come within 12 games.” (SOURCE: ESPN.COM) COMMON COACHING ERRORS AND HOW TO AVIOD THEM

The best coach is the one who makes the fewest mistakes; the one who does the best teaching job; the one who is the best organizer. Writing the X’s & O’s is not the most important thing. There are 22 variables in a football game. Coach must be a salesman to the extent that when his team loses, they don’t blame him or the offensive and/or defensive system, but rather themselves.

FIRST = FAILURE TO USE TIME EFFICIENTLY.

Failure to recognize the time factor available to get the job done. Planning makes for valuable use of time. Too long on any one thing produces boredom. When boredom comes in, learning goes out. Football players have a short attention span. Hold to time schedule.

SECOND = FAILURE TO EXPLAIN THE PURPOSE OF THE DRILL.

Tell the boy WHY he is doing what he is trying to accomplish and he will do a better job. Explain WHY, then show HOW.

You can’t teach a boy how to block until he has learned stance. If he hasn’t learned stance, he doesn’t know how to step out of the stance into the block. FOURTH = TOO MUCH VERBAL INSTRUCTION ON THE FIELD.

How much can boy learn from your verbal instruction with his helmet on, he’s breathing hard, he aches, he’s stunned, etc. Do WHO and WHY in chalk talk. Teach assignments before hitting the field. Correct on the field. Teach – no! (HOW is taught on the field – not WHO & WHY).

FIFTH = TOO MUCH DEMONSTRATION BY COACH.

How much you know is not important. How much player knows is.

SIXTH = BEING ON THE FIELD TOO LONG.

Better to have a team eager to play rather than physically tired. How long to practice is a judgment factor. Cut down as season goes along – not going to change mechanical ability late in season. Only one rule never violated at Oklahoma. If one coach on staff feels practice too long, we must cut it down. More boys play poorly because they practiced too long than boys playing poorly because they didn’t practice long enough.