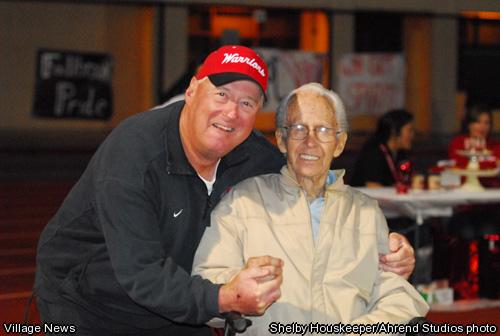 I’ve only coached high school football for twelve years.  I’ve been a Head Coach for eight of those.  But I can tell you right now, I learned early on the value of mental toughness!!  I had a really phenomenal coach when I was a freshman in high school.  His name was Coach Madden.  He has been coaching at Fallbrook High School for 22 years, started with our freshman class in 1990.  Coach Madden is one of those “manly men.”  I always thought he was related to “THE” Coach Madden, from the Raiders, because they kind of looked alike; both large, imposing men!  He has a big barrel chest, stands about 6’2″, and has such big hands you can fit a quarter through his wedding ring!  Usually has a big chaw in one side of his mouth.  He’s one of those intimidating coaches, until you really get to know the man.  Then you find out he cares more about his players than just about any coach I’ve had.  I called him a few years ago after his wife died.  He didn’t want me to hear him cry, so he changed subjects, and asked what he always asks me, every time I see him now days “How’s your mama doing?”

My very first game ever as a football player was out at Temecula High School.   I played at Fallbrook High.  It was at their place, and if you don’t know the area, it’s in a pretty dry valley and gets very hot in September. I will never forget how hot it was out there at 3:00 pm on a Thursday when we played.

Coach Madden used to use this drill after stretches when we were already on our backs.  It was the last thing we did while stretching.  We would have to just hold our legs up in the air, about a foot off the ground, and together.  We would dig our hands in to that grass and just hold on for dear life as he would sing a song.  “Put ’em up” he would say in that dry, hoarse, coaching voice.  “Oh Lord, won’t you buy me a Mercedes Benz” he would go on and sing.  It’s an old Janis Joplin song.  “My friends all drive Porsches, I must make amends. Worked hard all my lifetime, no help from my friends.  Oh Lord, won’t you buy me a Mercedes Benz?”  Then he would say the word we couldn’t wait to hear “DOWN.”  This mean we could put our legs down!!  What a relief.

He would go on and on through all of the stanzas of the song.  It was grueling!  Our hamstrings would be so tight, our backs would tighten up a bit.  It was worse during two a days, in the morning.  It was always a lot harder to hold on to the grass because it would be wet, so that meant it was harder to keep the legs up.  Here’s the kicker, if one kid put their legs down, he would say “Alright, put him down, gotta start over.”  That would usually start a chorus of groans and yelling at one another.  Sometimes he would have a captain stand up and watch everyone.  There were about 65 kids on our team, so inevitably we would have a hard time with having every kid keep his legs up for all of the stanzas of the song.  Many times, we would do that drill for 10-12 minutes.  That’s a long time!

A few years later, I was fortunate enough to coach with Coach Madden.  It’s how I started my coaching career, coaching the freshman team there at Fallbrook High.  Now I could ask him what was up with this drill that seemed to have very little to do with physical conditioning.  I was too immature as a freshman to really understand why we were really doing it.  Sure enough, my first practice as a coach, I asked Coach Madden why we did this drill.

He laughed.  That smart aleck laugh.  With that big piece of chew tucked in his cheek, he looked at me and said “You liked that one didn’t you?”  He said this with the grin of a Chesire cat who just swallowed a yellow bird!  Then he said “Mental Toughness.”  I looked at him puzzled.  Remember, I was an 18 year old coach new to this side of the team.  “We did it for mental toughness,” he went on to say.  “It doesn’t have much to do with conditioning the body, it’s all about conditioning the mind.  How long can you tell your body to keep going when your mind wants to quit?”

It was beginning to make sense.  “Chris listen, some of the best athletes out on this team, some of the most talented kids, watch them when we do it.  Some of those kids are the first to go down.  They aren’t used to having to fight for something!  It’s all up here,” he told me while pointing to his head.

A light bulb went on in my head.  The first lesson about mental toughness, check!  It all made sense.  The drill made sense.  I instantly remembered back to the times when I would be laying on that warm grass holding my legs up, grasping for grass.  And remembering that, yes, my brain would quit before my body.  And sometimes when my body would want to quit, my brain wouldn’t let it. What a magnificent drill I thought!  What a brilliant coach!

Remember that game versus Temecula I talked about earlier. We won that game by a very close score, in a hard fought game.  It was one of those games where the first team to quit would lose.  It was either 7-6 or 7-0. I can’t remember.  I just remember we won our first game as a frosh football team.  When we all got together in the endzone, and each coach got to talk to the team, Coach Madden started his talk out with “Oh Lord, won’t you buy me a Mercedes Benz?!!”  And we all started yelling and cheering!   Then he said “Was it worth it?”  We all yelled yes!  We sang songs all the way back to school on that old yellow bus.  I’ll never forget that trip.  We thought we were the greatest team on the planet!

That was my indoctrination in to mental toughness, and it’s importance in the game of football.  Taught to me by a great man, a veteran coach with a passion to help develop kids.  I’ll never forget the lessons of Coach Madden!