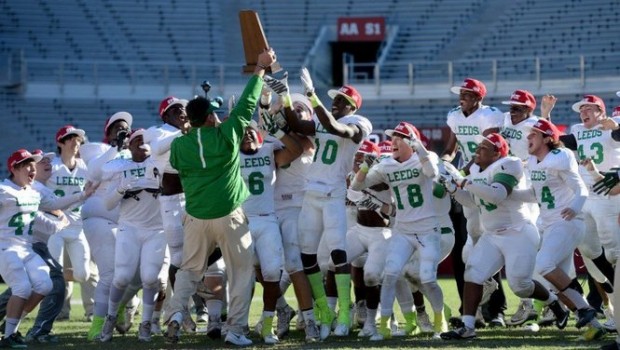 Head Coach Keith Etheredge led the Green Wave to a 13-2 record en route to winning the 4A State Championship in 2015.  They finished the season ranked #9 in the entire state according to Maxpreps.  They have been one of the most dominant teams in Alabama since Etheredge took over 8 years ago.

Since 2007 when Coach Etheredge took over at Leeds, they have an astounding 100-17 record!

I do not know what all the other programs do, but we take a Blue Collar approach. We want to out work everybody we play!

2. What do you consider to be the most important aspect of your state championship?

Our kids have done a great job of putting the TEAM First! Our kids sacrifice their personal goals to  accomplish Team Goals! 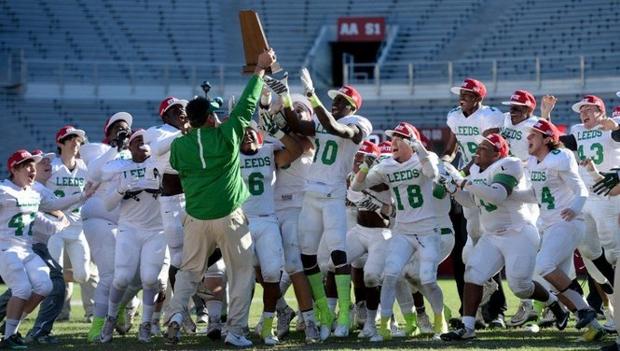 Be patient and outwork everybody else. Do not have your Coaches at work if there is nothing to work on, and always have them working when they are at work. One of the most frustrating thing about coaching is there are tons of other things that have to happen before you actually get the opportunity to Coach. Understand that those things have to be addressed before the job of coaching begins. Relationships and Communication are keys to success!

We base out of the Pro-I

We base out of the 3-3 Stack, but we are Multiple and try to take away what teams are most comfortable doing.

We have had an All-State kicker and Deep Snapper, and that has truly made a big difference. We also have kids that take pride in going down on coverage and blowing it up!

We have a character award we give at the end of the season to the players that exemplify what a great young man should be.

We award Team Captains on Offense and Defense!

Definitely my High School Coach Bobby Fairly, and all of the other coaches I had through the years (Andrew Brisky, Billy Copeland, Wayne Sheets, Ralph Sheets and many more). I also have been blessed to coach with some amazing Coaches/Men. Men like Brent Reese, Dale Burnett, Ryan Shell, Tony Johnson, Ashley Carlilse, Matt Hicks, David Hannah, Donnie Rogers, and TJ Slaughter (just to name a few). I have also been able to coach with some of my former players like Zac Elkins, Jesse Turner, Rush Perkins.