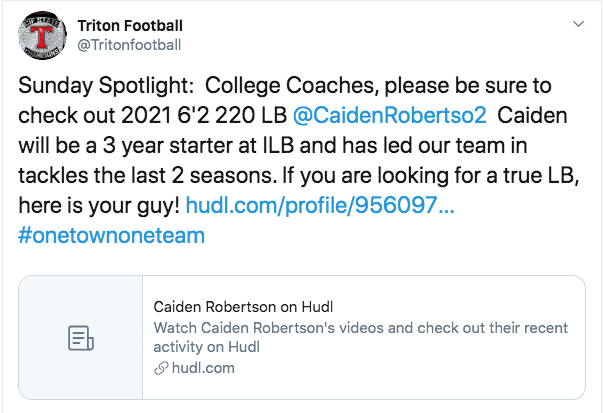 Social Media is a DYNAMITE tool to help market your athletic programs!  If used correctly, you can leverage the power of an unlimited audience to help grow your program’s image in your community, in your state, and maybe even nationwide.

I’ll never forget announcing to our student body in the Spring of 2011 that I had created a Twitter account for our athletic department.  “The first 5 people to follow us right now get a free hat at our CIF baseball game on Thursday” I announced.  The kids laughed at me!  “Twitter is for old fogies” one kid yelled out.  Interesting to think of 9 years later right?!  Not many athletic programs had a program account back then.  But it was fun for us to launch.  That’s the same time I got on Twitter myself.  Follow me!  (Here is how I grew my personal account to more than 12,000 followers.)

It really hit me in 2012 when I met a collegiate coach on Twitter, and he recruited one of my players to his school.  In fact, he was the FIRST player in a dozen years to earn even a scholarship from the football program I was working at, it was my first year there.  And the reason this kid was introduced to the school who ended up really liking him was because I was promoting his film on my Twitter account!  How rad is that?  And guess how long it took me?  30 seconds!  We have a unique ability today to promote our players to the next level like NEVER before.  Take advantage of that if you are not already!

Nowadays, programs are using Snapchat, Tik Tok, Instagram, Facebook and more to name a few.  And it is important for your program to use a few different outlets.  Kids aren’t on Facebook much anymore, and parents aren’t on Snapchat, for the most part.  So, if you want to get your message out there, if you want to get your program “out there,” you better use more than one avenue.

You need to create a strategy to use Social Media within your program.  It has become WAY more than just having a coach run an account if you want to do it the most effective way.  Colleges are now hiring Social Media Coordinators just for certain athletic programs, not the whole athletic department, but the football program itself!  How great of a job would that be?  But it all starts with a philosophy and a strategy and a plan.  Have a plan!

For instance, I’ve listed a dozen ways below that you can leverage Social Media for your program.  But if you aren’t organized, if you don’t create a systematic way to promote your program, you might end up all over the place without a real target.  Sit down and map out what you want to promote.  Which of these ideas below will you commit to for your program, and how are you going to make that happen?  Perhaps you put one of your coordinators (if you’re a football coach) in charge of idea #4 – Highlighting New Equipment.  Maybe your Offensive Line Coach is responsible for idea #8 – Highlighting Alumni.  He only focuses on that aspect of your Social Media presence.  This is what I mean by having a plan and a strategy to make the most out of your Social Media Presence.

Here are 12 ideas for using Social Media to promote your program.

1.  Highlight players efforts on the field during the season 2.  Highlight players efforts off the field year round I enjoy following this Southern California Principal, Dr. Lawe, of the Eastvale STEM Academy because she is always highlighting positive things about kids on her page. This is the same thing coaches can do!  Retweet what your school is promoting. 3.  Use stats to highlight the program and players, specific units 4.  Promote new equipment that the program has received