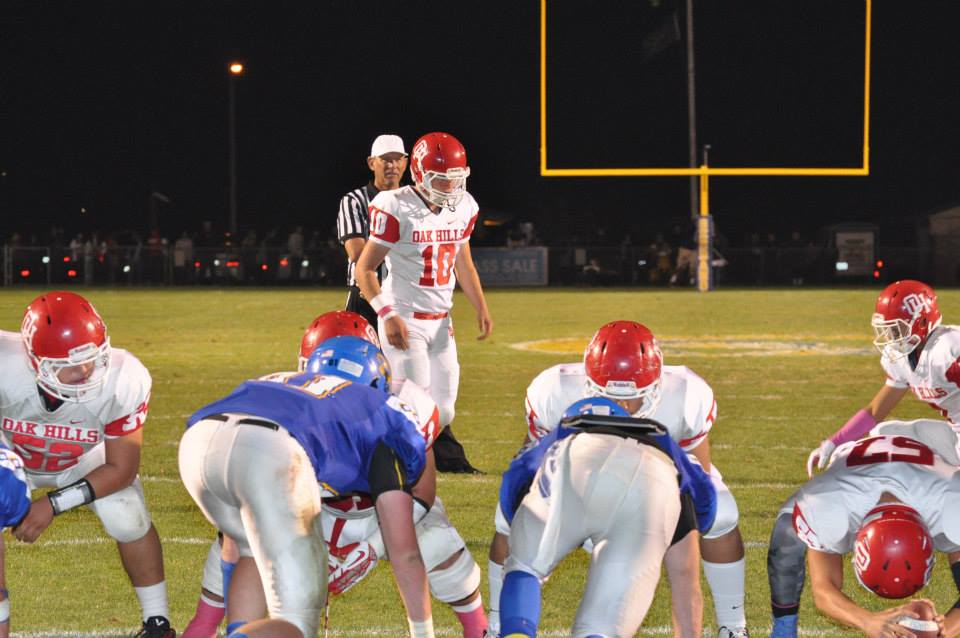 The first game we played this year (2014) caught me in a quandary that I have not faced in the previous thirteen years of coaching this great game we call football!  I am the Special Teams Coordinator at Oak Hills High School (Hesperia, CA.).  Our defense had just forced a safety, so the opponent was going to kickoff to us from their own twenty yard line; this is protocol after a safety. The team has the choice of a free kick: meaning they can place kick from a tee like a regular kickoff, or punt it.  Most teams opt to “free kick” just like a normal kickoff.  I had never imagined what happened next:  they punted the ball just about straight in to the air, going just 10.5 yards, landing on our side of the free kick line, then bouncing back to the kicking team.

I bet if they tried that another 9 times, it would never happen that way again!  However, it did this time, and we lost the ball.  I failed to prepare my team for that scenario.  In fact, as soon as I saw that the kicker was punting the ball, I figured that there was no such thing as an onside kick.  Have you ever seen that?  So, as soon as they kick this ball straight up in to the air, most of our coaching staff, and veteran players started yelling “poison!”  (Our word for the punt return team to get away from the football.)  Unfortunately, because we didn’t fair catch it on the 30.5 yard line, our opponent secured possession on about the 25 yard line after the bounce back to them.

Rule 6-1-5 states that “Any K (kicking team) player may recover a free kick if it has both touched the ground and goes beyond the plane of R’s (receiving team) free kick line (which is 10 yards from the kickoff line).  The two requirements may occur in any order.” Let’s take a look at some of the National Federation of High Schools rules as they pertain specifically to Special Teams, a part of the game that is near and dear to my heart.

FREE KICK AFTER A FAIR CATCH

One of the rarest of all Special Teams plays is the free kick after a fair catch.

This free kick can be a field goal try if they wish.  Now listen to this: if they choose to put the ball in to play by an offensive snap, and then there is a pass interference call on that play, they may still choose to snap or free kick after the penalty enforcement!  I bet you’ve never seen that before!  This is possible because it states at the end of 6-5-4 that

These choices remain if a dead-ball foul occurs prior to the down, or a foul of an inadvertent whistle occurs during the down and the down is replayed.

Imagine fair catching the ball after a free kick on your own 50.  Too far for a field goal. You put the ball in play by an offensive play which ends up being a 15 yard pass interference on the defense.  Now, the ball is moved up to the 35 yard line, and you can choose to attempt a field goal!  That’s just about as wild of a rule that you will see applied to Special Teams. A PUNTED BALL IS TOUCHED BY THE PUNTING TEAM FIRST; IS THE RETURN TEAM ALLOWED TO PICK IT UP AND RUN WITH IT?

In my opinion, this scenario is the rarest scenario that you see in this great game!  The K team “first touches” the ball, then the receiving team picks it up and runs with it.  I can’t remember the last time I saw this one personally, but it IS allowed!

So, the scenario might be that the punted ball lands on the ground, takes a hard bounce off of a kicking team coverage man, and then your punt returner picks it up before it has come to a rest.  That returner can run the football back.  It is NOT dead upon first touching. The ball is still live.  Since it says that the receiving team can “put the ball in play as determined by the action which follows first touching,” this means you can choose to take the results of the return your returner got OR take the ball at the spot of first touching.

Notice that the choice is cancelled if there is a penalty on the return.  This is a GREAT rule to know and to teach your kids because there is NO harm, NO risk for you to pick up the ball and run!   If your returner fumbles the ball on his run back, you can STILL maintain possession by choosing to take the “first touching.”

To further clarify this rule, the officials’ “Case Book” states:

6.2.5 Situation A: K1 attempts to down a punt beyond the neutral zone, but his touching only slows it down.  The bouncing ball is subsequently recovered by R1, who advances 25 yards but then fumbles and K2 recovers.  RULING: R may either take the results of the play or retain possession by taking the ball at the spot of K1’s first touching.

In 2004 I had a kid named Brad who was a hard running, aggressive kid.  We knew that our opponent onside kicked a lot.  He asked if he could pick it up and run. He was on the front line, on the 50. The rule I had for those kids, is the same rule I have today: if you get a one or two bouncer, field it cleanly right at your chest or stomach level, and can run then go for it!   That’s exactly what Brad did.  It was a one bouncer right to him at about the 48 yard line; he just ran straight ahead, and their coverage was horrible. He scored a touchdown on an onside kick!!

Rule 6-2-2 states: “Any R (receiving team) player may catch or recover a scrimmage kick in the field of play and advance, unless it is during a try, (field goal) or a valid or invalid fair catch signal is given.”