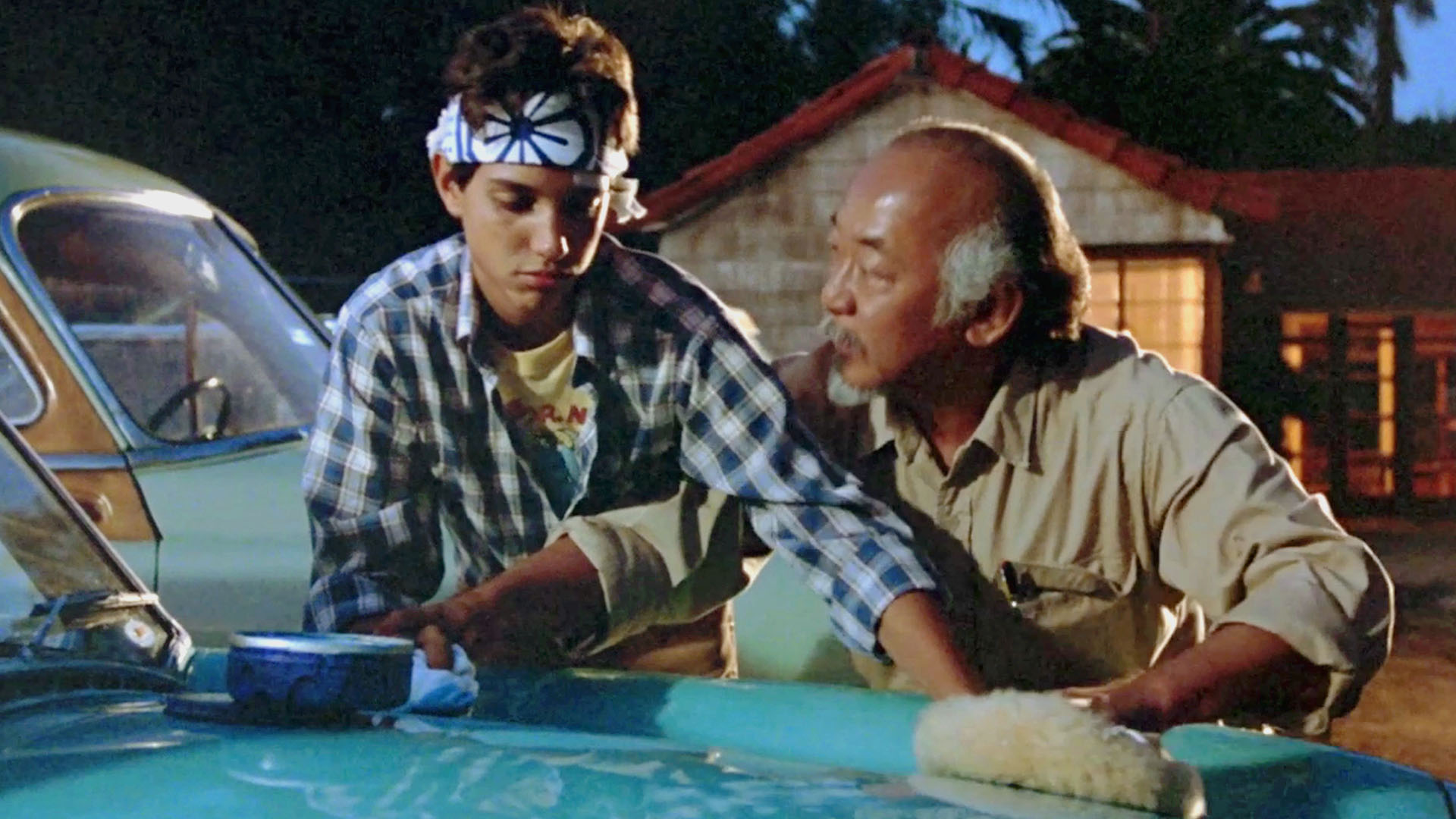 Iconic movie!  (If you don’t think so, stop reading, we are not friends!)

I remember seeing it in the theater, in my little hometown of Fallbrook.  One movie theater in town, all of the cool kids were there.  I was 8.

And I loved Mr. Miyagi.

Here are 8 lessons about coaching from Mr. Miyagi.

You’ve got to be consistent as a coach.  Show me an inconsistent coach, and I’ll show you an inconsistent program, period.  Mr. Miyagi got Daniel working that first day, and working HARD on waxing those cars.  The sun is setting, and he tells him to come back tomorrow, and to be there early!  Mr. Miyagi wanted Daniel there at 6:00 am, an incredibly early time for a teenager; but the day was probably old for the Wise Teacher.

And Daniel shows up!  Miyagi inspired him.

Why did Daniel show up early the next morning?  Because Mr. Miyagi connected with the young boy.  He filled a void that Daniel had: father figure and mentor.  Daniel knew that Miyagi cared about him, from early on.  And he knew that Mr. Miyagi had something for him: knowledge. 3.  Practice Tasks Specific To What Is Needed

Miyagi took his new karate student through a specific set of tasks to teach motor skills necessary for success.  He changed up the practice to meet the needs of the student.  Daniel learned specific skills that he would need to begin to practice karate, and he learned them in a unique way!

Great coaches use practice for specific tasks to what the team needs.

I saw a team win a championship game last weekend on a last minute field goal. It was a tremendous game, and the kid nailed the kick.  BUT, it really should have been blocked.  The defender got the jump he needed off the line of scrimmage.  And he took a great angle, and had enough speed to get to the block point.

However, he didn’t use the skill to actually block the kick.  I watched that play probably 30 times because I was trying to figure out how he didn’t block it.  I sat there wondering if he had been prepared to block a kick, and just didn’t use those tools, or if he had not really ever been taught the exact way to block a kick.  I’m not judging the staff, I wasn’t there for their practices.  But the answer is one of those two things: he either forgot to use the technique, or was never taught the proper technique.

Miyagi was a master at practicing tasks specific to what Daniel needed. “I’ve waxed YOUR cars, I painted YOUR fence, I sanded YOUR floors, when am I going to learn karate?!!”

Mr. Miyagi finally puts it all together for Daniel.

Miyagi and Daniel face off.

“Show me wax on.”  Then he tries to punch the kid in the face!

Daniel fends off the blow with the specific task he learned.

“Show me wax off.”  Tries to hit him again.  Again, Daniel wins.

Great coaches give their players confidence by putting it all together for success. Imagine if Miyagi would have actually landed a strike.  What would Daniel have thought about all of that training?

Give kids confidence early on after learning a new skill or technique or play so that they know it works, and can see the fruits of their labor.  Put them in position to find success early, as Miyagi did.

Then start testing them as they grow and become better at their skill. Miyagi had a plan, executed the plan, and his student flourished.  So many times when coaches talk to me about practice, I ask what their practice plans were, or how much time their staff spends talking about practice.  You’ve got to have a plan.  Coaches who just roll the ball out there usually don’t find the success their capable of.  The best staffs plan out practice in an orderly way; they have a unique plan specific to what their kids need.

The famous “crane technique” that Daniel ends up using to win in the end (sorry, did I spoil it?) was perfected with time.  Daniel wanted to learn it the very first time he saw Miyagi using it that day at the beach. Mr. Miyagi had Daniel learning balance in the ocean waves.  Daniel wanted to move on too quickly, to the next thing: the crain technique.

But Coach Miyagi told him “Must learn to stand, then learn to fly.”

Great coaches teach in progressions, and have patience as students master each progression.  Too many youth coaches are missing this point today!  They are pushing kids far too fast.  Look at youth baseball where now kids as young as 5 years old are having to hit pitched balls.  When we played, we hit off the tee until we were 7-8 years old.

The true genius of Mr. Miyagi comes through in this scene.  Daniel is tired of doing all of this “non punching stuff” and asks when he is going to learn that phase of karate.

“Balance is good, karate is good.”

“Balance is bad, Karate is bad.”

Tremendous insight, and I think this applies to so many sports.  Just like the point above: master one skill at a time.  Great coaches know how to do this, and progress their players through the necessary skills.

Daniel is worried about the upcoming fight.  He is a little stressed out.  It is his first competition.

Mr. Miyagi knew Daniel was worried.  He also knew that Daniel had a love interest because he saw a picture in Daniel’s wallet of that cute soccer player!  (I had such a crush on her!)

“Remember the lesson about balance, it’s not just about karate. It’s about whole life. When balance is good, life is good.”

The best coaches and teachers use their sport to teach about life.