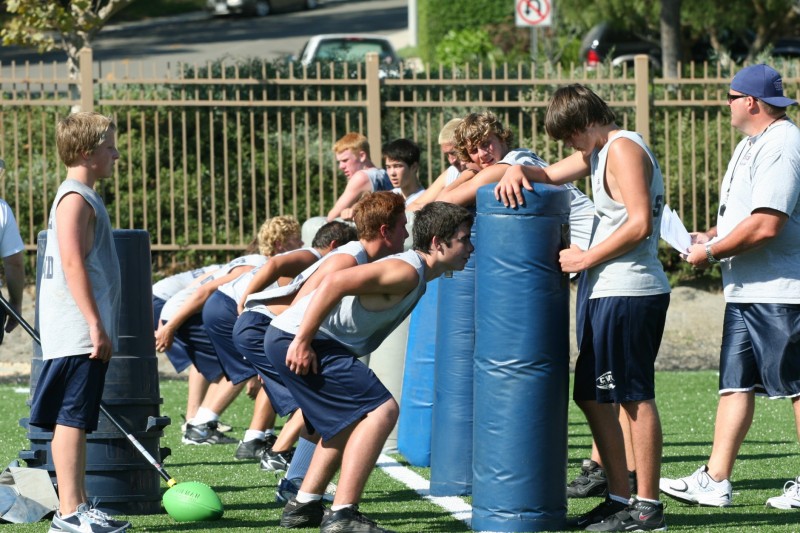 Some coaches are very organized, and some are not.  For some, the idea of having a minute by minute practice plan in the hands of every coach is a “no brainer” and for some it’s a new idea.

I firmly believe that in order to get the most out of every single practice, you’ve got to sit down and plan out those practices minute by minute.  This should be done with your coordinators so that you get their input and buy in for the practice schedules.  I had a great mentor in Perry Krosschell who had just come from the college level while we worked together at Linfield Christian in Temecula.  He was the Head Coach there for a few years, and groomed me to take his spot when he moved to Iowa to start a football program at Unity Christian in Orange City.

Coach Krosschell introduced me to the minute by minute practice plan idea, and I’ve used it ever since.  From your “pre practice time” to your “post practice” time, everything should be planned out and put on paper and in the hands of your coaches so they know exactly what to expect and when to expect it.  There is nothing worse on the practice field than starting a new drill, only to be called over by the head coach for team time.  This won’t happen if your coaches are organized by the practice schedule they should have ahead of time.  For Training Camp, I would give all of our practice schedules out to our coaches before the first practice.  They would get 2 weeks of practices that myself and the coordinators would have put together during June/July.  Obviously, some of these will adjust as you get going but with putting them on Excel, they become very easy to make last minute adjustments. I would also try to get these in the hands of the players, so they know what to expect.  At the very least, I would post it in the locker room before each practice so they could get a sense of what we were trying to do that day.

Below is an Practice Plan for a Spring practice from 2008.  You will see the detail that we have.  This one is set up by position.

One of the biggest practice time wasters is when coaches say “Okay, o line over this way.  Now, go get me those bags in the shed.”  All of a sudden, he is losing 4 minutes of his 20 minute individual time because he wasn’t prepared.  Prepared coaches need to set their drills up before practice begins.  This is key to getting the most out of your practice time together.  Get your bags, cones, balls, sleds prepared ahead of time.  Use your kids to help do this if you aren’t fortunate enough to have managers.  Get your gear to the sidelines nearest to where you will be so that you are ready to go as soon as your time starts.  This will help you make the most out of every single snap. You will see in my Spring practice plan above that we have ten offensive plays scripted out.  Again, I believe this is key to an effective practice.  If you fail to put together a script for both your offensive and defensive team time, you really are shooting in the dark with what needs to be done.  Again, your coordinators should put these scripts together and they should be on the practice plan so that everyone is on the same page, and you can move through things quickly.

Also, this will help you avoid doing some plays too many times, and some plays not enough!  Have your play list right there with you as you put your practice scripts together.  Another thing this script will do is give your plays numbers.  What is more frustrating as an assistant coach, let’s say you are the running backs coach, and you are teaching a kid off to the side, and you don’t hear the play called.  So, there goes the offense to the LOS and they run a play and you don’t know what you are looking for.  As the HC, once we got off the script, I would always yell out the play number a few times so that my coaches knew what we were doing.  This is all a part of being prepared!

This is key to getting the most out of your players AND coaches.  It’s the biggest challenge for me to be honest.  I’m not naturally enthusiastic as some guys are.  I’m more of a pessimist than an optimist.  More of an “all business all the time” type of guy.  I’ve had to work at being enthusiastic as the Head Coach.  Let’s face it, if you aren’t leading from the front with enthusiasm, you either better get some great assistants who are doing this, or find a way to “fake it till you feel it!”

About my second or third year as a Head Coach, some of the guys who had played JV for me, and were now on my varsity team told me that I wasn’t as much fun anymore.  That kind of hurt me.  They didn’t understand that I was now the Varsity Head Coach, not the JV Head Coach buddy old pal!  But in one way, they were right.  I wasn’t having as much fun as the Varsity HC.  I was putting too much pressure on myself, and not letting loose a little, and not being nearly as enthusiastic as I was.  This was a key mistake that I had to fix in order to get the most out of my players.

If you aren’t being enthusiastic, are kids going to be excited about playing in your program?  Are they (and your coaches for that matter) going to enjoy coming to practice?  I believe they need to enjoy it to a certain extent in order for you to maximize your time with them.  Enthusiasm on the practice field spreads like wild fire.  Jump around a little bit, yell positive things!  See what this does for your kids!  If you are not naturally an enthusiastic person, they will love to see it, and you will bring a new energy to the practice field!

Find kids to praise, find kids to pump up, find kids to high five, find kids to encourage.  So many times as coaches we are correcting and teaching and training.  Imagine if your boss never gave you praise, never gave you some enthusiastic “atta boys!”  (For some of you, this isn’t hard to imagine is it?!)  Remember what it was like as a player.  The grind of practice can be hard.  Be enthusiastic in your praise of the kids efforts and attitudes (if they are deserved that is!) and it will make practice much more enjoyable for your kids.  Whether or not you agree with this idea that it’s got to be enjoyable, look for some ways to notch up the enthusiasm this August!