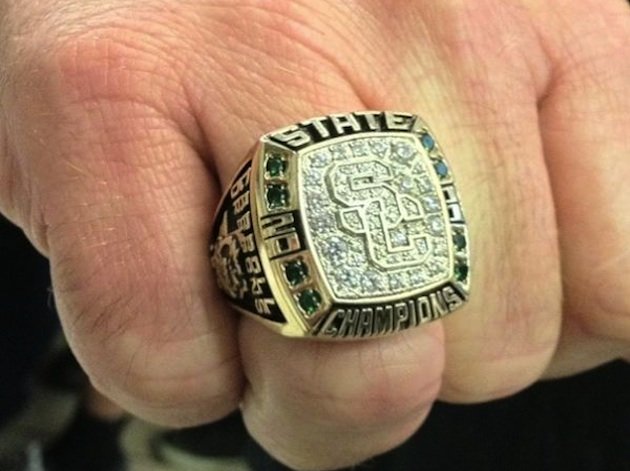 One of the nation’s best known football programs is Carroll High School, better known as Southlake Carroll.  The high school, Carroll High School is in the city of Southlake.  We all know that Texas high school football is big time, and Southlake Carroll has helped to keep Texas in the talk of some of the best teams in the nation over the last decade.  They won their 8th State Title in school history this past 2011 season.  The Dragons finished they year at the #6 team in the nation according to Maxpreps Xcellent 25.

Coach Hal Wasson won his first Texas State Championship this past season, and was named the National High School Coach of the Year by Maxpreps. Here is the profile about the 2011 Dragons football program. The championship ring at Southlake Carroll looks like an NFL ring!

STATE CHAMPIONSHIPS WON AS HEAD COACH    This was his first!

Keep the vision alive with a great work ethic and have the ability to persevere. Mental toughness….it’s not the what, but the how.

It’s not the what we do but the how….Being excellent is the ability to do common things with uncommon discipline and enthusiam.  Don’t get caught up in distractions that have nothing to do with the moment/ play/ game…etc.  This takes mental toughness; which is a learned behavior….

This takes tremendous mental and physical condition.  Therefore, these are things we can control and don’t focus on the things you have no control over.

Being mentality tough requires the ability to overcome adversity.  You will not get there without conquering the adversity…and that’s the toughest part.  And this TEAM chose to do just that.  Always put the emphasis on the TEAM!!!