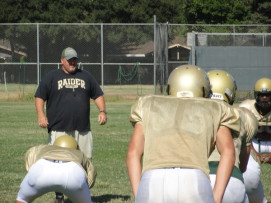 I’ll be honest, this story infuriated me when I read it tonight.

Another high school football coach loses his job while trying to teach kids to commit to something.

1.  Kid tells Head Coach he will miss a varsity football game because he has a baseball “showcase” out of state.

2.  Coach says if you go, don’t come back, you will be removed from team for missing that game.

The kids called the shots.

The principal said that: “Based on the fact that there weren’t any rules, guidelines or expectations given to the players in a written format that they had signed off on, I felt like I didn’t have anything that could support the decision he made.”

There are two sides to this coin.  I agree with putting something in writing for everyone at the beginning of the season.  This might clear up a lot of issues for you, and put all of the expectations on the table.  Having a written policy on the discipline is always a great idea.  I have a bunch of those forms in my Outside The Lines Manual.  But even if there was a written contract, would the kid not have gone to the showcase? I doubt it.

Principal Ginter: here is what I don’t understand sir, with all due respect:

In your school’s very own Athletic Code of Conduct, it clearly states that:

Failure to Participate
If a student/athlete fails to participate without justifiable cause or drops out of a
sport after the teams first league contest, the student/athlete will not be allowed to
participate in any other sport until the season of the dropped sport is completed.

Practice
Missing scheduled practices, performances, or games without approved medical
reasons, or having made prior arrangements with the person in charge may be
grounds for dismissal from the team. Each school will have its own policy on
attending practice sessions.

2. To acknowledge that participation on an athletic team is a privilege, not a right and
as such is subject to the rules and regulations of Rio Americano High School, the
California Interscholastic Federation, the San Juan Unified School District and the
San Juan Unified School District Athletic Department. Student athletes are under
the direction of the administration, the athletic director, the head varsity coach and
the assistant coaches.

Principal Ginter: wasn’t Coach Mahaffey justified to remove this student-athlete from the football program because of the general school athletic policies put in to place, and signed by this student-athlete and parents?  You said that there “weren’t any rules, guidelines, or expectations;” but there were.  I found them myself with a simple Google search of your school’s athletic department.

I’m very curious, as an Athletic Director and 13 year football coach to know why these school policies weren’t applied in this case.  Why was a coach fired for following school policy sir?

This happened to me before, in 2009, with the SAME EXACT baseball “showcase.”

I had two kids tell me they had to go to this same baseball “showcase” that this kid went to.

They went.  I suspended them an entire game when they came back.  One of the kids didn’t like that so he quit.  A starting running back. I let him go.  Where is that kid today?  Let me tell you this, he certainly didn’t get the “promised scholarship” from that “showcase!”  He quit school during his senior year, didn’t even play baseball his senior year, he quit that too.

Folks, that’s what we get when we let kids call the shots!  We teach them it’s okay to call the shots, what do they learn?  (I’m getting fired up again just thinking about all of that I dealt with in 2009!)  That kid that missed our varsity football game, then quit football altogether never learned anything from his “all star baseball” coaches growing up because he was always the star of the team.  And he was treated differently.  He was allowed to break the rules, to bend the rules and to stretch the rules.  Was I around to see this happen?  No.  How do I know?  Because of how he acted in my football program.  And by how he ended up quitting the varsity baseball team when things didn’t go his way!

I don’t know this head football coach Christian Mahaffey, I’ve never met the guy.  But if I ever did, I would say “Coach, great job sticking to your guns and teaching these kids life skills beyond the football field.  I’m sorry that principal through you and your entire program right under the bus.”

Coach Mahaffey, so the principal suspended the kids for one game for walking away from the team. Was this in writing?  He said your discipline wasn’t in writing so he couldn’t support you.  Was it in writing somewhere that “If you and 10 other teammates quit your team in support of another player who quit the team, then get reinstated, you will serve a one game suspension.”  I want to see that in writing.

Coach Mahaffey, this is a tough time to be in the coaching profession.  In so many ways, our hands are tied by the politics in our communities and by administrators who are more concerned with making parents and kids happy than teaching them life lessons.

Coach Mahaffey, I admire that you stood by your policy and had the backbone to stand up for the right thing.

Coach Mahaffey, can you imagine missing one of your varsity football games for an out of season “showcase?!”  Of course not!

Coach Mahaffey, I wonder how those other 22 boys feel?  The ones who didn’t quit.  What has your principal taught those kids?

Coach Mahaffey, I feel bad for you.

Coach Mahaffey, you did the right thing.

Coach Mahaffey, good luck finding a new coaching gig.  I know you might be too sour on it to try to find another gig when a school you’ve been at for so long throws you under the bus.  Hang in there.

Coach Mahaffey, good luck to you in the future.