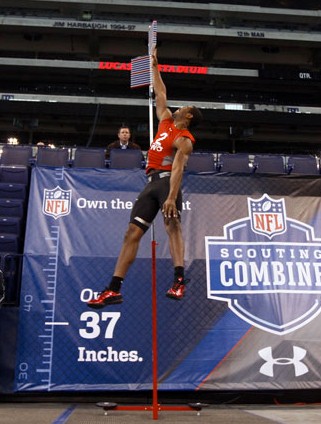 I asked a good friend of mine to share some of his knowledge from the strength and conditioning arena.

Coach CJ Del Balso is the best coach I have ever had on one of my staffs.  We worked together for four years at Capistrano Valley Christian in San Juan Capistrano, California.  He was my Defensive Coordinator and Strength and Conditioning Coach.  Coach Del Balso was one of those hires that I hit an absolute grand slam with because he built an amazing strength program for our football team and athletic department.  Our baseball team for instance broke the school’s home run record every year for the four straight years he had them in the weight room!  When he left, they failed to break the record again!

Here is a short bio for Coach Del Balso who is now in the Dallas, Texas area.

Principles for Developing Power that Transfers to Improved Sport Performance

Explosive power, which is defined as the product of force and velocity, is one particular area that is critical to successful performance in most sports. It is essential to understand that explosive muscle actions occur during a variety of common athletic movements including sprinting, jumping, throwing, striking, acceleration and rapid changes of direction (Newton & Kraemer, 1994).

Generally, individuals who can produce maximum force in the shortest amount of time will be the highest performers in their chosen sport or athletic activity.

Given the explosive nature of movements involved in the majority of sports, power is an obvious area that should be developed in any good strength and conditioning program. Although genetics play a role in an individual’s maximum power output capability, it is still an area that can be improved with proper training. Before explosive power can be developed, it is important to understand how to objectively measure an individual’s maximum power ability.

Routinely testing athletes on the vertical jump test can provide the strength and conditioning coach with valuable feedback regarding power output ability and the effectiveness of a specific training program.

The significance of explosive power for successful sports performance is clearly evident in research studies examining the relationship between the vertical jump and playing ability in various sports.

An excellent example of this relationship is found in a study that sought to identify the performance measures that most significantly correlated with football playing ability among NCAA Division 1-A football players. The results of this research indicated that the vertical jump was the most significant predictor of football playing ability in all test groups including offense, defense and specific position groups (Sawyer et al., 2002).

The positive relationship between vertical jump and playing ability has been validated in female athletes as well. A study on the relationship of jumping ability and agility performance in collegiate female volleyball athletes discovered that Division I players had significantly greater vertical jump heights than players from Divisions II and III. Additionally, it was found that individuals with greater vertical jump heights had quicker agility test times indicating that change of direction ability is affected by one’s ability to quickly generate vertical force (Barnes et al., 2007).

In part 2 of this post, we will begin looking at the best methods for developing explosive power that transfers to improved sport performance.