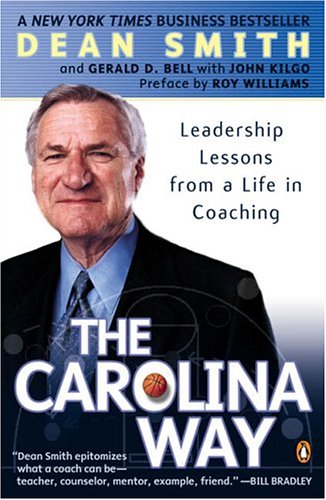 Earlier this week I put up a list of books for summer reading.  I made a suggestion for the top 5 books I’ve read regarding coaching.  And some other coaches recommended others to me.

I did this book review during one of my Masters’ classes. I thought some of you might enjoy reading it.

I highly suggest this book.  It’s a GREAT read.  I learned a LOT!

I choose to read a book titled The Carolina Way by legendary Head Coach Dean Smith. Coach Smith wrote this book at the end of a phenomenal career as a NCAA Division 1 basketball coach at the University of North Carolina. It was published in 2004. The tagline is “Leadership Lessons From A Life In Coaching,” and that is exactly what this book aims to accomplish. Coach Smith wrote twenty six chapters about the lessons that he learned from his life spent in the trenches among the very best collegiate basketball players to take the court.

The reason that I purchased this book is because I strongly believe that as a coach I am a lifelong learner. I continually keep my nose in the pages of books written by those that have been to the highest mountain tops in sports.
Although I coach football, I read books from people from all walks of life, that have succeeded in their fields of specialty. The focus that Tiger Woods needs during a golf tournament is the same focus that my high school football players must have before a football game. The lessons taught by financial CEOs can help me with my organizational management. My favorite books are those written by coaches; coaches from Major League Baseball to the National Football League to world class tennis – it doesn’t matter to me – they all have something important to say.
This book by Coach Smith was no different. It is CHALK full with vital information for any coach at any level of play.

Here is a sample of the chapter titles: Winning, Practicing, Fun, Fatigue, and the Long Season, Team-Building Techniques, Earning the Support of the Bigger Team, Continuous Learning, Don’t Dwell on the Past, Goals and Expectations. As you can see by these chapters, this book covered just about everything that a head coach could cover in writing a book about the leadership lessons that he learned over a life time of coaching. Honestly, I can’t think of anything that was NOT covered in this book by Coach Smith. The thing that I really liked about this book was the format of it. Two things about that – the way the book was formatted all together, and then the way each chapter was formatted. The book is put together in five parts: The Foundations, Playing Hard, Playing Together, Playing Smart and Lessons Learned. In each of these parts, there are from four to eight chapters. I really like this format because Coach Smith starts with the first principles he learned, walks us through teamwork, practicing, winning, losing, building confidence, then goes to things off the court and finally big picture ideas of being a coach. Each lesson kind of builds on each other as he goes. However, you could also simply pick up the book and read a chapter about something specific. I did that just this past week. I went and re-read the chapter on losing because we have just dropped two games in a row, and it has been a tough couple of weeks for me! So, I opened up right to the chapter on losing to see what he had to say, to review the principles that he gives the reader in regards to losing.

I especially enjoy reading the “Player Perspective” because in my eyes, it puts the whole piece together. For instance, Chapter 19 is titled “Building Confidence.” Former player Eric Montross from the class of 1994 who was the starting center on UNC’s 1993 National Championship team, and now a player in the NBA, gave the player perspective. You can tell by the way that each player writes, he was most likely asked to write about a topic and how Coach Smith handled that topic. Eric gives the reader a great insider’s perspective on how Coach Smith taught the players to have confidence. He says “When we scrimmaged in practice, the score was not put on the arena scoreboard. Coach taught us, and instilled in us the confidence, that we would win if we executed our plan correctly. His players believed this implicitly.” It would be one thing for the writer of this book, Coach Smith to tell us that his players trusted him and believed in him. But to have a player give his very own perspective is a key ingredient to this book that I kind of view as the cherry on top!
I really enjoyed reading this book. I have been surprised at how many times during my own football season that I have used this book as a type of encyclopedia. There have been many times that I have gone to it just to see what Coach Smith has to say about certain topics. I believe that this is a book that will be on my shelf for a long, long time, and I highly encourage every coach to read this book if they are seriously considering a book on leadership.