2.  There will ALWAYS be issues with parent’s and playing time.

The first time I heard this “joke” was from the very first Athletic Director who hired me as a Head Football Coach, back in 2003.  It goes like this: “You know the best place to coach right?”  Answer: An orphanage, there are no parents!

I laughed hard.  Then I thought about it, and went to Google “coaching jobs at an orphanage” to find any job openings!  (J/K! I didn’t do that!)  But I did like the joke.  There is a lot of truth to the fact that it would be much easier to coach if parents just did their job: parent, and let the professionals coach.  I suppose that is where the rub is, high school coaches just aren’t seen as professionals anymore.  For many parents, we are usually seen as a means to an end: scholarship!

Two words that will go down in the coaching vernacular as curse words right?  We hate talking about playing time with parents, and rightly so.  It is our right as professional high school football coaches to determine who plays where, for how long they play, and why they play.  We are trained to do that.  How have we been trained?  Through the sweat, tears and blood spent on the gridiron for years and years and years.  Some of us have masters and doctorates in “coaching.”  We certainly have enough credit hours!

1.  Their kid is their pride and joy.  EVERYTHING in their life revolves around their child, and HIS best interests, not the team.

(I understand that this might be a gross over generalization, but unfortunately it is commonplace these days.  Individuals are more important than teams.)

2.  We have failed to communicate clearly about playing time issues.

I made what some might say is a gross over generalization about parents above, and I’ll make one about coaches here: most coaches fail to communicate about playing time in a way that is effective, meaningful and honest.  In fact, we stand up at preseason meetings and say “I’m not going to discuss playing time with you.”

Well, what does human nature want to do in every parent?  And who are  YOU not to discuss MY child?

So, I have a suggestion coaches!!

Get up at your next preseason meeting and tell parents that you WILL discuss playing time with them.

And here is how you will discuss it: you will take them to the practice field, and show them how their son’s ability does not equate to the playing time they desire.

In my first year as a Head Football Coach, at the ripe old, veteran age of 27, I had a parent emailing, whining, complaining, discussing, and talking about his son’s playing time with every Tom, Dick and Joe in and around our program.  He was really becoming a thorn in our side.  My first thought on getting this issue resolved was: “I’ll just take him down to the practice field, line up the other kids in his position group, and SHOW dad why he is not starting.”

Then I discussed with my coaches, and they LOVED the idea. I sat on the idea for a while, and thought deeply about the ramifications of using this technique.  Then I got an email from dad.  So, I went there.

“Dear Mr. (Last Name), Thank you for your email.  I appreciate parents who are interested in their son’s football efforts, and our team.  Since you are not agreeing with my coaching staff’s appraisal of your son’s abilities, I’d like to invite you to come to the practice field for just a 10 minute observation.  Your son will have no idea why you’re there.  All you will do is stand with me, and watch your son.  And we will evaluate how he does compared to the other 6 kids in his group.  If you are interested in doing this, please let me know so that we can schedule it.  Sincerely, Coach Fore”

He responded about 6 minutes later with “game on.”  Interesting response.

Dad was there right next to me for about 15 minutes.  I told him to just watch. But he wanted to ask questions.  So I answered them. They were about the drills we were doing, and why we were doing them.

Then something really interesting happened.  He turned to me, and said “You’re a good man Coach Fore.  Thank you for having me down here.  (Son’s name) has some work to do.  That’s obvious to me.  Have a good day Coach, and thank you for this.”

Did you notice that I didn’t have to give his son a verbal evaluation?

I didn’t explain to dad how he didn’t match up.  Dad just watched.  And he figured it out.

Because it was clear: his son wasn’t a starter.

A few years later, I had another dad who wasn’t happy with his son’s playing time.  A QB on our JV team.  I used the same technique, brought him down to practice.  I said “We are going to watch 5 plays, and I guarantee your son is going to go the wrong way on at least three of them.”

Sure enough, the kid went the wrong way on three of the five base plays we had him run.  Son had no idea why dad was talking to dad.  I just told our coach to run our five basic plays: a power, an option, a trap, a play action roll out pass, and a waggle.

Same thing happened.  Dad shook my hand after those 5 plays, and said “You won’t hear from me again.”

I’ve used this unconventional technique just twice in 8 years of coaching.  I highly recommend it for that parent that really needs answers. 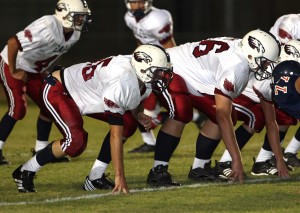