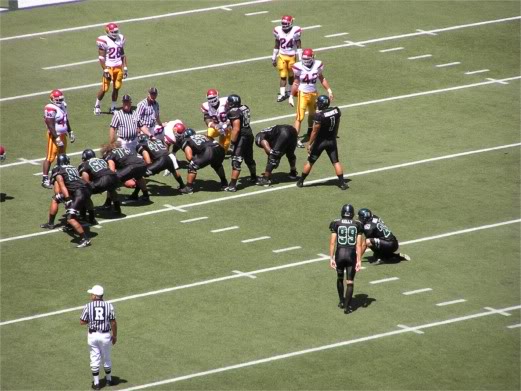 CAN THE KICKING TEAM RECOVER AND ADVANCE A FAILED PUNT OR FIELD GOAL ATTEMPT?

Think about this scenario: the punt is blocked, and now the ball is squirming around on the ground behind the linemen, behind the line of scrimmage.  Or, like in the famous Dolphins/Raiders Thanksgiving game in the snow in the 1990s, the Field Goal attempt is blocked, and then the kicking team picks it up and runs it in for a touchdown!  One of your guards is a heads up football player, so he simply picks it up and runs with it.  In fact, he runs past the first down chains!   Is this allowed? Or does the team who blocked it retain possession?

Rule 6-2-3 says that “Any K (kicking team) player may catch or recover a scrimmage kick while it is in or behind the neutral zone and advance it, unless it is during a try (extra point).”

Simply put, a punt is a scrimmage kick.  Therefore, any member of the punt team is allowed to catch or recover a punt as long as it is behind the neutral zone, basically the line of scrimmage, and then advance that ball.

CAN THE PUNT TEAM ADVANCE A FAILED PUNT ATTEMPT THAT GOES BEYOND THE LINE OF SCRIMMAGE?

Let us pretend that that a blocked punt bounces off a defensive lineman and ends up on the OTHER side of the neutral zone, it ends up past the line of scrimmage towards the opponent’s side of the field.  Can the offensive guard then pick it up and run?  Sadly, no. The key here in the rule is that the defensive lineman who blocked the kick was NOT “beyond the neutral zone at the time of touching.”

WHAT ABOUT ADVANCING A FAILED CATCH BY THE PUNT RETURN TEAM?

If the punt return team botches the catch, the ball squirts out and on to the ground, and the punting team then recovers the ball, the above rule applies:

So, the punt team gains possession of the ball, but can’t advance it.

CAN THE PUNT RETURN TEAM ADVANCE A FAILED PUNT ATTEMPT?

Think about the same scenario: blocked punt, ball squirming around a few yards behind the line of scrimmage.  Your defensive tackle sees the ball, picks it up and runs 23 yards untouched in to the end zone.  Is this a touchdown?  YES!

Rule 6-2-2 says that “Any R (receiving team) player may catch or recover a scrimmage kick in play and advance it unless during a try (field goal attempt) or a fair catch signal is given.”

Therefore, the receiving team always has the right to pick up a blocked kick, a bad snap, and advance the ball toward the end zone.  It doesn’t matter where on the field the ball is if the return team picks up the ball.  The punt return team can advance the ball no matter where it ends up.  If it is a bad snap, that is just like a fumble by the quarterback on third down: the football belongs to anyone who gets it!

I hope that you have become better informed about these “odd” Special Teams rules and situations.  I certainly know that I have been enlightened by some of these scenarios!