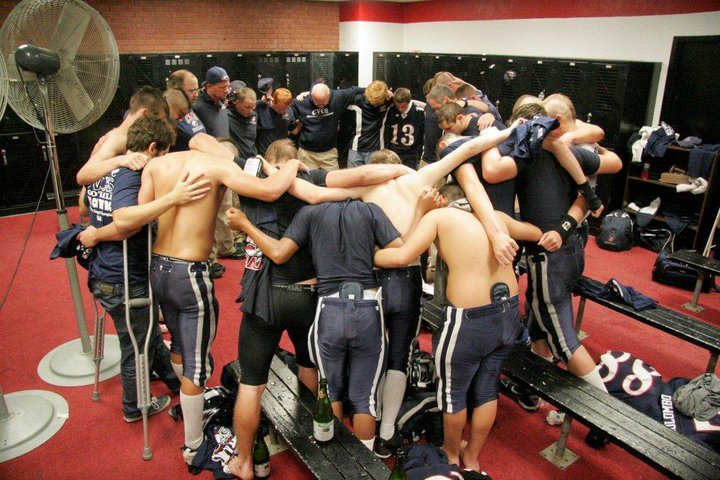 Before our very first football game in 2010, I was assigned to give the pre game speech.  Since I was the Head Coach, I always did the first one, and I would usually use this time to kind of set the tone for the year regarding our theme.  I would have the entire offseason to prepare for this talk, which was nice.

Since I’m a Christian, and I was coaching at a Christian school in 2010, I wanted to have a Biblically-based theme for us.  Not that I think you should always have one at a Christian school, but I think it’s a great idea to involve Scripture in your theme.  I think that the Scriptures have a lot of sports oriented themes in them, which also apply to life.  So, I started to pray about a theme for the year, and for a great Bible verse to apply to our team.  I asked God to show me a verse that we would be able to point to, and challenge the team and coaching staff with throughout the course of the year.

Sure enough, on July 1st, on the floor of our living room, God gave me the most appropriate theme for our season!  It was during our family devotion time at night.  My kids were 2 and 4 at the time.  We had a children’s devotional book and each night we would read one page from it, and pray with our kids.  Still do to this day!

“Therefore everyone who hears these words of mine and puts them into practice is like a wise man who built his house on the rock. The rain came down, the streams rose, and the winds blew and beat against that house; yet it did not fall, because it had its foundation on the rock.”

“There it is” I thought to myself!  BUILT ON THE ROCK!  This would be our theme for the 2010 season.

Not only would this be a great theme to rally around for our team, but it would serve as a great teaching point “outside the lines” and “beyond the season.”  Coaching the heart of the athlete is just as important as coaching the body of the athlete.  This verse and idea would be a great lesson for all of the players and coaching staff.  I gave each of the players a rock with “MATTHEW 7:25: CVCS FOOTBALL 2010” written on them on black sharpie.

I had no idea just how great of a theme this would be for this specific team!  We faced the greatest adversity as a team as I had in 12 years of coaching.  In our first game, we lost our QB to what we thought was a torn ACL, in our first game!  Praise God he was able to come back from that, and it wasn’t in fact torn, but we did lose him for a few games.

In our third game, we lost our starting middle linebacker/offensive guard to a broken leg.  A broken leg!  The ambulance pulled right out on the 10 yard line, that’s how bad it was.  We lost him for the season.  The week before this devastating injury, he had 17 tackles!!  That same game we lost our backup quarterback, who had to start because our first string guy had his knee injury!  A few weeks later, we had ANOTHER broken leg, this time to our starting fullback.  It was unreal, it happened in just about the same place, and again, the ambulance drove right out on the field to take him away.  What we went through as a team that year was unreal, more adversity than I had ever seen a football team endure in one season.

My talk before that first game issued a challenge to the team: WOULD YOU RATHER BE ON A TEAM THAT  IS:

I shared a few illustrations of people I knew who built their lives on the ROCK and those who had not.  I shared a few illustrations of teams who had built their team on the ROCK and those teams who had not.  I think that the Lord was able to reveal to our team that day, why we should build our lives on the ROCK OF GOD versus the sand of this world.  I shared many other verses about the Lord being our ROCK.

Well, we were able to go on and have a great season.  We went 5-0 in our league, beat the team who had won our league an incredible 7 years in a row!!  What’s more is that we beat them at their place. We had 10 kids suited out, they had 24!  (This was 8 man football.)  We were up 24-22 with about 1:30 in the fourth quarter.  Our kids were just DEAD.  And they were driving.  But we held solid, and a player forced a fumble for what ended up being a game saving play.  A few plays later, we faced a 3rd and 9 from our own 30 with about :40 left in the game.  Convert and the game is over, fail and we have to punt.  We got it!  We completed a pass and ran it down to the 10 yard line.  I’m not sure that we would have made those two big plays had we not been tested during the season.  I know we wouldn’t have made those plays if we weren’t BUILT ON THE ROCK!