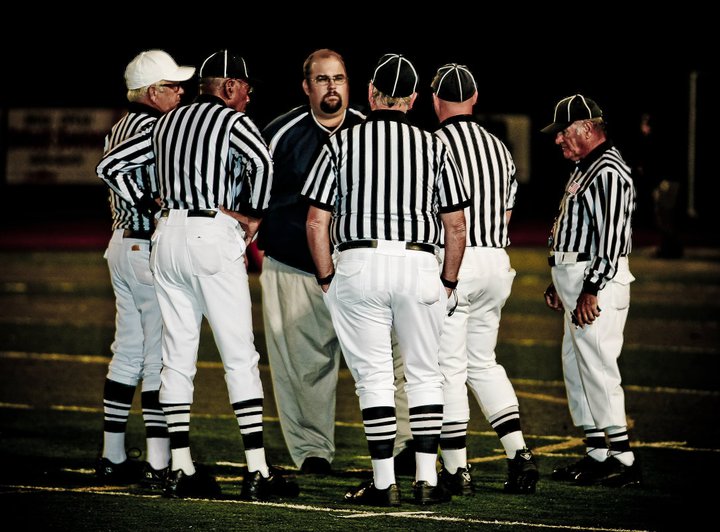 Here I am in a pregame meeting with the officials in 2008.

They are the “necessary evil” right?  The men in black and white.

Let’s face it: not many of us (football coaches) are signing up to be an official anytime soon.  It’s a tough job.  It’s a frustrating job!  It’s a thankless job.  But without the five officials, we just don’t have a game now do we?!

Therefore, let’s discuss how we can do OUR best as the responsible adult leaders that we are.  I learned from a mentor of mine (Perry Krosschell, Head Football Coach at Unity Christian in Orange City, IA)  before I became a Head Coach that these guys really do their best, and we need to respect them.  I was just riding this side judge one night during my first year coaching with this mentor of mine, when he told me in no uncertain way: Shut your mouth Fore!!  The next day he had a long talk with me, and I’ve never looked at the officials the same again.

The officials are NOT our adversary on Friday nights.

And if you are the type of coach who thinks they are, I’m sorry to say it, but I think you have some issues to work out, much like I did at 24 years old!

Here are 5 ways for you and your staff to get along with the officials in a better way than last year.

How much time and energy have you spent reading the 2013 NFHS Football Rule Book this year?

If you are a Head Coach, I sure hope you have looked through it.  How many times have we as coaches argued a rule that we REALLY didn’t know, and then ended up looking like an idiot later for not knowing what we were SO certain we thought we knew?!

Every year there is a press release from the NFHS with “new rule interpretations and points of emphasis.”  You can read the 2013 one here.

Since I started taking the officials more seriously, I’ve become more of a student of the game.  Now when I see young coaches yelling about something they are totally wrong about, I think to myself “You look like a moron buddy!”   (That was me 10 years ago!)

Coaches, you need to read the rule book, and know the rules.  I’ve had coaches on my staff yell at officials and make our staff, football program, and school look really bad and they were totally WRONG!  If you don’t spend time studying the rule book, you have ZERO basis to challenge a rule.

2.  YOU ARE NOT A SPECTATOR

Sometimes coaches forget that they are professionals on the sidelines.

I think this is one of the key errors many younger coaches make as they are coming up. They forget that they are there to coach, and to teach, not be a cheerleader.  Yes, that is part of the coaching job, to encourage your players and lead them.  But remember, you are not there on a Saturday afternoon or Sunday afternoon or Monday night. You didn’t buy a ticket! You are a professional, act like one.  Stay off their backs!

“If you want to yell at the officials, go buy a ticket!”   I’ve used that line on quite a few younger coaches on my staffs!

3.  DEVELOP A RELATIONSHIP WITH YOUR LOCAL OFFICIALS OFFICE/UNION

One of the best things I’ve done for myself as a Head Coach was when I took a job at a new school out of the area where I became a Head Coach.  It made me reach out to the officials in that area.  It was in Orange County, CA.  That unit is called the Orange County Football Officials Official’s Association.

I reached out the VP of that organization because I found out from their website that he lived close to our school.  I asked him come down and talk to our kids and staff about the new rules that season (2006).  So he did.

Here’s what I found:  the officials are ALL ABOUT teaching kids and coaches!  They were more than willing to come out and spend a few hours with us.  They did a seminar on new rules for about a half hour.  Answered questions from the kids and coaches, and then came out to practice to help us.  It also got them some work, so it was mutually beneficial.

That VP of the officials association would call me from time to time in the off season to ask me questions on how to reach and teach other head coaches and athletic directors.  So, I originally reached out to him, but then he started reaching out to me.  He came out for a few years in a row for us, to teach us and to cover some practices.  It was very, very helpful for our team to have the officials there at training camp.  I can’t tell you how important this became for our team.

The other thing I found out is that the officials LOVE this.  They love when coaches are proactive.  They had an open house to teach coaches the new rules one summer.  Only TWO of us showed up!

Only two out of more than 100 coaches showed those officials who led that seminar what they thought of their job.  These guys had put together a dynamite power point to teach us the new rules because they LOVE the sport, and they love teaching it.  Yet most coaches blew off this training.

What it did for me was help me build that relationship.  The VP of the unit introduced me to the President of the unit.  He said “Oh, you’re the guy down there at Capo Valley Christian, great to meet you.  Thanks for taking us seriously, it means a lot!”  Guess what happened that year, he came and did one of our games!  And we usually got the new guys because we were a small school.  I noticed a HUGE difference in his unit and the units we usually got!

I’m standing on the sidelines at a college game a year later, and this official starts yelling my name during a timeout.  Then I recognized this man, the President of our unit.  I went over and shook his hand.  That was a pretty cool thing.  I had no idea he officiated college games too.

Listen, when was the last time you yelled and yelled at an official and things got BETTER?!

When is the last time you went bezerk over a call and they reversed their decision and agreed with you?

It just doesn’t happen!  In fact, usually the opposite happens.  If you as the Head Coach, or one of your assistants is all over the officials, you are probably going to get some extra flags.  That is just how it happens!  It’s part of human nature.

So, back off, let them do their jobs, you do yours.  You focus on coaching, and trust the officials to do the officiating.  There is a high probability that NOTHING you say will change the official’s mind so why let that effect you?

I’m just as guilty as ANYONE at letting the officials get under my skin.

I will admit that I’ve lost focus during a drive, or a quarter or a half because I was so pissed about a call or set of calls.    And you know what, that impacted my team negatively.  It did NOTHING positive for us!

So, just let them do their job, you do yours and things should go pretty smooth!

I hope this gives you a new perspective on dealing with the officials.

Some of us need to grow up!!