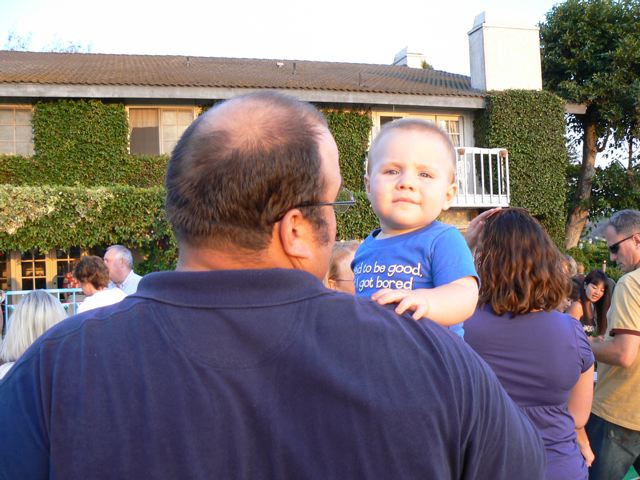 My son with me at a team function at right about one year old. My son is the most handsome kid in the world right?! (Every parent thinks this right?!)

How To Handle The Over Bearing, Over Involved, Over The Top, Over (fill in the blank here) Parent – Part 1

It seems that I have been getting a LOT of questions about this topic lately.  Some sample questions from social media and email I have had in just the last few weeks:

“Coach, what do you do with a parent who just doesn’t trust you about her son’s playing time?”

“What do you do to limit parent complaints in your program?”

“How do I work better with parents so they stay off my back?”

“Do you give your coaches tools to help with parent-coach relationships?”

I have been coaching high school football since I was a senior in high school myself. (A car accident ended my playing career between my sophomore and junior year.)  I coached frosh football at Fallbrook High School (North San Diego, CA) that first year.  On day two as a coach, I had a parent complaint about me!  Imagine being 17 years old, and sitting in the head coaches’ office with two parents across the desk from you, on your second day of coaching!  I had thrown a ball at a kid during stretching (. . .kind of!).

It was something coaches did to us when I was on that same frosh team!  Some of the coaches who coached me, I was now coaching with.  And there we stood, throwing balls at kids, all out of FUN as they were stretching!  I was now one of “them” –  a coach!  And it felt great!  As the stretching daily tradition was, we would simply throw these balls as “bombs.”  We would throw the balls as high and far as we could; the kids were lined up 5 yards apart on lines by a few yards apart.  About 60 kids in a huge square like the game Battleship.  You hardly ever hit anyone because there was so much space between all of the kids.  It was ALL out of FUN!

But guess what, Johnny and his parents thought that I: aimed it at him, threw it at him, did it out of anger and did it with malice!

By the time the story got home, it was a laser beam directed right at Johnny from 3 yards away out of anger!!

The most important thing I learned from that first meeting with parents, and has been reinforced over 14 years as a coach, and 6 as an Athletic Director, is this:

Communication is KEY!!!  It is THE most important part of working with parents.

3 Keys To Communicating With Parents

The first person I ever heard this statement from was Coach Lou Holtz, but I know he didn’t create it: “You have two ears and one mouth, therefore you should listen twice as much as you speak.”  I believe that listening to parents is one of the most important ways to communicate with parents.

One thing I have learned from all of my years coaching, and even more now as an Athletic Director, is that if you take time to listen to the concerns of a parent, so many times that listening and caring alone will “defuse” them.

If you are having a meeting with parents, it is probably to the point where they are pretty ticked off.  And they are going to be emotional.  Remember, they are emotional because of their love for their kid.  To diffuse that emotion, LISTEN!  Don’t start firing off and defending yourself.   If you are on the defensive right away, you aren’t listening to them.  They want to be heard first and foremost!