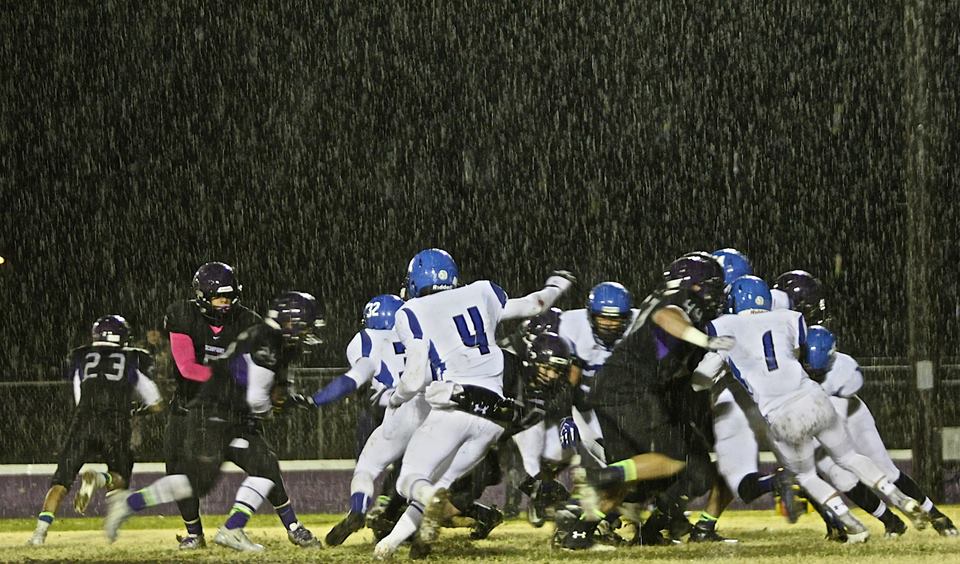 Is this you?  Have you “slept” right through preparing for a rainy game?

I don’t know where you were on Friday night but I stood on the sidelines of a very exciting quarterfinal playoff game.  The team that was picked to lose by about 18 points had a chance to win it in the last two minutes, but they weren’t able to.  However, it might not have been that close on a dry field.  The favored team had much faster athletes and much bigger athletes.  That was all neutralized though during the night because of a steady downpour that created less than ideal conditions.  A few head coach friends reported to me over the weekend that the rain definitely changed the game.

What’s your game plan when it rains?

Do you have one?  Do you seriously think through everything that needs to be different? Or do you just throw a few towels in the ball bag?  Here are some ideas from my experience as a head football coach.

If you know it’s going to rain, go over your game plan to see what kind of adjustments you might need to make.  For instance, if you are throwing the ball in seven of the first ten scripted plays, you might want to think about changing that script a bit, unless you have a very proficient passer, and feel comfortable with him throwing that much in the rain.

Are there any fake plays you have on your play card that you need to take off of it because of the conditions?  Think about this before the game.  What about your two point play to win the game?  Still a good one in the wet weather?  Confident in your snap, hold, kick?  Will you kick a PAT or field goal to win the game if it’s raining?  Talk about these things coaches, don’t snore on them!

Get with your staff either the day before the game if you know it’s going to be a wet night, or the day of the game if a storm moves in.  Get together as early as you can to discuss any game plan changes so that you are all on one page with any new approaches being dictated by the weather.

I was at a rainy game this year and saw a running back fumble twice in the first half because of the rain.  I was on the sidelines.  This poor kid was trying SO hard to keep his hands and forearms dry.  I never saw a coach help him get dry on the sidelines. You know what would have really helped him?  A towel!!

I’m amazed to see coaches not prepared for the rain by not having towels on just about every player on the field.  This is one of those thing you need to get together in the summer.  Get your “rain bag” with a bunch of strips of towels that can be taped to your players’ belts.  I like to put part of the towel up through the belt, pull it out about four inches, and tape it to the other part of the towel.  Tape it REAL tight so that it just simply can’t come off his belt.  A rain game where only one player on the field has a towel = an unprepared coach!

Remember to save some towels for the second half too!  I’ve seen that before as well.  A team goes through all of their towels in the first half because no directions were given to the volunteer, 12 year old ball boy!!  Part of your “rain bag” needs to be a LOT of towels for the balls.  In fact, you really can’t have TOO many towels, you just can’t.  And leave half of them in the locker room so that you set for the second half.

Seems obvious enough right?  I’ve seen coaches getting AFTER ball boys for not keeping the balls dry.  But have you as the head coach ever instructed your ball boys on how to do this?  Do you tell them what to do with the balls when the defense is out on the field?!

One idea is to have a large Tupperware storage bin on the sideline to keep the balls in.  One that seals up with a lid.  Keep your balls in this, not a bag that will just get as wet.  Some teams use an eazy up on their sideline as well.  A good idea.

So many teams are playing on field turf these days that you might not need a cleat cleaner. But, if you are playing on grass, don’t forget to bring one.  Also, have some screwdrivers to pull mud out of the cleats.

Think about changing out the cleats too.  If you know you’re going to get rain, replace the studs on your kids’ cleats with longer ones.  Some kids will think about this, some won’t.  I would hate to see my running back slip on a very important play, and then realize that his cleats are very low, and haven’t been changed since August!

Most coaches out there laminate their play cards for the game.  I’ve never felt comfortable doing it any other way.  Tried a manila folder once, hated it.  But for those who don’t laminate your play call sheets, what are you going to do when it rains?  You can put your sheet in a plastic sheet holder to help, but make sure to tape the top of it so there is no leaking.  Lamination is the best thing to do.

Remember your stat crew too.  Prepare for this ahead of time or you will have crap for statistics after the game.  Again, something you probably have to train your volunteers to do.  Perhaps there is a room in your press box for them to do the stats from in a rainy day?  If not, make sure to have a JV kid holding a big umbrella over them to keep those papers dry.  And tell them not to worry about using a lot of sheets.  Keep your stat bag dry too.  Put it in a trash bag under the bench, or under your tent if you use one.

In 2002, I was the Varsity O Line Coach/Special Teams Coordinator at Linfield Christian in Temecula, CA.  It was the first rain game of my career.  Here in Southern California, don’t have to worry about rain games much!  So, in my first three years of coaching, never had one.  And since I wasn’t a Head Coach, didn’t really pay much attention to the weather.  So, I had ZERO clue that we were going to get dumped on when we traveled to Twin Pines, an incarceration facility for juveniles.  Interesting place to play!  The “teachers” walk around strapped!

Guess who had to ride home for an hour and a half in a bus absolutely freezing, muddy and wet?!  You guessed it!  Yours truly.  That was the LAST time I’ve ever ridden home wet.  I’ve always packed extra clothes for after the game, even if only a twenty percent chance of rain!  That is how stinking much that trip home sucked!  In fact, I’ve even changed at halftime at one game.  Brought two extra sets of clothes, because I knew it was going to be a very wet game!

These are some tips for rain games!  Did I miss something? Would love to hear of any ideas you have!