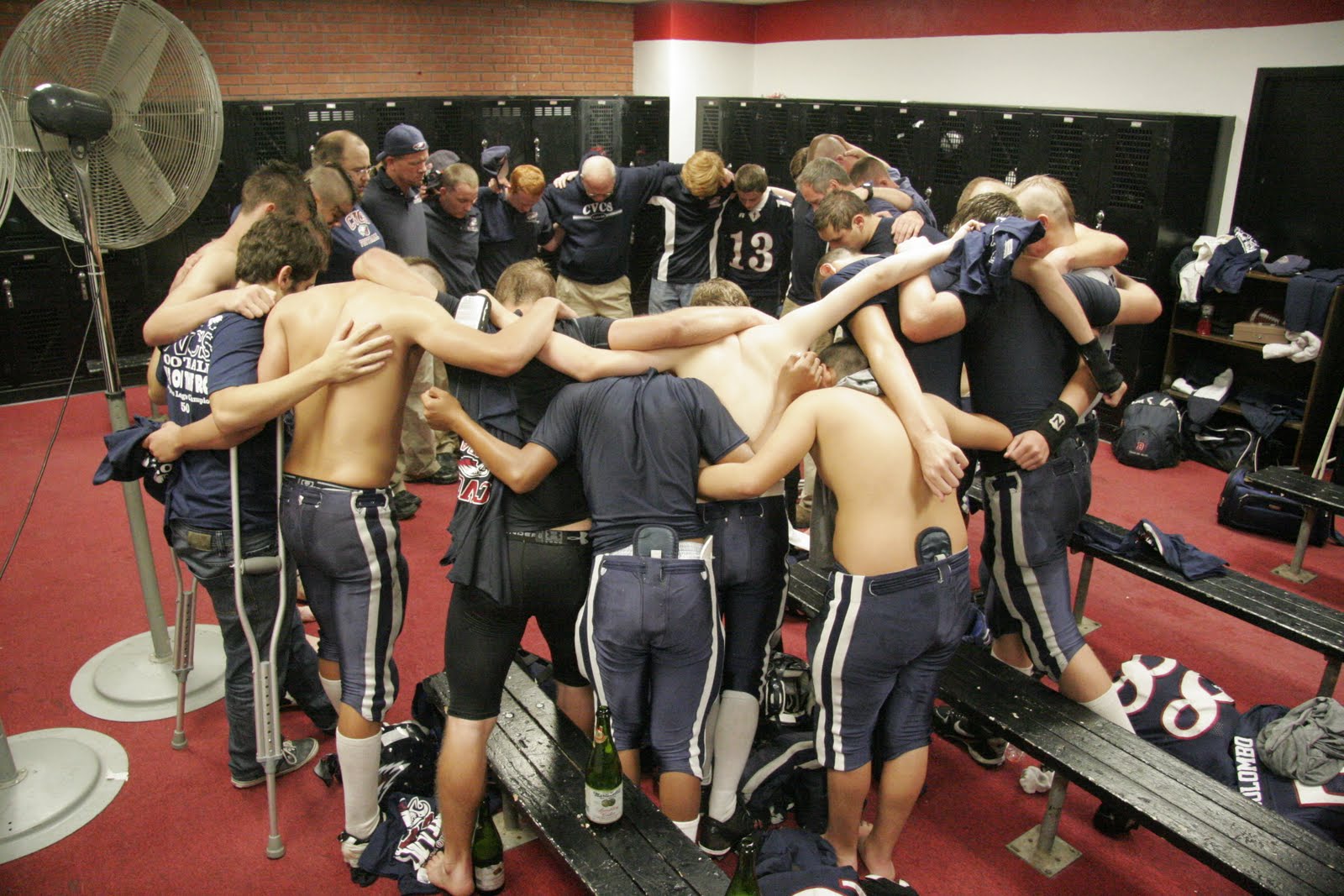 I stole this idea right from my high school days. At Fallbrook High School, Coach Tom Pack would arrange trips for us during Training Camp.  There was a time period where we went somewhere every other year for a week of Training Camp.  During my junior year it was University of California Santa Barbara.  The following year, we would stay three or four nights in our own gym.  This meant we did not have to fundraise every single year for a trip.

I love this idea of getting everyone to stay at the school for two to three nights during Training Camp.  There is just something great about having your kids and coaches sleep on blow up mats right on campus.  I have organized it so that parents come in and take care of all of the food.  Kids are responsible for the entertainment and bedding.  So, we have had some kids just come in with their sleeping bags and some bring in their mattresses from home.  They bring in and set up video games on the big screen, have music, etc.  It is a great atmosphere for building chemistry.  We are literally on the field or in the gym together for seventy two hours straight! I always like to pair my incoming freshman with a senior.  I instruct our seniors that they are to be like “big brothers” to these new kids to campus.  I tell them to make sure to check in with their freshmen between every class and at lunch on the first day so that they know where to go, how to find what they need, etc.  I also ask our seniors to help mentor and tutor their kids throughout the year Again, this program helps to naturally create chemistry.

Off the field fun nights

I have always been a big believer in getting away from the field as a group.  I like to periodically take the entire team to a bowling alley, movie theater, or restaurant in town to help build team chemistry.  I think that it is important to do this in season and out of season.  Thanks to the advancement of social media, we have seen videos of coaches like Pete Carroll surprise his team with a movie night in the middle of training camp.  You see these college kids jumping all around and very giddy when they get a break like this.  A few years ago, my team made the section playoffs for the first time in several years.  There was a lot of pressure on them from all different sources.  I wanted to help alleviate that pressure they felt, we were a young team and I did not want them to crack under it.  So, the night before the game, we all went out to dinner and to a mini golf place together.  We did this just to have fun together, and to hopefully take their mind off of the game for a few hours, to help them relax. Swim party and skits to celebrate the end of training camp

I have used a great tradition to celebrate the end of training camp.  We have a pool party at one of our kids’ homes.  It is a big barbeque that our parents put together for us.  We will have a morning practice, be done by 11 am and head over to a house for a few hours.  Again, it’s one of those built in chemistry-builders.  The kids really look forward to it, and I have parents knocking down the door to host it.

At this pool party, we will have the underclassmen do skits.  We always give them a few days to practice and prepare for these skits.  It is always been fun to see them get more and more creative as the years go on.  Usually, the skits revolve around making fun of and mimicking the coaching staff and seniors.  I do not think we laugh as hard all season long as a team as we do during those couple of hours.

I stole this idea from Bob Laddoceur at Concord De La Salle. Our staff spent a few days up there a few years ago, and one of the things we really loved was how they do goal cards.  The kids come up with three goals per week, and must come with those written on an index card.  The three areas are: game goal, practice goal, and lifting goal.  At our team meal on Thursday nights, each kid stands up verbalizes his goals, and then chooses a teammate to hold him accountable to those goals during the next week.

For instance, “my game goal is to catch every ball thrown to me, my practice goal is to work on catching for fifteen minutes after each practice, my lifting goal is to do two more reps during my clean max.”  At the next week’s meeting, whomever he chose to hold him accountable will stand up with him and say “Johnny made his game goal, he got all four passes thrown to him, he reached his practice goal by the extra practice each day, but he failed his lifting goal, he was not able to get up the two extra cleans.”  This accountability one on one during the week builds chemistry. Team rules are for the team

I do not know if there is anything that destroys team chemistry more than coaches who do not apply the team rules to the team.  When the starting quarterback gets preferential treatment, how do you think this makes the third string quarterback feel?  Team chemistry, the Adams getting along with the Adams, will dissolve when they are treated unfairly.  If Joe, the fourth string linebacker, has to do up downs for being late to practice on Tuesday, and Bill, the starting linebacker is late on Thursday, and gets a pass, then there is a problem.  Team rules need to be applied evenly and appropriately.