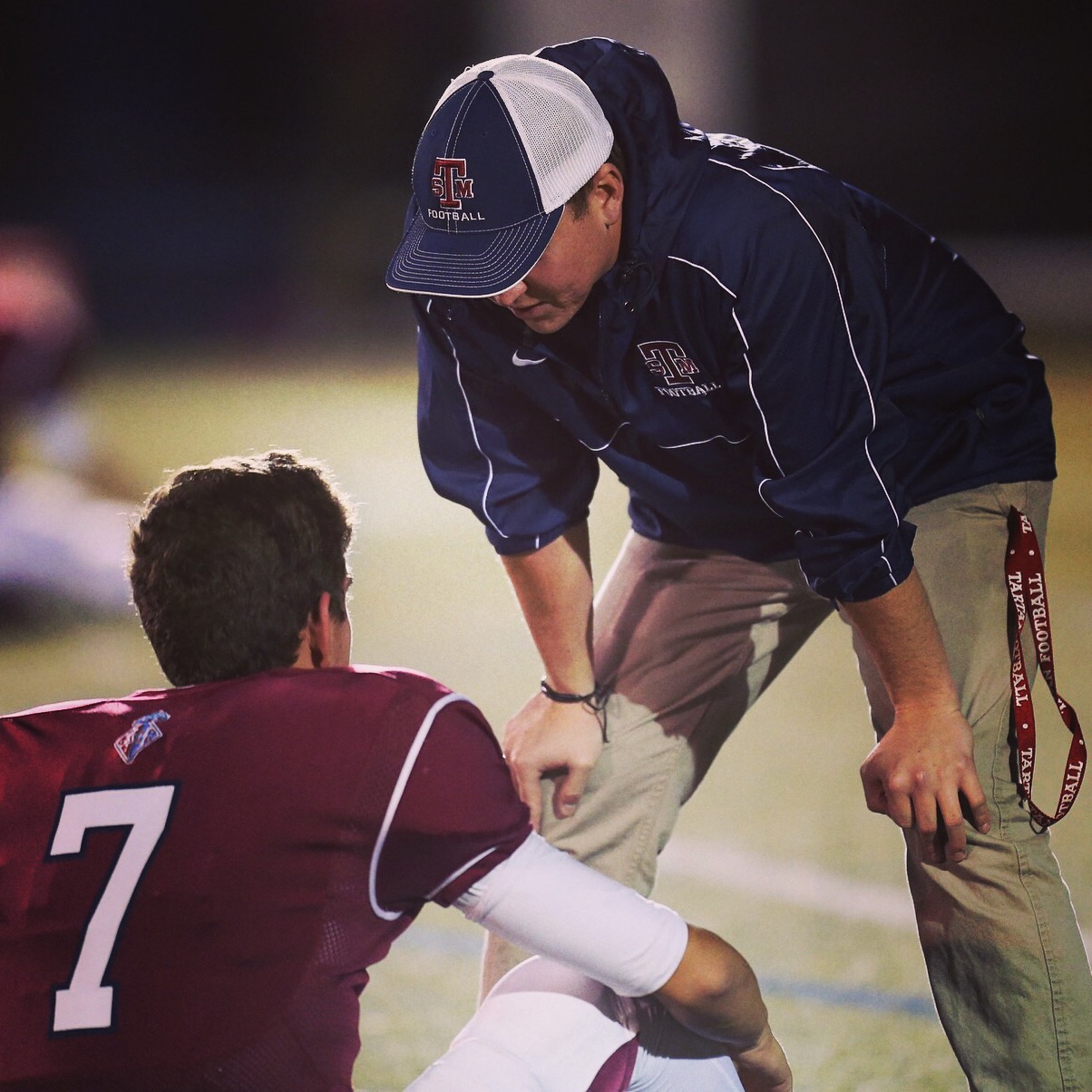 When I was a brand new Head Football Coach in the Fall of 2003, I met a family by the name of Fahrion.  Dave and Wendy (pictured below) are the proud parents of Robby; then he was a brand new freshman to our program.  Although his son was on the JV team, Mr. Fahrion wanted to introduce himself to me.  And I learned something from him that I now practice with my son’s coaches (my son is just 8, and starting youth sports).  I shake the coach’s hand after every game, win or lose, and say thank you.  Mr. Fahrion modeled that to me for three years, and it was encouraging to have one parent thank me no matter the outcome of the game.  The Fahrions are some of the best parents I’ve partnered with over the years; always supportive and have taught their sons well.

As I watched Robby that year as our JV quarterback, I saw in him, almost right away, something that I haven’t seen in many freshman through 14 years of coaching: leadership that his peers respected and a knowledge for the game unmatched by his peers.

Robby is now Robb, no longer a young buck player, but now a coaching peer.  He is the current Assistant Varsity Head Coach/Offensive Coordinator as well as the Head JV Coach for the St. Margaret’s Episcopal School in San Juan Capistrano, CA.  He has been coaching for eight seasons. During his career, he has been a part of two CIF Championships, one CIF South Bowl Championship, seven league championships and many deep runs into the postseason.  Always fun AND humbling to see a former player go on to have a much better win/loss record and more championships than you right?!  Follow him on twitter here.

St. Margarets had a phenomenal season, going 15-0 before playing for a California State Championship this year in their division.  I asked Coach Fahrion to document the week, as I thought it would be a great way for aspiring Offensive Coordinators to see how an OC prepares for a game, a very important State Championship game.

I’ll run this in parts over the next few days.  Here is Part 1 of Under The Headset: Preparing For A State Championship Game.

It is the day of the game and, due to prior commitments for work, I find myself leaving for the Dallas-Fort Worth Airport to catch a 7:55 AM flight back to Orange County. As I am driving to the airport, my mind is racing with things I still need to do before tonight’s game. I arrive at the airport in plenty of time before my flight and begin my game day preparations. I finalize my play card, create our special teams depth chart, offense/defense depth chart and our play log. For me, being organized is so important and it helps me to relax and know that I have everything I need before the game. I touchdown in Orange County a little bit early and find some time to make some phone calls to colleagues that know about Christian of El Cajon. It is important at this time of year to look for help from others outside of your own coaching staff. I have no problem asking other coaches I trust to take a look at our opponent and give me their thoughts and opinions on the team we are facing.

I arrive at the school and hop on the bus. At this point I am extremely tired, but know there is more work to be done. I jump on my laptop and watch some film with my offensive assistant, Coach Steffien, and we strategize for the game that night. We believe we are up against the wall, but we think we can catch them off guard if we execute early and put them in a hole.

The stadium is beautiful and the weather is perfect for a mid-December football game. There is some rain in the forecast, but we are hoping it holds off knowing that we want to throw the ball around the yard a little bit tonight. We set up the field, prepare the headsets and then wait for pregame to begin.

Pregame begins and I can tell that our opponent, Christian High School in El Cajon, is looking right through us. All year, they have been touted as a sure thing to come out of the south in Division IV. Our boys are calm, cool and collected. We never tend to worry about the other team, but I could tell these guys were ripe for the picking. I challenged our WR’s telling them, “They are looking right through you guys. They think they have four better athletes than you and are going to try to man you up. You know what to do.” After all, we were 20 point underdogs. The kids are back in the locker room and I am out on the sideline with a few of the other coaches. As crazy as this sounds, I try and relax my mind before the game by talking about something other than football. For the next three hours, we will be focusing every effort towards the game and I truly believe that coaches can fall into the “paralysis-by-analysis” category. I have a plan, but I know more often than not, that plan is will change and I have to be relaxed in order to quickly and decisively adjust. Performing as an offensive coordinator and calling plays is all about feel and flow, and being tense and uptight does not allow you to call plays in this manner.

STAY TUNED TO SEE HOW THINGS TURN OUT FOR COACH FAHRION AND THE TARTANS!