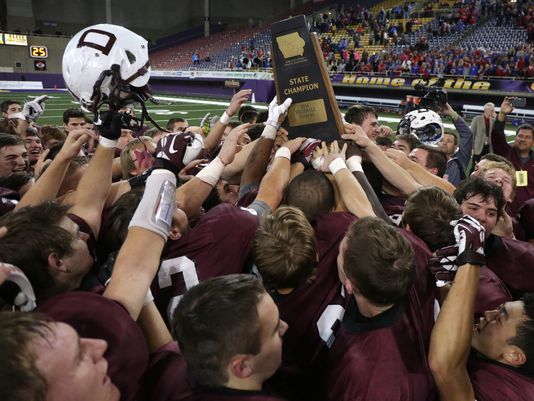 A big thanks to Coach Wilson for taking his time to share some insights about their successful season, and program!

I am not certain what other programs do.  I feel good about our consistent work ethic, emphasis on multi-sport athletes, and an accountability system that keeps our kids on track with their goals and ours as a program.

Stay the course but don’t be afraid to make adjustments with time.  As a head coach, I lost the first three state championship games I coached in.  Since 2010, we have won three championships.  Sometimes people do not respect how difficult it is to achieve.

Punt Return-time and time again it gave us field position.  We also returned 4 for scores.  Two of those coming in the state quarterfinals.

Any program that sustains success over time has character development.  May not be a canned program but you teach character.  We are starting to emphasize 3 Dimensional Coaching to all of our sports.  We also have a leadership class within the curriculum of our school.  However, character is taught every day.

Distractions-typical teen things.  Drugs, alcohol, etc.  I would say a close second is unrealistic expectations.  Everyone wants what is best for their son but not everyone can be a D1 athlete.

There are several.  However, Don Erusha, long time OL coach at Northern Iowa and Wartburg coached with me at my last job for 8 years.  He had as much impact on me as a coach as anyone.  Bob Bozied, a clinician for BFS, has also had a huge impact on my career.