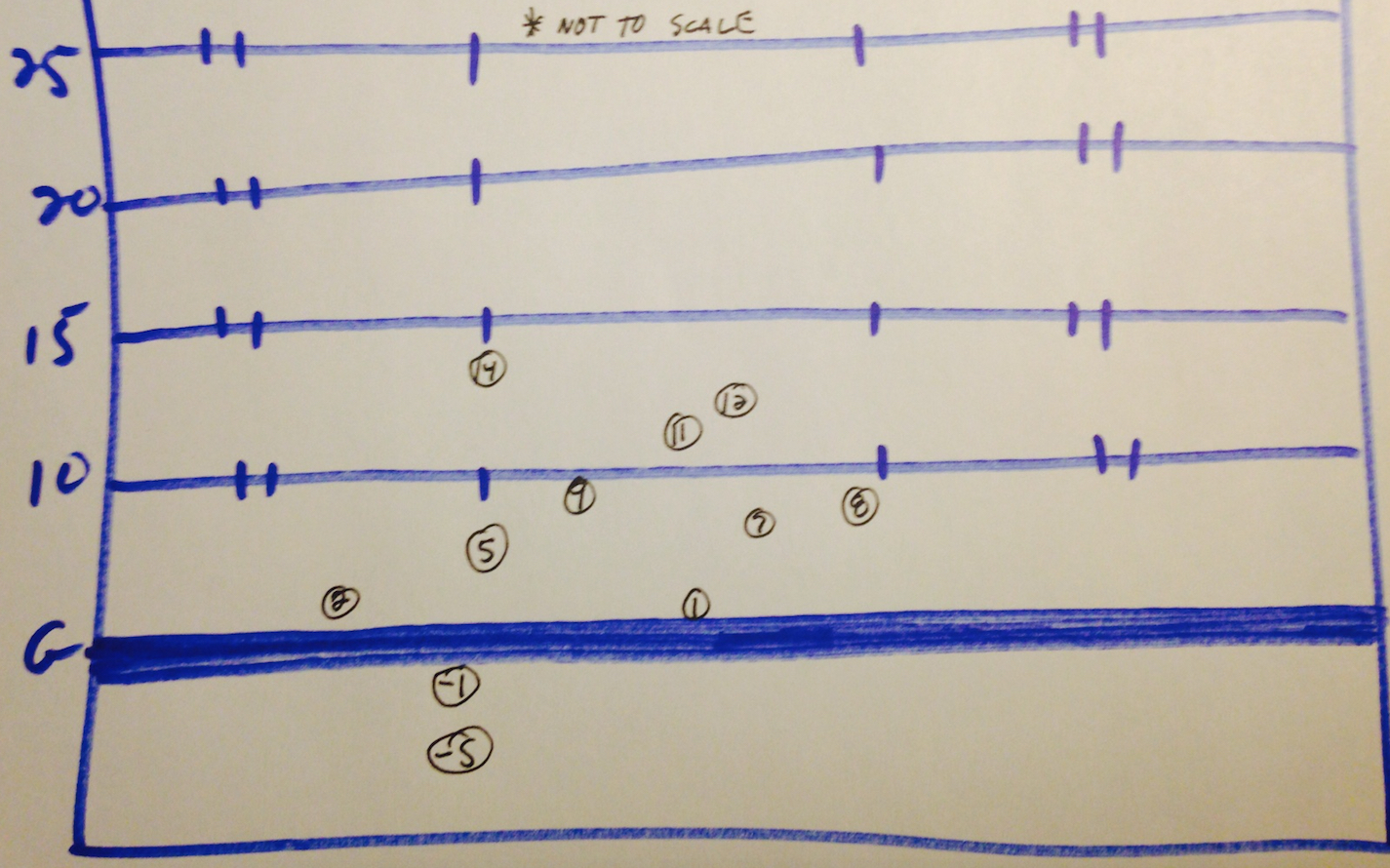 As a Special Teams Coordinator I can always determine very quickly how much time, effort and preparation another team puts in to their Special Teams by the Kick Return team, and their Punt Return.  We recently played a team whose kicker never kicked it past the 18 yard line on Kickoff.  But their opponent the week before us had their returners on the 5 yard line.  I was amused by that, and started licking my chops a bit.  There was no way they were putting time in to Special Teams film prep.

Why would you put your returners on the 5 yard line if the opponent had never kicked it past the 18?

That makes zero sense.  AND, that tells me that they just didn’t do their homework on that kicker.

One way to get your returners in the right spot is by creating what I call a “land chart.”

A land chart show you where the kicker has kicked the ball.  I will document EVERY single kick that I can get my eyes on for that year.  If we are playing a team in week 7, I hope to get at least 4-5 tapes, if not all of them.  If we are playing week 1, I will look back to the previous year if the kicker is a returner.

This land chart will help you to determine where to put your kick returners!  I have given this idea to numerous coaches over the years as I have helped them improve their Special Teams, and I get some interesting responses.  “I’ve never even thought of that.”  Or, “man, that makes a lot of sense.”  I’ve been doing a land chart like this since 2002 when I first took over as a Special Teams Coordinator; a job I’ve held since 2002 at 4 different schools.  Even as the Head Football Coach for eight years, I served as the Special Teams Coordinator! Here is how to figure out where to put your returner: add up all of the yards, and then divide by the number of kicks (finding an average).

So, in this case we would put the returners on the 5 yard line.   And notice WHERE the balls have landed: a majority to return’s left hand side.  Does it make sense in this case to put a returner on each hash?  Or would you be better suited to to middle of the field with one, and left hash with the other?

There might be other ways to do this, but this is what I have found to be the best way.  It works for me.  And we usually do a pretty good job of getting our kids in the right spots.  We do a land chart for every punt as well.  Again, how many times have you seen punts SAIL over a kids head, or a kid NOT be able to field a punt because they are TOO far back.  Finding the average dramatically helps your kids on punt return too!