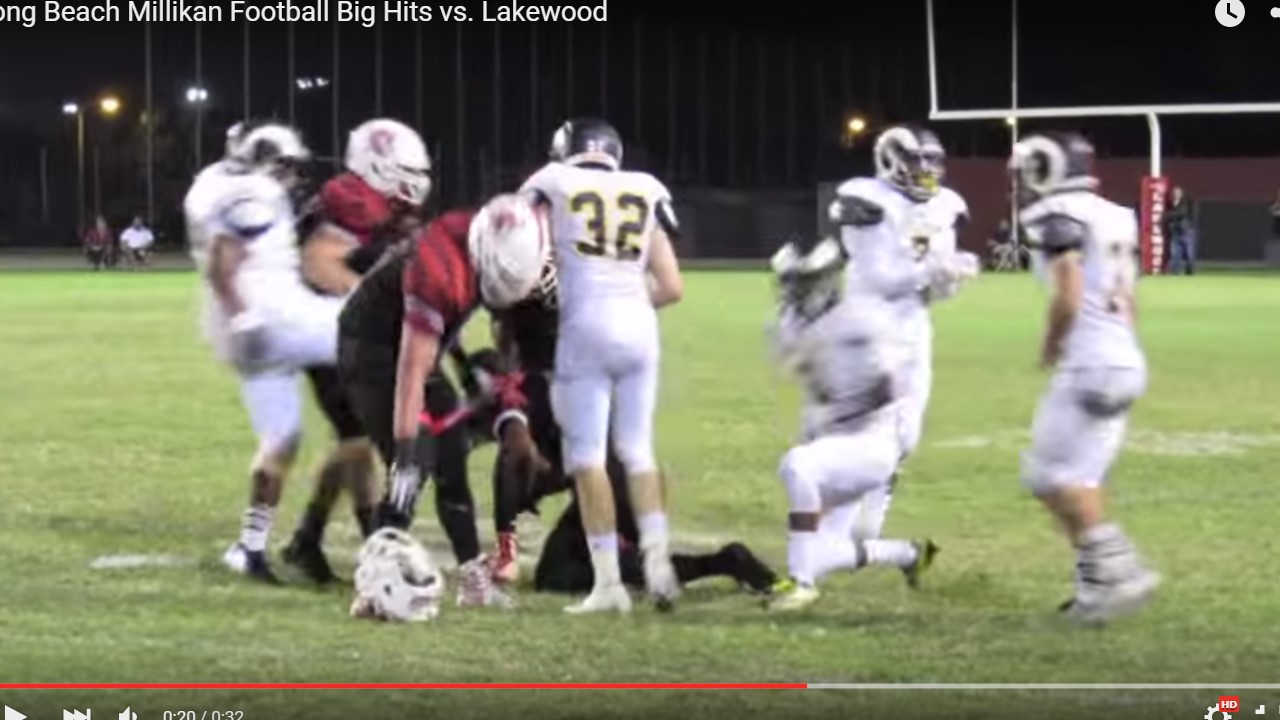 It’s been a pretty weird year for football.  And by weird I mean a bit ridiculous.  I’m not sure if social media has made unnecessary roughness penalties more prevalent for us all to see or what the deal is.

We had the official taken out by two players near San Antonio.  Then a few weeks later, another official was pushed by a player.

And now this.  From right here in So Cal.  One of THE MOST blatant unsportsmanlike fouls I’ve seen in 15 years of coaching this game.  And there was NO FLAG!

A player from Long Beach Millikan kicks Victor Bates, a player from Lakewood, black jersey #11.  (Bates has a verbal offer from Oregon State, and is the backbone of Lakewood’s offense.)

The kid KICKS a helmet-less player who is getting up from the play.

NO FLAG was thrown on this play.  I don’t understand how that happened.  I’ve seen the whole play.  There is one official jogging RIGHT to the play, he is within about 6 yards of the incident.  How did he not see this?

AND, there is another official even closer to the running back on the ground.  How did two grown men miss this?  I know it’s a tough job, but you’ve got a kid on the ground without his helmet on.  Your job is to protect that kid.

And there is a kid who gets to the pile AFTER the whistle has blown, who KICKS the helmet-less kid, and NO FLAG?!

There is no place for this type of behavior in the game of football, period!

We’ve got to do what we can as coaches, as leaders of young men, to let our student-athletes know that this kind of ridiculous thing is NOT a part of this great sport.  I hope that these coaches have used this as a tool to teach their football team some integrity.

I hope that the head coach, athletic director and principal do the right thing here, and suspend this young man from the team. For how long?  I don’t know.  That depends on his track record, that depends on his attitude.  But at least a few games.  He needs to learn. Coaches, we’ve got to HELP this game by cleaning up stuff like this.  There is NO place for this type of stuff in the game of football.

Here’s another angle of the kick.  Even more clear than the Hudl film.