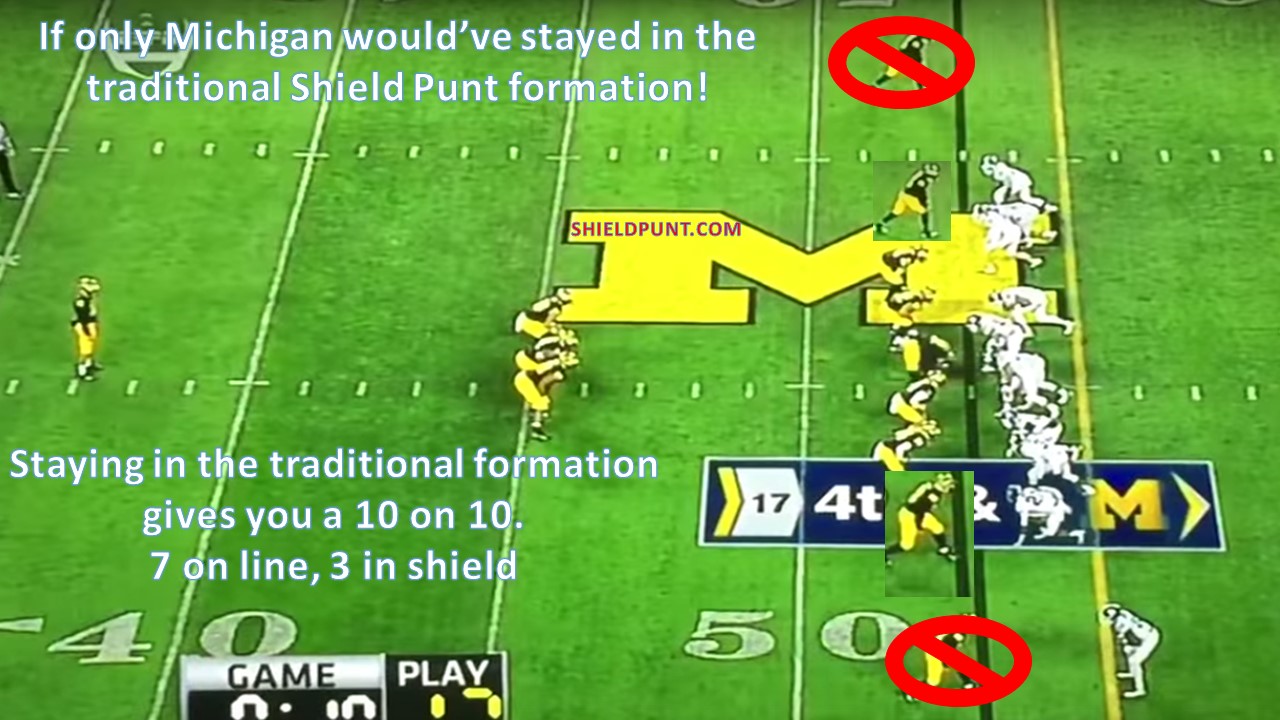 I’m not sure why college Special Teams Coordinators are jacking up the Shield Punt!!  For the last 2 or 3 years, I’ve been seeing more and more of them change around the traditional Shield Punt formation; 7 linemen about 1 yard apart, and then 3 guys in the shield.  Many times, it has been spreading out the end guys on the line, as Michigan did tonight.

This messes up EVERYTHING.

The whole way the Shield Punt was designed is to funnel the players INSIDE.  Usually, if teams are bringing 10 guys, there are just 4 unblocked.  And usually, it’s very difficult to fit two guys through one gap.  But if they do squeeze, you’ve got 4 defenders on the Shield, and they can usually handle it.

My stats using the Shield Punt (not counting 2015):

If fact, I stole the idea from an article I read called “The Shield Punt: Dare To Be Different.”  I loved the concept!  I started ShieldPunt.com a few years ago after having so many guys nationwide, at both the high school and college level reach out to me for consulting their programs with the Shield Punt.  I’ve spoken on this topic at the Glazier Clinics a few times, and will be back doing a Shield Punt talk in February 2016 at the Los Angeles Glazier. I really can’t think of one reason to spread out L3 and R3.  I suppose the ONLY reason might be to contain the returner.  I’ve had just ONE TD returned against the Shield Punt since 2002.  It’s not very difficult to keep contain with your L3 and R3.

In fact, this gunner on the bottom is probably only about 4 yards wider than he would be if in the traditional Shield Punt formation, one yard from R2.  What good does this do?

Here is what the formation would look like in the traditional Shield Punt. If in the traditional Shield Punt, here are what the blocking responsibilities would have looked like. The traditional Shield Punt teaches you to take a step to your right if you’re on the right hand, and to the left if you’re on the left hand side; AWAY from the football.  You are blocking THROUGH the man, you’re not staying at the LOS to block them.

As you can see above, with the traditional way to “block” the Shield Punt, it would’ve left just 3 men unblocked.  And those three men would all be taken care of by the Shield.  That’s how basic this is.

But no.  That’s not how it went down.  Look at these FIVE totally unblocked men. (3 up top, 2 on the bottom) 3.  Punter’s Reaction To A Low Snap

First things first!  I’ve NEVER sat back there as a punter, with the game on the line, and 10 guys fighting for their lives to kill me.  Never.  So, it’s very easy for me to sit here from my couch, and point fingers at the punter.  That’s the goal here.  The simple goal is to learn, for coaches and players to learn, so they don’t make the same mistakes!

I teach my punters that they have ONE shot to pick it up; be an athlete, and make a play.  BUT, if you don’t pick it up with that ONE try, you’ve got to FALL on the ball.  Just simply secure the football, period.

I also teach my kickers NOT to ever try to kick the ball if you’re back is to the defense, only if you have control of the ball, and are facing the D. Or, you can by my Shield Punt Manual here.

What Coaches Are Saying About ShieldPunt.com

“The Shield punt clinic is a must have for any team using it. The depth of information alongside the film cut ups has helped our staff to evaluate our shield punt and make the necessary changes to improve it. This e Clinic will help you organize your punt team even if you don’t use the shield punt as well.”

“This e Clinic not only went over the scheme, but gave the drills and skills needed to implement the Shield Punt. As a coach, that’s what I’m really looking for- not the X and O but the install plan for it. Coach Fore was able to give me a plan for improving one of the most neglected parts of football (Special Teams) and in my opinion the most important part of Special Teams, the punt.”

“The Shield Punt E-Clinic was fantastic. It provided very detailed information on the very popular and successful Shield Punt. It contained plenty of videos to support the written information. It was easy to follow and very useful. I would recommend to any coach.  Coach Fore could easily charge far more of the information that is provided. Well Worth it!”