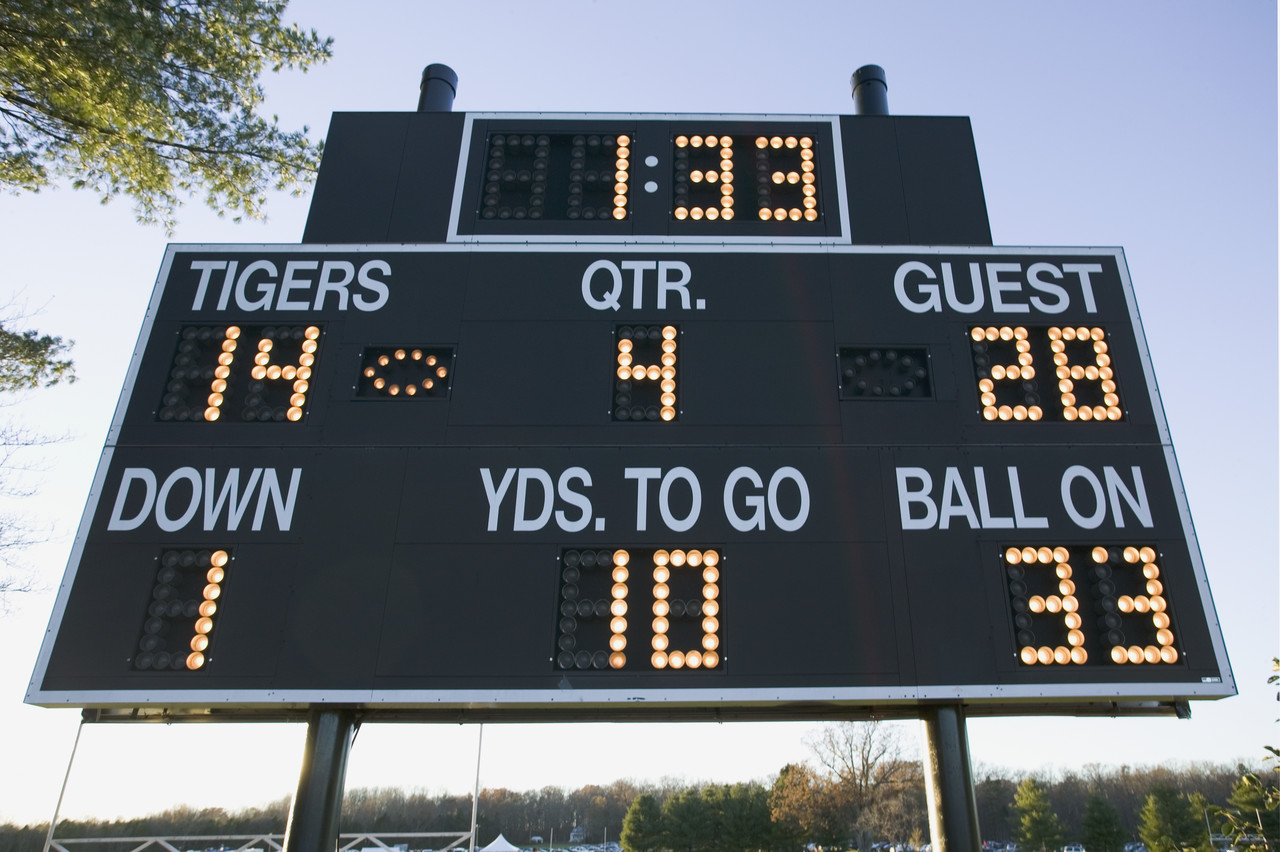 Gone are the days when we let bad things happen to our kids.

Bad grade? Must be the teacher’s fault.

Your kid’s not the starter? The coach must have something against him.

Your team lost? That’s ok – everyone gets a trophy.

I’m a high school wrestling coach, but I started off as a middle school wrestler and I lost… a lot. And let me tell you, there are few things more humbling (or more humiliating as a 13-year-old) than losing a wrestling match.
My first match ever, it was just me out there, on the mat, on my own, a scrawny 90-pounder in a singlet that didn’t fit properly, getting thrown around like a rag doll in front of my parents, my coaches and all my friends (and the girl I had a crush on at the time!).

I’d love to tell you that this amazing thing happened after that. That my parents made me go back that next day. That I went through a five-minute “Rocky” training montage scene and suddenly everything clicked leading up to an inevitable state championship.

That didn’t happen though. The beatings continued and it wasn’t easy.

For better or for worse, I’m a very competitive person – always have been and probably always will be. I’m one of those people they talk about that hates losing more than he likes winning. I can’t even play ping-pong with my wife without catching myself getting annoyed if I lose. She’s really good. Losing just never sits well.

I’ve always been this way, so you can imagine how much frustration and angst my newfound wrestling career was causing me. Left with no choice, I trudged on.

Over time, I started to get a little better. By the end of that first season I managed to eke out a win or two.

Because of good parenting, good coaching and good mentoring I decided to stick with it the next year, and my wrestling career continued from there. I never got past my hatred of losing and I never won a state title, but I did slowly, but surely, get better and better.

Like the reality that is most of life, my competitive career seemed to follow the pattern of two steps forward and one step back. What I realize now is that the continual process of trying, failing, getting back up, learning and trying again is the recipe to success in almost any endeavor.

I was fortunate enough to have people in my life that forced me down that path of realization. That was 25 years ago and what I see a lot as a coach today scares me. There are way too many people looking to make things easy for kids today, to knock down their obstacles and clear their paths, to allow excuses and to direct blame to others.

As I see it, one of the best and most important things I can do for my student-athletes as a coach is to purposefully create an environment of failure with an atmosphere of support. The benefits last a lifetime.

So let’s break it down. What are the benefits of putting our kids in situations where they’ll fail?

For any coach or parent Mindset by Carol Dweck should be required reading. Dweck talks about a fixed mindset and a growth mindset. Kids with a fixed mindset believe their basic abilities and talents are fixed traits that remain constant over a lifetime. Growth mindset athletes understand that their talents and abilities can be developed through effort, good teaching and persistence. The development of a growth mindset is so important for kids to continue improving. When you’re put in a difficult situation where you’re continually unsuccessful, and then see improvements over time, it forces those with a fixed mindset to buy into the fact that they can always get better with effort. Once an athlete accepts this growth mindset, they can apply it to all aspects of their development and the improvement usually accelerates from there.

Self-Worth Based on Effort

When an athlete buys into this growth mindset, through repeated exposure to failure or adversity and eventual improvement, the second mindset shift that starts to happen is a total re-evaluation of how they define themselves as successful. For all kids, the default metric of success is wins and losses. When those losses happen, the initial feeling is inevitably “I’m no good at this.” Allowing a kid to quit here is a huge disservice. As a kid is encouraged to stick with it, progress eventually takes hold and leads to incremental improvements in the results. Through some positive mentorship and re-framing here, kids will shift their definition of self-worth or success to one based on the effort they put into making themselves better, not whether or not they win any particular game. This shift towards focusing on “process” over “outcome” is transformational in creating kids that can weather any storm and apply this thinking to all aspects of their lives. This mindset shift is what ultimately leads to grit. According to Angela Duckworth, “Grit is the tendency to sustain interest in and effort toward very long-term goals.” She should know – she wrote the book on it. (Incidentally, Grit by Angela Duckworth is a second book I would strongly recommend for all coaches and parents). Grit is the number one thing we, as parents, coaches and educators, need to instill in kids to counteract today’s trend of quitting when something is hard and too easily jumping from one activity to the next when we meet with adversity. Developing a growth mindset and re-framing our view of success to one defined by effort is what ultimately leads to this grit. And grit is what gives kids the resilience and character they need to survive, thrive and grow in challenging situations. If you’re not seeing the connections here to success in life outside of sports, open your eyes!

It doesn’t stop there though. Meeting with failure and difficulty helps develop our children in other important ways as well.

They say “if at first you don’t succeed, try, try again.” That’s great, but they also say “the definition of insanity is doing the same thing over and over again and expecting different results.”

So how do these two seemingly opposite ideas exist together in the realm of building strong kids?

Well, if something’s not working, we’re not going to give up or quit. We’re going to figure out new solutions and new ways to attack the problem. Failure doesn’t just breed resilience but encourages critical thinking and creativity – skills that will clearly benefit kids for life!

As much as some people tout perfectionism in a positive manner, the reality is perfectionism is usually more of an obstacle than an advantage. Too often kids (and adults) get caught up in trying to do things perfectly both in their planning and their execution. Perfectionism can be a costly mistake when this preoccupation prevents forward progress. How many people do you know that spend a ton of time “thinking about” doing something instead of actually doing it?

The ability to suffer setbacks and defeats and to keep moving forward is the single best cure to this “analysis paralysis.” By learning that mistakes are an integral part of the growth process, we can raise kids who have an action bias and make things happen to improve their situation, without getting stuck trying to be perfect.

I think we all can agree that being grounded in reality and having an accurate view of your strengths and weaknesses is an asset no matter where you are in life or what you’re striving to accomplish. Confronting adversity and dealing with losses forces you to keep your feet firmly planted on the earth and maintain this practical view of yourself that enables you to keep moving forward and make good strategic decisions.

Loss, defeat, failure, adversity – it doesn’t matter what you want to call it, the bottom line is that these are formative experiences for all of us. We remember the tough experiences and we remember the lessons we learned from them. The more significant the failure, the more indelibly the memory is imprinted upon us. The silver-lining here is that we never “just” remember the defeat, but it forces us to always recall the lessons we learned and how we grew and improved in its aftermath. There’s no better teacher than our own shortcomings!

Wouldn’t it be great if I realized all this as a 13-year-old kid?

Let’s get real, though. That will never happen.

I was lucky enough to have parents and coaches who held me to a high standard and forced me to stay the course. They realized:

Losses and failures, combined with positive guidance, coaching and mentorship are required ingredients in the recipe of success. [Click to tweet]

I was never a State Champion wrestler in high school but I am an adult who is proud of the challenges and defeats I’ve overcome in my life and thankful I had adults when I was younger that were smart enough to put me in situations where I’d fail and wise enough to make me take responsibility and work through it.

As coaches we can forge these same qualities in our athletes and create young adults who are strong, resilient and prepared to conquer whatever challenges life throws their way. And isn’t that what it’s all about?

So as a coach, I know many of you can take this to heart, but where the real rubber meets the road is in the details. Unfortunately, the knowledge is only half the battle. The real question that remains is:

What can you do to create this type of environment for your team?

Well, coach, it all starts with you! Want to create tougher kids? Check out our top 3 strategies for creating an environment of growth through failure.

Pete Jacobson created WinSmarter to help coaches with the biggest frustrations we all sometimes struggle with: things like dealing with difficult parents, motivating your players, recruiting more kids into your program, fundraising, increasing participation in off-season activities and much more. Get started right now with our Top 3 Strategies for Creating an Environment of Growth Through Failure.