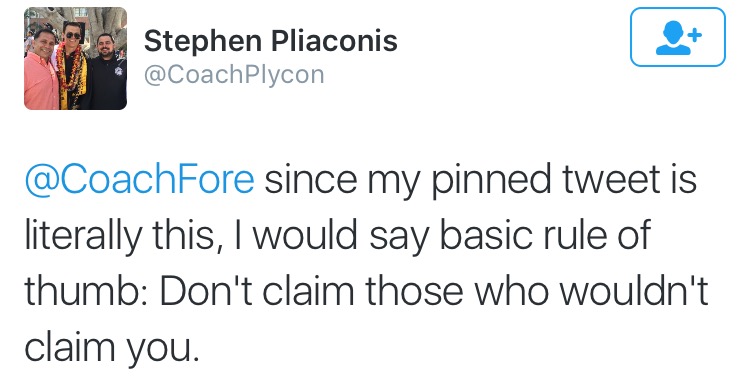 This article is probably long overdue!

Have you noticed that, over the course of the last two years, a whole rash of “trainers,” “recruiters,” and “gurus” have popped up all over the Nation.

You know the guy!  He calls himself “Mr. Recruit” or “I Get Recruits” or “Recruiting Hero.”  Something like that.  Recruit or recruiting is almost always in the handle or website title.

And then there is the “club coach.”  Baseball and basketball have known them for a long time.  Football has been introduced to them the last 2-3 years.  Guys who have either coached a few years of high school ball, or never coached high school ball.  Most noticed there was zero money in it, and they aren’t educators/teachers, so they quit coaching, and started their own thing.  Then they bag on local high school coach.

Both “club coach and “recruiting guru” tell everyone that they can get kids in the town recruited, NOT the high school coach.

This type of guy asks “How many kids they send out lately?”

Yeah, they haven’t sent anyone lately because it is a 1 in 10,000 chance of landing a D1 scholly.  At most schools in the Nation, to earn a college scholarship, you’ve got to be THE BEST player who has ever gone through that program.

But at this certain school where the “guru” is offering scholarships like gum, the best player that ever went through the school was that dude who sells the real estate in town now; he graduated back in ’82.  Nobody since has been able to touch what he did. He was an athletic FREAK!

Tonight on twitter, I saw something I haven’t seen yet. I was a little surprised, but I guess shouldn’t have been.

This dude in California who trains 5-8th grade students (at least that’s all I saw on his twitter feed pictures) had up pictures that highlighted kids in So Cal, and other states.  A coach in Texas asked me if I knew the guy.  I didn’t.  You see, he had his company’s logo on the picture of this kid, a kid in Texas.  And it said that he was a “XYZ Recruiting Athlete.” So, when you saw this picture, it makes it look like that kid went to his school of hard knocks.  Because it SAID it: “XYZ Athlete.”

Only trouble was, the kid was in TEXAS.  And had never heard of the dude.

Are you really “claiming” a kid in Texas?  And then Florida?  Are you doing this to make yourself look good to the parents of that 4th grade kid who has dreams of a scholarship?  Or are you really just “celebrating the kid.”

The coach in Texas simply asked where he got the picture.  What the affiliation was.  The trainer said that he was just “shouting out players from all over.”  Then why put your logo on him?

“We don’t say we train them.  So mind your damn business.”

Interesting.  Then the guy changed his twitter handle TWO times in 10 minutes, and set his account to private.  Why is that?  Was he embarrassed for being called out?  Did he have a guilty conscious?

I saw a recruiting “guru” say recently that he has gotten an average of 65 kids per year, over the course of the last four years, D1 scholarships.   I wonder if he even realizes how absurd that sounds?  How bloated those numbers are.  Why does he feel the need to tout that?  I’ve had people send me DMs that he has sent out.  One said “you need to thank me publicly, shout me out, or I’ll take this scholly away.”

Same guy also reached out to a coach about how “he could blow up my kid online, make him known,” after the kid already had about a dozen scholarship offers.  So, is that how he has sent 65 per year to college?  He leaches on to kids who have already been offered?  Then takes credit for them?

So, while dialouging with some coaches, I thought we could start this new rule for these dudes.  Let’s put some parameters on this.

Lives 90 miles away, played in one tournament with you.

You don’t even know his name, you just call him “Playa.”

Whose GPA you don’t know.

You fly in for one tournament, 2 games (Bryce Harper!).

You don’t charge to play on your club team, cause you want to advertise he plays for you.

Classic one there.  Never met the kid before his offers, but now you can claim he’s yours cause he worked out at your gym after he already signed or committed?!

This is REAL folks!  A “coach”from a National recruiting website telling a kid he has a scholly for him, IF he sends money in a way that it can’t be followed at all, via Western Union.

“Oh, you can’t afford that, okay then, go get TWO athletes who pay me $200 each, and I’ll hook you up.”  I’m not making this up.  I have screen shots from this recruiting “organization.”

Yeah, he came to 3 hours at your camp; bet you REALLY made THE difference.

These two tweets say a lot.  I really like them.

And finally, the best thing I saw on this topic tonight!! AND SO, SO REAL!!

This sums it all up for me: And if this post offends YOU, then you are probably guilty of over-claiming kids!