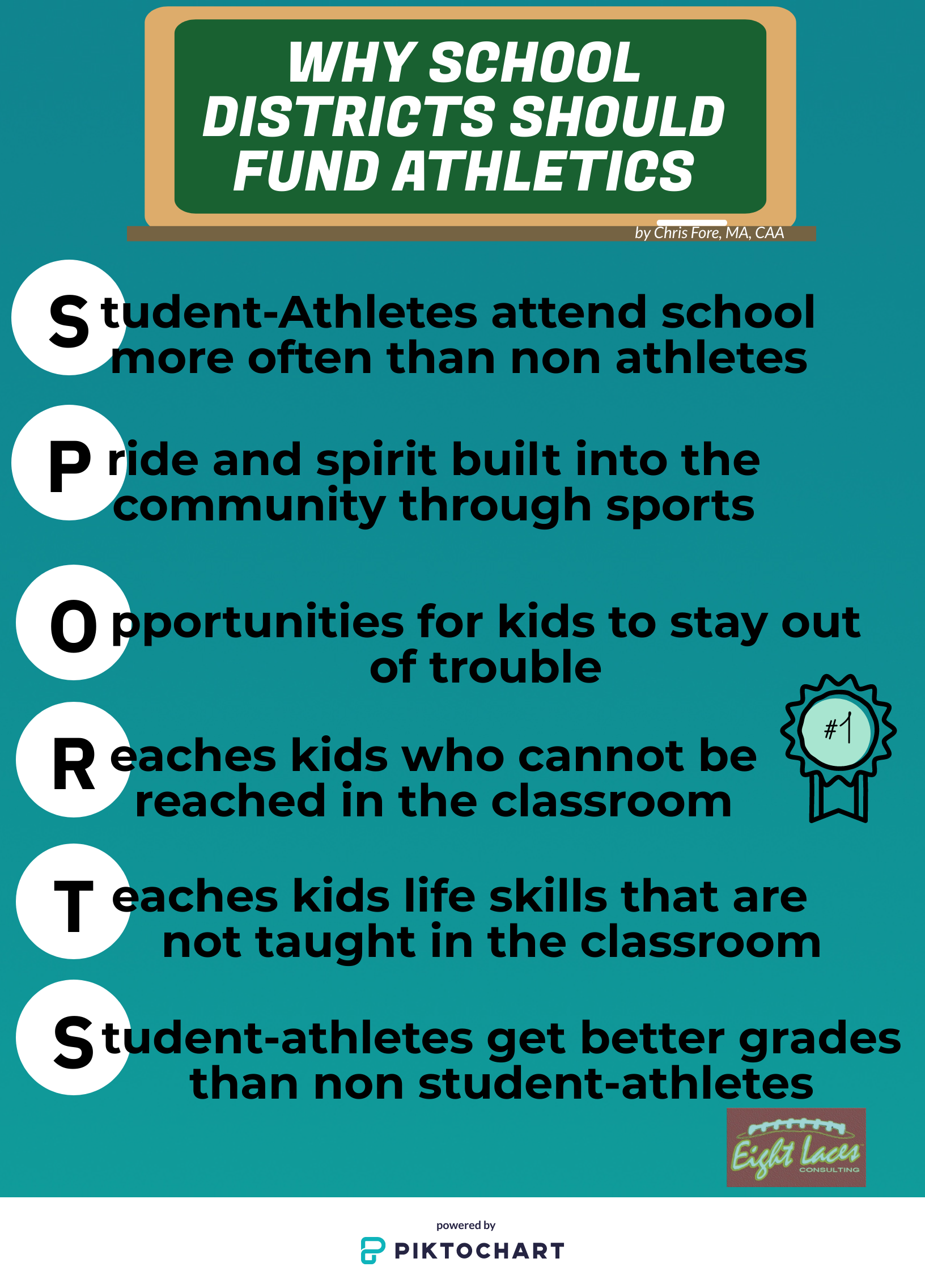 There is a lot of talk surrounding budgets in education right now.  Many districts are going to have to make deep cuts.

Usually the “extra-curriculars” end up on the chopping faster than any other aspects of education.  District administrators need to take significant time to really evaluate the effects of their cuts at this time.  It is easy for a district administrator who hasn’t been on a campus in 15 years, 20 years to delete a line item on a piece of paper without really thinking about what that cut will mean to the community, the students and the school. There are many, many reasons that school districts need to keep sports funded.

Student-athletes have an enhanced sense of belonging to the school: Involvement in a moderate number of activity domains, among academic/leadership groups, arts activities, clubs, and sports, promotes a greater sense of belonging at school, increased academic engagement, and higher academic performance as measured by grade point average according to a study of urban, ethnically diverse students (40.7% Latino; 16.8% African-American, 12.7% Asian-American, 11.2% Caucasian, and 18.5% other ethnicity or two or more ethnic groups). The study authors suggest that it is necessary for schools “retain ample extracurricular opportunities in order to foster adolescents’ sense of belonging at school and higher academic performance.” They conclude that, “it is essential that schools offer a number of extracurricular activities that capture the diverse interests of the entire student body. Schools can maximize the impact of these activities by encouraging disconnected, low achieving students to join a couple of activities. At a time when school budgets face reductions, this type of research argues for the importance of maintaining a breadth of extracurricular opportunities for students attending urban high schools.” (Knifsend & Graham, 2012).

One study, at Vista Murrieta High School by former Athletic Director Ray Moore, demonstrated that student-athletes attended school on an average of four days more than their non athletic peers.  They had 1,249 student-athletes that year.  That is 4,996 days!!  At about $60 per day per student, this equals $299,760 of revenue!

One major consideration for districts is what happens when they cut sports?  Will Johnny and Sally transfer to a school that does have sports?  What kind of ADA will be lost then?

Pride and spirit built into the community through sports

Let’s face it: thousands of people don’t come to cheer on students for their math test or science lab.  They do for the football game on Friday night.  Sports inherently bring people together.  The old timers sit around in the coffee shops on Saturday morning beaming with pride about last night’s win!  This is something that athletics provides communities, and another important reasons that districts need to continue to fund these opportunities. Opportunities for kids to stay out of trouble

Without sports, many children will find themselves in trouble out of pure boredom and a lack of direction.  Playing sports gives students the opportunity to spend their time doing something productive instead of getting into something that will take them down a negative path.

Reaches kids who cannot be reached in the classroom

Some kids do not like school!  (Probably not a shocker.) Teaches kids life skills that are not taught in the classroom

Sports teaches students things that you just cannot teach in the math or science curriculum.  Teamwork, work ethic, handling criticism, time management, pushing yourself physically and mentally, being accountable to others, and so much  more.

There are many developmental, psychological, emotional and social benefits that students garner from playing sports that they simply cannot get in the classroom.

Researchers have been able to demonstrate, for many years, at both the high school and college levels that student-athletes perform much better in the classroom than their non athletic peers.  Multiple studies can be found below.

A STUDY IN THE GRADE POINT AVERAGE OF ATHLETES VS. NON‐ATHLETES

Student-Athletes vs. Athlete-Students: The academic success, campus involvement, and future goals of Division I student athletes who were university bound compared to those who would not have attended a university had they not been an athlete.