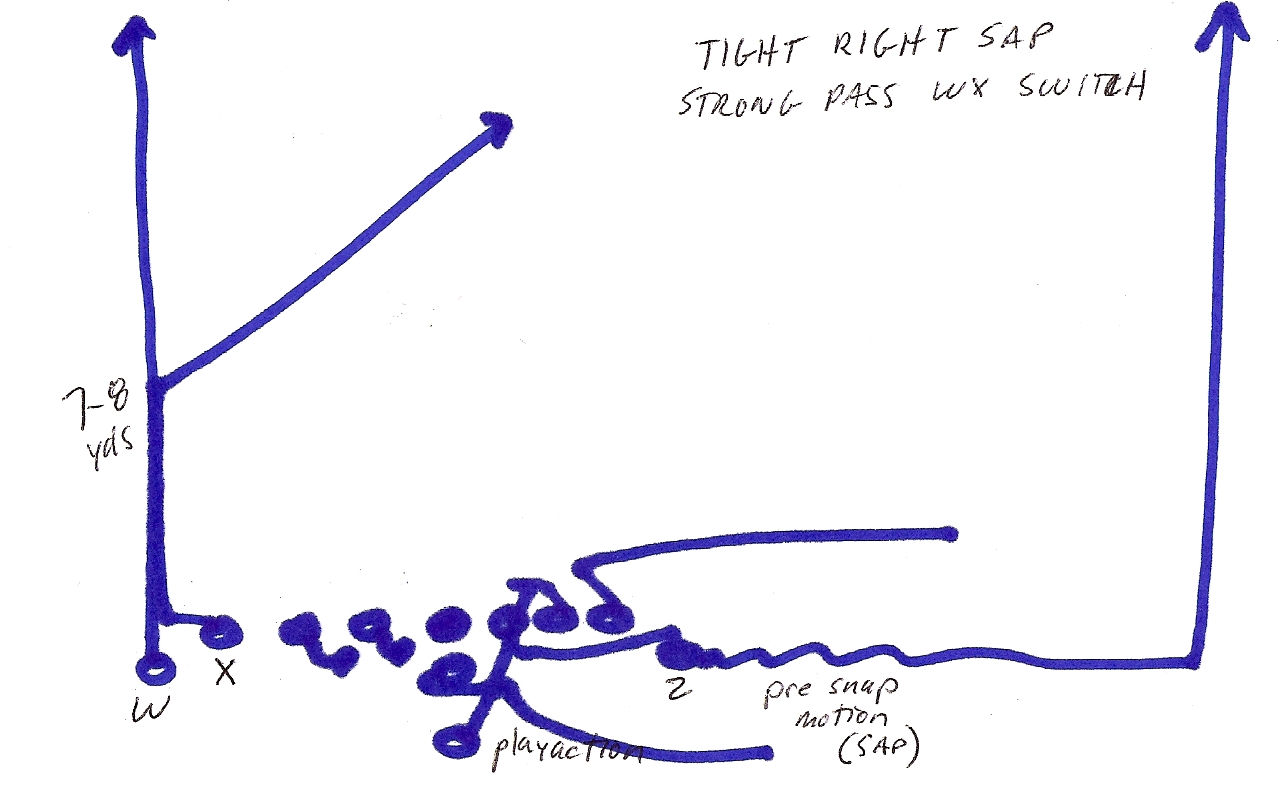 My absolute favorite passing play out of the Wing T offense that I’ve ran for a long time is definitely Tight Right Strong Pass WX Switch!

Sometimes the best plays come when you don’t really mean for them to come.  Another way to put it is that some of the best plays happen with slight game time adjustments that are made because of what the defense is doing.  Maybe it’s your personnel.  Sometimes you draw something up and you think it will be a really great play, but the whiteboard doesn’t translates to the field, and you have to scrap what you just dreamed up.  Sometimes you draw something up that you think will work, and it becomes a core part of your playbook for years to come.

Tight Right Strong Pass WX Switch happened with a game time adjustment, and a personnel decision.  It has become my favorite go to play for long yards ever since we put it in during a playoff game in 2005. Our “tight” formation usually sees a 8 in the box, sometimes 9.  I love to throw out of it, especially after dominating with the run out of it.   On this particular night, we saw a Cover 2 shell, which we don’t get much.  When we put our Z in motion, we noticed a linebacker and the Strong Safety going with his motion.  The other Safety stayed on his hash, and we noticed the middle of the field was vacated.

Get the ball to the post!  The kid with the best hands on our team played the X wide receiver, and he usually ran the post on this Strong Pass Play.  Since teams knew that, they did a pretty good job of “walling him off” from that pattern.  So, what we did was “switch” his pattern with the W back.  That is why the “switch” word is in this play.  Usually in Strong Pass, the X runs a post, and the W is in motion behind the QB, carrying out the option.  When we keep him in the play with “dead motion,” he will run what we call a “jet,” your basic streak pattern.  Switching their patterns on this play has the W running the post, and the X running the jet.

This play works really well versus both a Cover 2 or 3, but it works better against the Cover 2 shell.  Against the Cover 2, we are looking at the W over the middle of the field; against a Cover 3, we are looking at the X.  With the presnap motion versus the Cover 3, that Safety will usually roll a little because he is undisciplined.  We put vertical pressure on him right away with that motion, and with the pattern of the Z.

W – He is going to basically be running almost right behind the X at the snap of the ball.  At about 7 or 8 yards, he is going to make his cut to the post on his left foot.  I say about 7 or 8 yards, because we want him to be patient and watch the safeties.  If they are in a Cover 2, he wants to wait for the Weak Safety to bail out on the X pattern.  As soon as he turns his hips to follow the X pattern, the W needs to make his cut to the middle of the field.  That is why this play works so well.  Putting the vertical pressure on the safeties is key!  Against the Cover 3, he is watching that Safety; usually the Safety will bail on the first threat, which is the X pattern.  Again, as soon as the Safety turns his hips to go with that X, W cuts to the post.  If the Safety is disciplined, and sits in the middle of the field like he should, W needs to cut at 8 yards at the latest on his post route, try to get underneath the Safety to occupy him, so that the X will be open.

Y – The play action on this pass is key as well.  We are running our base play to the fullback, so the Y is blocking down to the linebacker, then pivoting and running an out pattern at about 5-7 yards, to the flats.

Z – Goes in motion presnap and runs what we call a “Jet,” which is a streak, or what others call a 9.  Straight up the sidelines as hard as he can.

Versus Cover 2 –  After, the play action fake to the fullback, and on your roll out, the progression for the quarterback is this:

***  9 times out of 10 versus the Cover 2, we are throwing the post pattern underneath the Weak Safety, to the W.

Versus Cover 3 – After, the play action fake to the fullback, and on your roll out, the progression for the quarterback is this:

This is my favorite passing play!  Maybe you see why now?!  I love the vertical pressure that this play puts on the safeties, especially after we have been running the ball down their throats!  You have these safeties coming up so hard, sometimes coming up as close as 8 yards at the snap.  Then they have these three deep patterns to cover all of a sudden after the play action.

I love this play especially down inside the red zone.  I love it on 2nd and short as well.  Big homerun with Tight Right Strong Pass WX Switch!