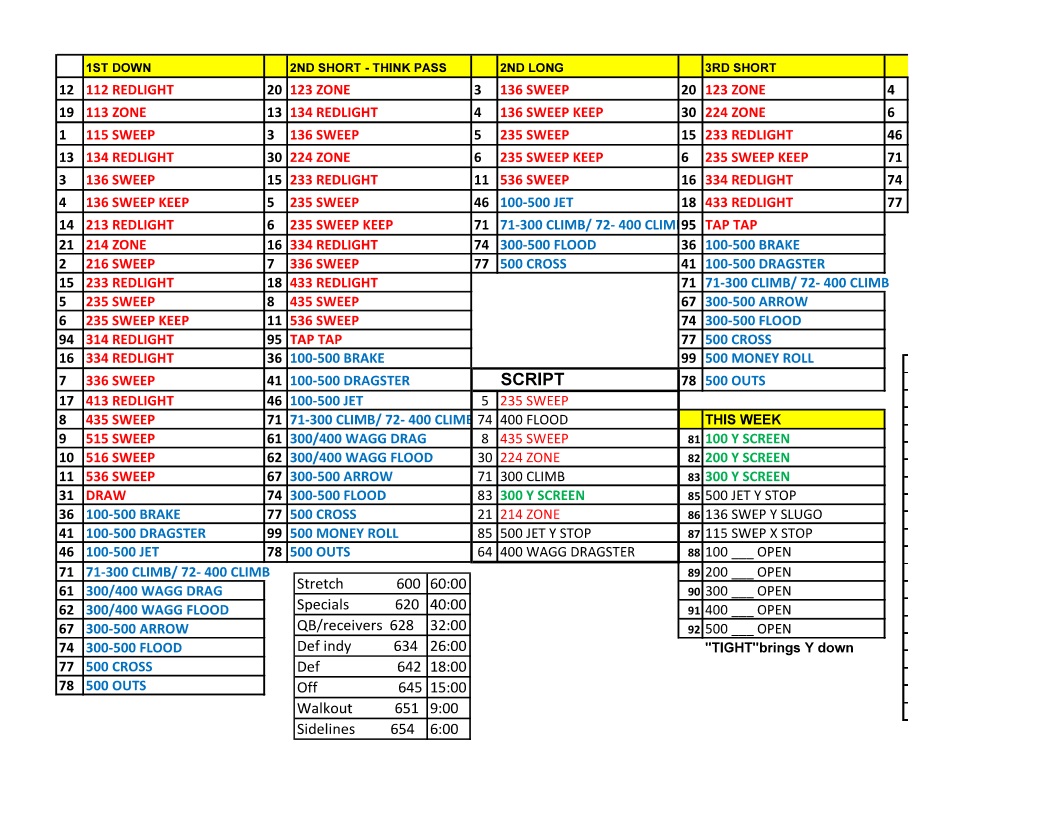 I get at least an email a week, many more than that once we get to the summer, asking for a sample of my Game Day Play Sheet; therefore, I thought I would put it up here.

Play Sheets, Play Call Sheets, Game Day Card, whatever you call them are so personal.  You have GOT to find what works for you.  When I first became a Head Coach, I just kept using what my mentor had passed down to me.  It took one game for me to say “This doesn’t work for me.”  And then it took about 3 years for me to REALLY like what I was using.  I went through a few different formats those first three years.  I probably used 6-7 different kinds.

There are many, many, many ways to format these Game Day Play Sheets.  This is just one sample.  Again, find out what works for YOU!

I use four 8.5 x 11 sheets.  They go back to back so that I end up laminating two sheets back to back twice.  Is that confusing to you?!  It is to me now that I read it!  Hopefully you will get the idea when you see the pictures below.  I love putting these things together because it means that it is GAMEDAY!

I put one together for my final walk thru practice on Thursday, but usually end up writing on it a bunch, sometimes making last minute personnel changes, etc.  So, I always make these for my coaching staff on Friday mornings, usually about 9 am.  I make them myself.  Tried to pass it off to a student intern football player once, he jacked it up.  Tried having a secretary do them once, she jacked it up.  Like many of you, I’m just one of those guys that has GOT to have some things PERFECT!  My play card is one of them.

This article will feature the FRONT SIDE of my Play Sheet Card.  I will do the back side later.

The front side has: my offense (I’ve been the OC 7 of 8 years as HC), our script for the week (first 10-12 plays), pregame schedule, the wristband card that the kids are wearing, officials names, time out counter, ideas for that specific week, special/trick plays, captains numbers.

I’m sorry that these pictures are blurry.  Once you click on them, they aren’t blurry.  And here on my end they are not blurry.  Not sure why they are showing up blurry to you. Obviously, this is going to be the largest section.  Again, it took me several years to find out what I REALLY liked as far as formatting the offense.  I settled with this.  Now, this playsheet is just about the ENTIRE playbook.  I will NOT have this many plays on it for every game.  I just wanted to show what this thing looks like during Training Camp.

I settled on using the “by down/distance” method for this section.  Obviously, the coaching staff thinks long and hard about which plays go where.  What is your go to 3rd and Long run play – BAM!  Now, some guys have all this in their head and don’t use a playcard: props to you coaches who do that.  I’ve been learning over the years to keep it more simple.  I know that I could coach a game without this card, but to be very honest, I would feel so naked without it!!  It’s habit now.  I just like to stay very organized, and this helps me to do it.

The red plays are RUN, the blue are PASS.  This helps to quickly identify those.  We have just about EVERY single play on our wristband.  So, you’ll see a number next to every play on the play card.  This is so that we can go in to our no huddle stuff at any time with any of our offense, something that I’ve been doing since way before “tempo was cool!”  I have been running my “strike/freeze” no huddle blend since 2003, my first year as an HC.

Obviously, very important to have your script on your play card!  Trust me!  When I first started using a script, in 2005 I think it was, I didn’t put my script on the play sheet!  Moron!  So, we go to run the first play, and I said “Let’s go through the script guys, let’s go.”  They knew the first three plays, NONE of us remembered play four!  What a waste of time.  I put the script on there from then on obviously!

I always hated as an assistant not really knowing how much time I had, what the pregame schedule was outside of it being up on the board in the locker room before the game.  I think that it is imperative to have this pregame schedule on your card so that everyone is on the same page.  All of my coaches get a play card, even the defensive ones because of the special teams stuff on the back.

Our This Week Section is just what it sounds like: plays we just put in THIS week, OR plays we really like THIS week.  This is just an area to remind our offensive staff to come back to these plays we thought would be great this week.

Another tough lesson learned when I first started using wristbands my first year as a Head Coach!!!  (I’ll blame it on my age of 27!)  I had a wristband on most of the week during practice to use for calling plays, and practicing our no huddle!  But I never put that wristband on my play card, and I forgot my wristband in the classroom.  The next game, I wore the wristband, but then would be looking at both my play card and wrist band.  By the third game, I just put the wristband info right on the play card, a no brainer!

You’ll see at the top right hand side that I have a W and a S.  You will see the name PETE next to the W.  This means that Pete was the white hat.  S is for S meaning the guy I’m going to be talking to the most, right on my sideline.  I used to write their names on my card, but then forgot to one night, and then just put this W and S on from then on so that I wouldn’t forget to write their names down upon meeting them.

These are our trick/special plays that we have practiced that week, and feel good about.

You will see on the very far top right corner my Timeout Section.  This helps me to keep track of timeouts.  How annoying is it to keep saying “How many timeouts lefts? ”  Or “How many timeouts do they have?”  No reason not to know exactly.  Having this chart will help.

We  can all spew off the numbers of our captains pretty easily.  I just like having them written here for the meeting with the officials.  They always want to know who the captains are.  I usually change out 1 captain every week, an honorary captain.  This helps me  to just list the 4 guys without having to try to remember them, especially early in the season.