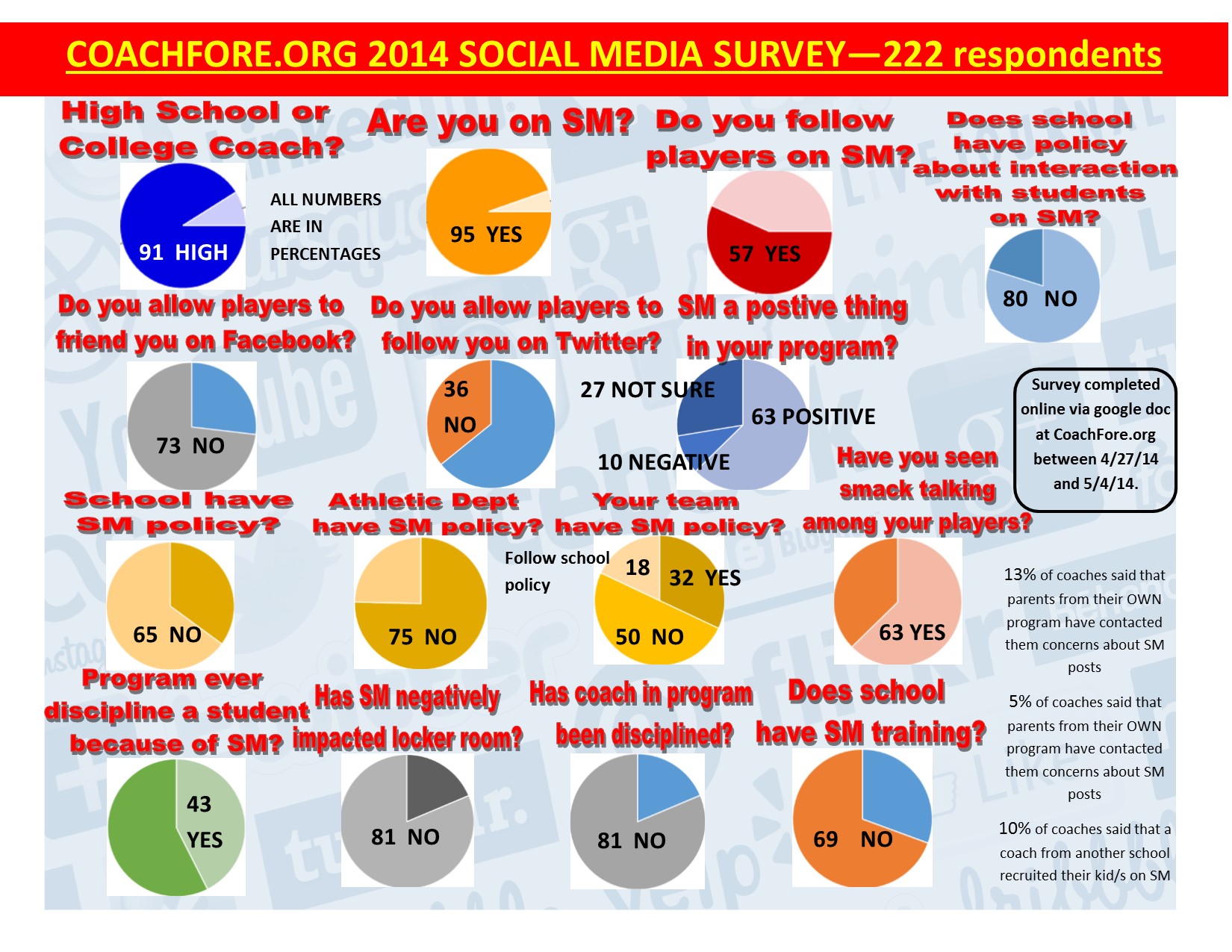 Thank you to the 222 coaches who took time out of your schedules to answer my Social Media Survey!  I really, really appreciate it!

I’m very excited to have had so many coaches take this survey.  I’ve done a lot of surveys.  Most of the time, what you have at 50 matches very close to 100 and to 150 and to 200.  I think that 222 gives us a great look in to Social Media behaviors among coaches, student-athletes and schools nationwide.  Not a very “scientific” survey I suppose.  It was done only online without many “controls” in place.  However, the percentage revealed, I’m quite sure, most likely represent the same numbers if we have 10,000 take this survey.

I’ll be writing about the results, and my observations, etc. over the coming weeks.  But I wanted to get this out as soon as possible to you guys.  I ran this for 8 days at CoachFore.org (April 26-May 4, 2014).

We had 21 college coaches (9%), and 201 high school coaches (91%) fill out this survey. The survey was not able to be taken twice by the same computer.

95% of these coaches say that they are “active” on Social Media.

Only 20% of coaches said that their district/school has a policy about following/not following students on Social Media.  I really, really think this is bad folks.

Along with this one: Only 31% of coaches said that their school offers some type of program to train students about the proper use of Social Media.  I’ll address this issue in an article later this week.  However, school administrators have GOT to get a grasp of their approach to Social Media.  Like many social issues/problems, parents have dropped the ball for the most part.  We need to educate our children about their use of Social Media.  It’s just as important these days as teaching them about sex, drugs/alcohol, how to drive, nutrition, etc.  In fact, in some cases, I would argue that it’s MORE important to teach our students digital citizenry than these other issues schools have as a regular part of the school coursework.

35% of coaches said that their school/district has a Social Media policy.  Again, a Social Media policy is one of the first places to start in putting together a total educational package for students.  Campuses are being infiltrated today with carry over, with spill over from Social Media posts.  Just last week in Chicago, a 14 year old girl was shot and killed because of a beef that was carried out on Facebook.  Two teenagers fighting over a boy on Facebook led to one girl dying MUCH too young.

25% of coaches said that their athletic department has a Social Media policy.  (I wrote one last year for the school I was at because I couldn’t find one I was in love with.)

43% of the coaches reported that their athletic program has disciplined a student-athlete because of a Social Media post.  It’s a little puzzling to me that this number is at 43, yet the number of teams using a Social Media policy is very low.  How can you hold kids accountable, and discipline them for something online when you don’t have a policy in place to address it?

63% of coaches reported having seen their athletes talk smack about their own team or an opponent on Social Media.  No surprise here.  This is what leads to a lot of issues on campus, and in games.  This is what led me to really addressing Social Media with our athletes.  Kids talking smack online to each other.  It was so bad that a parent from the other school approached me about it, with tweets printed out from some of our kids.  It was my first year at the school.  I quickly learned we needed a Social Media policy!

10% of coaches said that coaches from another school/s have reached out their student-athletes on Social Media sites with a recruitment effort (not college recruiting).  This is pretty sad.  If you have to resort to online recruiting, you’re program probably isn’t very good!!

13% of coaches said that parents from their own program have approached them with concerns about Social Media posts.  I’m pretty surprised this isn’t a little higher to be honest.

Only 5% of coaches said that parents from other programs have approached them with concerns about Social Media posts from their student-athletes.

19% of coaches said that a coach from their program has been warned or disciplined for their Social Media posts. Notice that this is the same exact percentage of coaches who say that SM has spilled out over in to their locker room, interesting.  As coaches, it’s our job to model digital citizenship.  We must lead the way in this area.