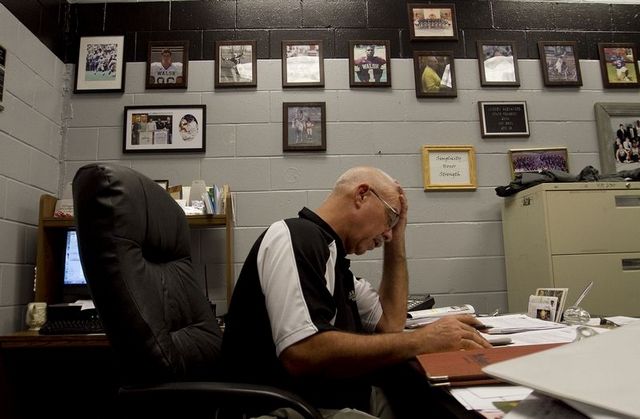 So, they are looking for a new Head Coach, and you’re very excited about the job.

Maybe it is the “dream job” or maybe just a great job to get.  Maybe it is closer to “home” or maybe you just need a change.  No matter the case, you have turned in your resume, your portfolio, the application, and now you wait.

So, you contact the AD to see how things are going, and he never bothers to get back to you.

This is a question I get at least two times per week during the hiring season, sometimes up to one time daily for a week!

Here are the top 3 reasons the Athletic Director isn’t getting back to you.

Athletic Directors are BUSY people.  At many schools they are being pulled in 1,000 different directions.  They are teaching 4 periods a day, maybe coaching a sport, meeting with Booster Clubs, meeting with Administrators, scheduling busses, calling officials, emailing parents, mopping up a mess in the gym, chalking the field, consoling an agitated athlete, negotiating the eligibility of a transfer student, and that’s just a normal TUESDAY MORNING!!

You get the picture though, they are busy people.  And nothing will go on the back burner like a coaching search when it is “open” for a month.  If the job is being flown for a month, meaning that they are accepting applications for a month, everything else in the day will come before returning your phone call.

I’ve been in the Athletic Director “chair” for 6 years here in So Cal.  Forget about scheduling out a day.  Much of your day is moving from “putting out one fire” to “putting out the next.”  So, they just don’t have the luxury of returning your call to confirm they have received your package, or to answer your email about the job itself. You’re NOT his guy.

Hate to say it, hate to be harsh.  BUT, another reason you might not be getting a call back is because you’re not his guy.  I’ve hired about 25 head coaches in just 6 years as an AD.  Just over four per year, which is just over one per season.  So, I’ve basically been searching to fill at least one head coach position most of my career as an AD.

It never stops really, especially in today’s age of the “walk on coach” here in Southern California.  Meaning that there is not a job for the coach “in the building.”

If you’re not getting a call back, or a returned email, it might be because the AD has his sights on someone else, and he is just trying to avoid you.  I’ve been there before.  I’ve had my final four candidates picked out a week before the job closed.  “Here are my top 4.”  And it might change in the last week, but it usually doesn’t.

Most of the applications come in the first half of the job being open.  If you’re on my “top 4 list” and you call, I’m going to keep you engaged, I’m going to call you back.  But if you aren’t on that list, I’m probably not going to just call to chat!  If you’re asking something specific about the interview process that I haven’t outlined in the job flyer, I will probably get back to you, or more than likely, have my secretary get back to you.

What really annoys me during a search is that coach who keeps calling, keeps emailing, 2-3 times a week.  Dude, if I’m not calling you back, stop contacting me!

There is nothing to say

Athletic Directors don’t like to “give updates” on the job search process to anyone but their bosses.  Coaches have called me over the years saying “I am a candidate for your job, and I’m just calling to get an update on the process.”  Usually, to be very honest, there is nothing to say.  I like to be very explicit on my job flyer.  I’m going to outline the process on there so that everyone is on the same page, and so that the candidates know the timeline.  Unfortunately, not everyone rolls like that.

A sample of what I might put on a job flyer:

Between January 1 and February 1, I am not going to have anything to tell you.  So, stop contacting me!  If you haven’t heard anything by February 10th about an interview, then go ahead and give me a call, but I’ve probably already dropped a denial letter in to the mail.

For more wisdom and guidance on your job search process, check out my book AN INSIDER’S GUIDE TO SCORING YOUR NEXT COACHING JOB.