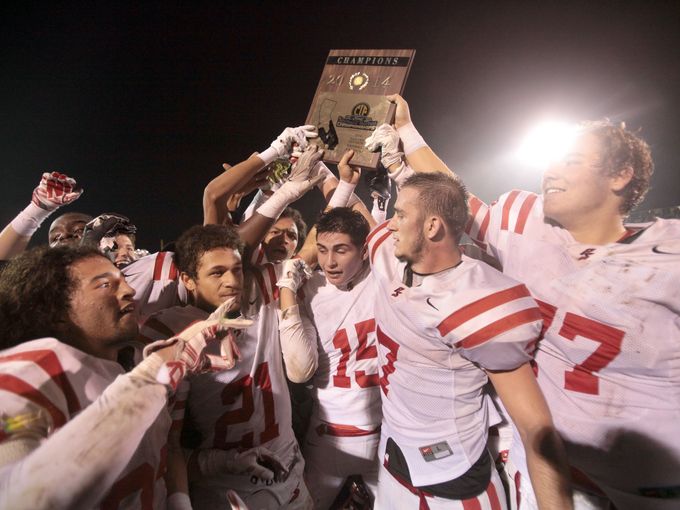 I really like going “Inside The Locker Room And Minds” of very successful football coaches and programs.  I’m starting to do some of this research right now on the programs from the 2014 season.  If you know of a program that won a Championship (either State or Division), and you think they want to discuss these things, please let me know!  Email me at Coach at CoachFore.org.
This profile is from Head Coach Dan Murphy at Palm Springs High School in Southern California. They won the CIF Southern Section (SS) Eastern Division Championship in 2014. Most say it was the most improbable of the 13 division champions in the CIF SS, which is the largest section of California’s ten sections.
Why improbable?  They entered the tournament as the fifth seed, and upset a few teams on their way to a ring.  Full disclosure here: they upset our program (Oak Hills HS) in the Semi Finals; we were ranked #2.  Then they went on the road and upset #3 to win it all.
I was VERY impressed with this football program and their season this year.  Those kids EXPECTED to win that Semi Final game at their place; I saw that first hand.
Congratulations to Palm Springs High School, their coaching staff, their players, and their community on their 2014 CIF-SS Eastern Division Championship.  Here is a look inside the Warrior’s football program.
And a big THANK YOU to Coach Murphy for taking his time to give us a look in to his locker room and mind!!

1.   What does your football program do differently from other programs in your league, conference, state that helped you win a  Championship?

I would say that one thing that we do that other teams in our area don’t is practice at 7:00am and 2:30 pm during double days. In the desert, during August, temperatures can reach 115-120. Every school but ours practices at night (usually 7:00pm) for their second practice. We take precautions such as extra water breaks and rest stations, but I feel that practicing at 2:30“toughens up” our kids, especially emotionally. Our kids take pride in the fact that we are the only team out in the heat and it gives them self-confidence and builds team unity.

2.  What do you consider to be the most important aspect of your championship?

I think the “team-first” mentality that our kids had this season was the key. We were fortunate to have 5-6 offensive weapons that could score. Sometimes that can be a problem because some feel that they aren’t getting enough “touches.”  This year’s squad made a commitment to play hard for one another and play unselfish football. This year’s team realized that team success would translate into individual success (scholarship opportunities). As a result, we had 5 kids sign Letters of Intent this year.

3.  What is one piece of advice that you would give to a coach wanting to win a championship?

Work to get better each practice. Setting a goal of winning a championship is common, but if as a coach you don’t address your weaknesses and work to improve on a daily basis, you’re setting yourself up for disappointment.

We run a spread read option offense. We have went more to a passing team the past few years due to our personnel. Right now we are about a 70/30 pass run team.

We are primarily a 4-4 defense, but will run a 50 front when needed.

We take pride in our special teams and stress to the kids that they are just as important as offense or defense. Our special team that stood out this year was our kickoff team. For the past 4 years we have been fortunate to have 3 very talented soccer players as our kicker. This year’s kicker put the ball in the end zone 75% of the time, and 85% during the playoffs. Making a high school team drive 80 yards to score was a big advantage for us.

I looked into “A Football Journey,” character curriculum. In the end, I couldn’t afford it. Last spring I designed a program that I wanted to run during double days. I was going to have a week-long camp where the players and coaches would stay together 24/7. ( I called it Camp Unity) Between practices we were going to do team-building activities and at night, was going to have various organizations come in and talk to the kids. Topics would range from domestic violence, reaction to peer pressure, drinking and driving, negative effects of social media, etc. I had it approve by my principal and athletic director and parents were on board. Eventually, I wasn’t allowed to do it because of CIF’s 18 hour rule. Instead, I would spend time after Saturday film sessions to address these issues and I believe that the kids were responsive to it as there was a lot of interaction and discussion taking place.

8.  What is the number one obstacle you face in building a Championship caliber football program in your community?

I would say that the major obstacle is fundraising. We are fortunate to have some great resources in our community and we have used them quite often. But because we are a small town, it’s hard to get the same businesses to contribute every year. It takes money to run a successful program. As a coach, I need to develop more strategies to raise money.

9. Who do you consider to be your main mentor in this profession and what about that coach do you try to emulate in your program?

I consider my mentor to be my high school coach. He still comes to our games and gives me advice when I need it. He was a great role-model to me as I was growing up. He was a disciplinarian, but cared about the kids that he coached. I try to follow in his footsteps and let every kid in my program feel as though I care about them more as a person, than an athlete. I have an open-door policy to my office and the kids come to me on an array of topics or problems. I believe that when a kid knows that you care about them, they will give you everything they’ve got. So far it’s been working pretty well for us.