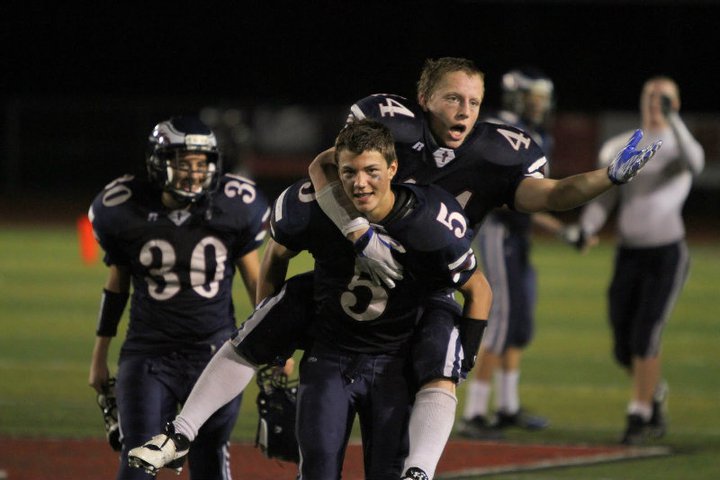 Senior Phil Wilhelm being carried off the field by froshie Sam Sukut, November 2010.

My dad died when I was 9 years old; in a car accident.  On the way home from work.  I missed having a dad growing up.  It wasn’t fun doing many things without a dad by my side.  And I’m sure I missed out on many valuable lessons without a dad to teach them to me.

One of my closest friends died when I was 16; in a car accident.   On the way home from church.  I was in the car.  My left leg was destroyed.  I’m 39 years old, and still walk with a limp and have constant pain daily from that accident in 1992.

That’s why I don’t allow my own children to ride in cars.  They are dangerous.  People get hurt when they ride in cars, lives get destroyed.  Some people get killed.  Like my dad.  Like my great friend Justin.

Therefore, I’m never going to let my own kids ride in a car, or a bus.

It is safer that way.

There certainly are benefits of allowing them to ride in cars.  But there are risks too.  Even though I know 1000s of people who have not been killed, or even been hurt in a car, I just cannot allow my two sons, or daughter, to ride in a car.  Too great of a risk.

A ridiculous argument? A ridiculous point of view?  Maybe.  But hopefully you see my point.

This is exactly what is happening with the great game of football right now.

Both my dad and Justin played high school football.  My dad in the 1970s, and Justin in the 1990s.  In fact, they both played for the Fallbrook Warriors, the one high school in our small, rural San Diego community.

Neither one sustained life threatening injuries playing football, and neither did I.  But my football career was cut short, to just two years.  Because of a car accident that tore apart my leg, broke the femur and tibia, along with crushing the foot.

Justin died the very same day that he got his license.  He had his license for less than 12 hours, and he was dead.  An inexperienced driver, going too fast, at night on a poorly lit street.  We hit a telephone pole, and he was killed instantly.

So sure, when my oldest son Nate turns 16 in a few years, I will definitely be hesitant about letting him drive.  I’m sure that I will not want him to leave in a car by himself at all.  I can just drive him everywhere myself.  But what is that doing for him?

Parents: don’t let the suicides of famous NFL players take the sport of football from your sons.  There is a high, high likelihood that your son will not have any long-lasting effects from playing football.

In fact, there is a much, much higher chance that your son is killed in a car accident.  I do not have any scientific studies to prove this.  I have not crunched any numbers comparing and contrasting death rates of motor vehicles compared to high school football. Pictured above is Chris Garland, just one of the kids I’ve coached who credits football for helping him become a great serviceman for our country.

However, I have coached over 400 high school football players over the course of fourteen seasons.  Not one of those kids died from football, and not one that I know of has any long lasting brain problems.  I am sure that if they did, their high school football coach would know.

Two of those kids have been paralyzed or partially paralyzed from motorcycle accidents.  And dozens have lost parents or family members in car accidents over the course of these fourteen seasons. Out of these 400 student-athletes I’ve coached, none have committed suicide.  But they have all lost someone close to them who did.

I run in to these 400 former high school football players often.  Sometimes in person, and more often online in a variety of social media platforms, or email.

Will your son get hurt?  Probably.

Will he die?  Probably not.

We don’t’ know when we will die.  When I hugged my dad that Tuesday morning, December 17, 1985, I thought I would see him again.  I had no idea he was going to die.  And when Justin and I left church that night on July 8, 1992, we were going to drop off our good friend at her house, then meet others for a late summer night dinner.  I didn’t know he was going to die.

Trust me; I know firsthand how dangerous cars are compared to football.

But it’s worth the risk.

And so is playing football.

Chris Fore is a football coach and special education teacher from Southern California.  He serves as a consultant to football coaches nationwide through this business Eight Laces Consulting.  He is the author of Building Championship Caliber Football Programs, An Insider’s Guide To Scoring Your Next Coaching Job, Outside The Lines Manuals.