I can’t speak as to exactly how others programs do things, but I do feel like our program is unique. We start teaching our base techniques, terminology, plays, etc. in the 7th grade. This helps us tremendously because of the small number of students we have 9-12. We feel that doing this helps a 9th grader be ready to play varsity football if need be. We try to make things as simple for our lineman as possible. We want them to be playing fast and physical all of the time, not thinking about what their assignment is. We will do all of the fancy window dressing stuff with our skill guys.

Also we try to be as loose as possible all of the time. We believe that if we are loose in practice, loose in pre-game warm-ups, etc., we will be loose when the game kicks off. The looser our players are, we have found they play freer and have more fun. Now that isn’t saying we don’t work hard. There is a difference between being loose and goofing off. That line can be very thin. That is why it is pivotal to have great leadership. This year we were blessed with great leaders who policed themselves and the team. Rarely did a coach have to get on to a player for effort this year, and that is very rare and special.

Our cohesiveness, players and coaches alike. The best teams that I have coached have been tight knit groups both on and off the field. You have to have everyone wanting the same thing in order to achieve a goal like a state championship.

Build a great staff. Surround yourself with great coaches that you can trust and count on. Make sure everyone is passionate about the game and what you are trying to accomplish. If you believe it, your players will too. You must also be able to get after each other a bit. Our staff is extremely competitive and I believe our players fed off of that.

We run a spread option attack. 90% of our run plays are options, most of them being triple options. That is our base offense, but we are always willing to change depending on what our opponent gives us.

Our base D is the 30 Stack. This year we were able to run more 4 down looks based on our personnel. Again a lot of that depended on what kind of offense we were facing. Our philosophy is to “play offense on defense” make offenses have to defend what you are going to do to them.

Probably our PAT/FG unit. Our kicker was 107/107 on PATs and 7/8 on FGs. Our deep snapper didn’t have a bad snap all year. Our kicker made a 55 yard FG as time expired in the 1st half of the state title game.

Our school is small and we encourage our players to play other sports so we don’t get as much time with them in the offseason as we would like. In the summer we have what we call Charger Iron, our strength and conditioning camp. It is an 8-week program. Here we get stronger and faster, but more importantly we build character and cohesiveness. It is hard to give up a majority of your summer to wake up at 6am for weights and running. It builds discipline, it defines character, and it develops leaders. This is the backbone of our program.

Similar to the previous question, our Charger Iron program is where our leaders are found. We always let the players vote on captains. They are the ones that will be following these leaders so we believe they should be the ones picking them. We vote after the first week of fall camp. Our captains are more often than not the hardest workers, in our summer program. This is where they gain the respect of their teammates and become leaders.

The main obstacle we face is numbers. In the 11 years I have coached we have only had enough players to have a freshman team once. This year we had 49 players 9-12, last year we only had 36 9-12. We often start freshman and many sophomores on the varsity squad. There are some advantages to the small number as well though. Every player is getting coached every day.

My father, Andy Bogert is my main mentor. I try to always evolve as the sport evolves. I always try to call players not plays. He has won championships throwing the ball and he has won championships running it 60 times a game. Always be willing to change based on personnel. Most importantly that it is always about the players, do whatever you can to make it the best experience possible for them.

Thank you Coach Bogert for participating in the CHAMPIONS LOCKER ROOM Series, and congratulations to your team, State Champs! 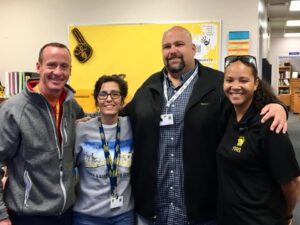