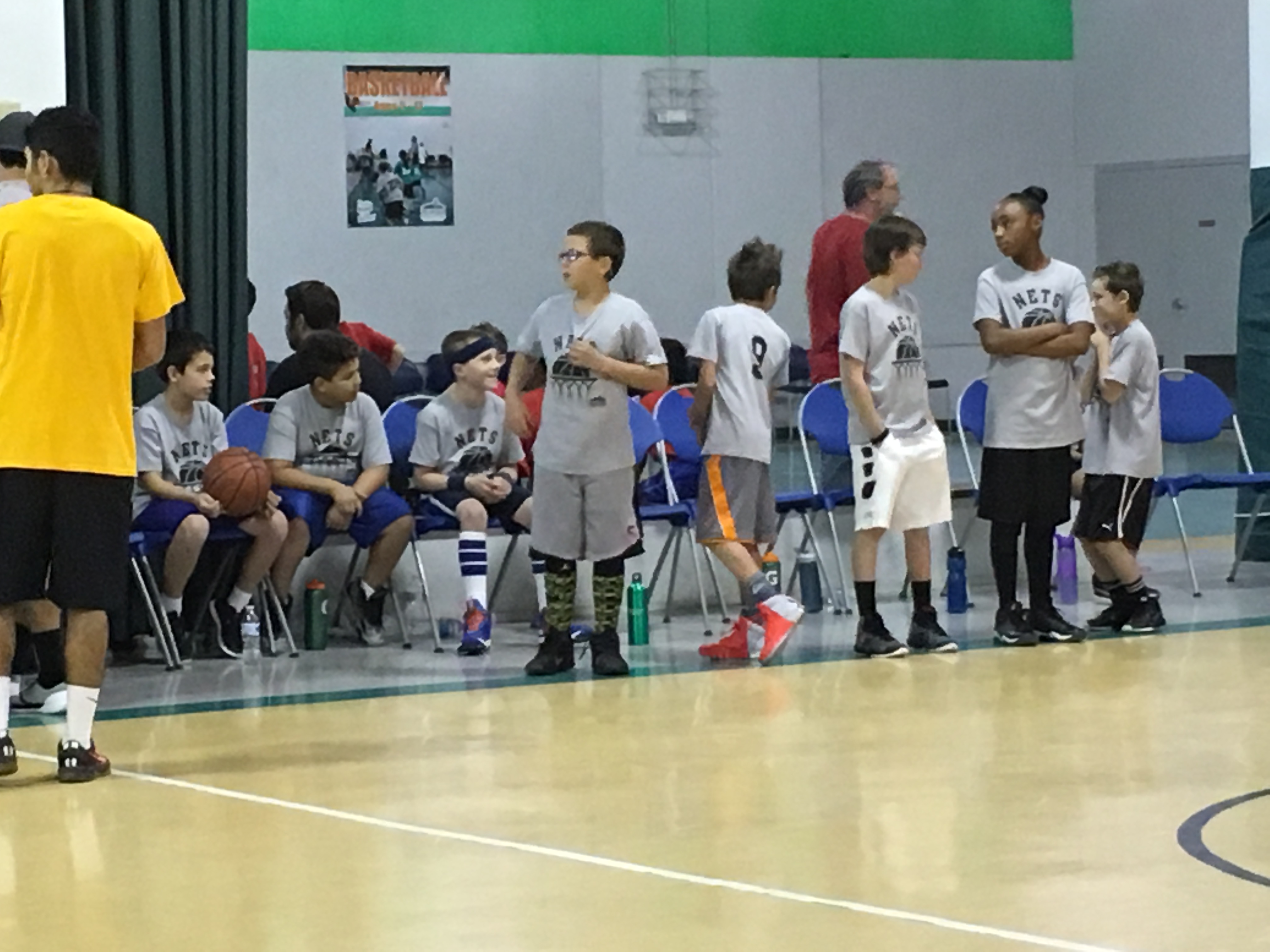 In football this year, he led the team in touchdowns . . . . and tackles.  In baseball, he was the starting short stop, and hit the ball further than anyone in the whole league.   In soccer, nobody on his team scored more goals last Spring.  He’s an athletic kid.

Nate has played 4 seasons of basketball, 1 season of baseball, 1 season of soccer, and 3 seasons of flag football.  And because he’s the biggest kid on the team (every single season, not one teammate has been taller on any of those 9 teams), he’s usually been one of the best kids.

It doesn’t hurt that he was at a high school football game the fifth day he was alive; I was a Head Football Coach at the high school level at the time, 2006.  He’s grown up around the fields and gyms as I’ve been a high school Athletic Director for 6 of his 9 years.

They’ve had two basketball practices this year, today was their first game.  I’ve been to both practices.  I told my wife after the first one, “well this is going to be an interesting season for Nate.  He’s not the best player on the team this year.”  I’ve got a very realistic view of my kid’s talent.  I know that most of his success so far has been because of his size.

The next year, his coach told him to shoot a whole lot more than I thought he should.  I would tell him to pass the ball more, so other kids would have a chance, and he would say “Dad, my coach told me not to, cause the other kids can’t make them like me.”

For the first time ever my son didn’t start today.

Today when I watched the coach sit the whole team down on the bench, and then call out 5 of the 9 and 10 year olds to take the court, my son wasn’t picked.  Nate was one of the three left on the bench.  My heart kind of sunk.  For my kid.

And you know what?

His favorite part: “We won!”

Least favorite: “The one basket I missed.”  (He did score 2 points)

Worst thing: “That the game was over.”

Parents: your kids will be fine if they don’t start!  As long as you’re fine!!!

If you’re teaching your kids all along the way that the TEAM > i, then when he doesn’t start, it won’t be a big deal.

If you’re teaching your kid to shake the coach’s hand, and say thank you after every single practice and game, he will have a healthy respect for his coach; it won’t matter when he doesn’t start.

If you teach your kid that every single person has a role to play on a team, starting at a young age, then it won’t be a big deal when he doesn’t start.

If you teach your kid to “just play hard and have fun,” then it won’t be a big deal when he doesn’t start.

If you use teachable moments while watching the NFL to teach your child that you don’t always get what you want, it won’t be a big deal when he doesn’t start.

I was more proud of my son today then I ever have been.  He was the only one on the bench standing and cheering for his teammates.

And this afternoon, while there was a commercial break during the NFL game, I asked him why he likes to cheer so much for his team when he isn’t in the game.  This little 9 year old looked up at me and said “Dad, I like to treat others the way I want to be treated.”

For the first time my son didn’t start today, and I couldn’t have been more proud! Author Chris Fore is a veteran football coach and athletic director from Southern California.  He has a Masters degree in Athletic Administration, is a Certified Athletic Administrator, and is on the California Coaches Association Board and Itroymanagement.com.  Eight Laces Consulting, his business, provides dynamite resources for coaches.  He is the author of An Insider’s Guide To Scoring Your Next Coaching Job, Building Championship Caliber Football Programs, and the Outside The Lines Manual for Football Coaches.