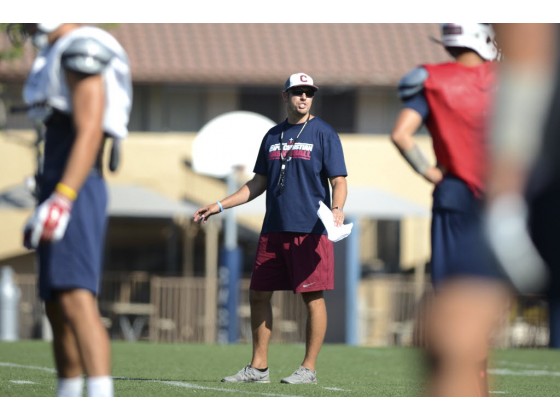 This is a guest blog by Eric Preszler.  Coach Preszler just became the Head Football Coach at Arrowhead Christian Academy in Redlands, California.  This is his second Head Coach gig; he has been the Athletic Director/HFC at Capistrano Valley Christian in San Juan Capistrano, California for the last three years.

I asked him to share his thoughts on the process of leaving one school for another.  Thank you Coach Preszler.  Give him a follow on twitter: @EricPreszler

My interview process lasted just under nine weeks because not only was the school interviewing me, but I was interviewing the school. If this was my first shot at a head job, I would not have known what to ask and I would have probably signed on the dotted line after the first week. Instead, I decided that there were four very specific things I needed. These things may be different for you, but I think you need to decide what the necessities are. How the school answered these concepts is beyond the scope of this post but the following were my requests…

I stressed the importance of upgraded athletic facilities.

I wanted to ensure that I was going to be able to hire on campus coaches.

I emphasized the importance of a stream lined admissions process that would maximize the potential for enrollment.

I needed to make sure I could provide for my family.

A lot of people leave a job rather than take a job, meaning they leave to get out rather than to get in. I was fortunate to be in a situation with great support and stability. However, there were lifestyle needs that I had for my family that opened the door for me to listen to new opportunities. Once I listened, I discovered new possibilities and potential that were very appealing. Every new opportunity has significant challenges but sometimes lessons learned are easier to apply with a change of scenery and new people.

I met with my former team at 9:00 in the morning and my new team at 2:00 in the afternoon. Media outlets began posting the change at 3:37 in the afternoon. I was incredibly grateful that I was able to address my former team and be honest and up front with the kids I had developed very meaningful relationships with before they heard it from someone/someplace else. In order to pull that off, you probably shouldn’t talk with too many people along the way but you better be prepared to meet with those most directly involved (coaches, players, significant supporters) just before the information becomes public. No one wants to hear this through social media, especially people you have worked very closely with during your tenure with a program. That said, I suggest protecting the kids more than anyone else; because ultimately, they are the reason we coach.

The logistics of high school football are different than college or pro sports. Most contracts don’t start until the end of the school year or the beginning of the next school year. Obviously, that’s too late to set your culture and begin building a program. Make sure you answer the questions of when is my last day/first day? How can I make this work financially during the interim? What are some things I can do “behind the scenes” during this transition? What are my priorities as I prepare for this new role?

Make sure you’ve gone through the pros and cons, timeline, and expectations with your family. You may have an emotional excitement about change and new opportunity, but this is flipping everyone else’s life upside down without the same connection and understanding of the circumstances. I’ve always joked that coaching would be much easier as a single, 21 year old, but it would also lose so much of the meaning and purpose without the love and support of your family who rallies behind this crazy lifestyle.

Best of luck… the decisions you make aren’t nearly as important as what you do after you make those decisions.

Eight Laces Consulting helps coaches nationwide with their job search process.  Coach Fore helps coaches with their resume, their cover letter, and their interview preparation.  His book An Insider’s Guide To Score Your Next Coaching Job is available for just $7.99.