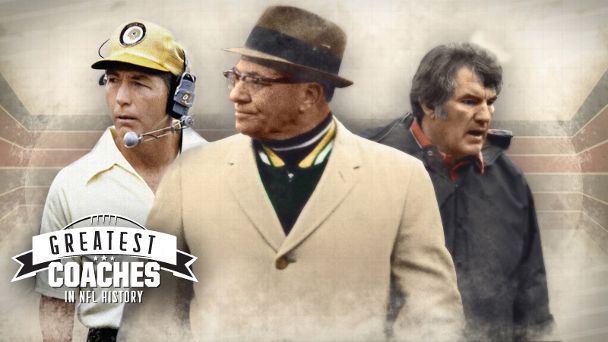 While a football player’s career is short – the average tenure is four seasons in the NFL – a coach’s career can be generational. The great Don Shula coached for no less than 33 seasons – seven at the Baltimore Colts and then 26 in Miami, including the still unmatched perfect season in 1972. When we look around the league today, we can measure greatness by different yardsticks. Mike Tomlin may have never caught the hype of some of his peers, but in 15 years with the Steelers, he’s never had a losing season. Sean McVay’s footprint is all over the current NFL, with Matt LaFleur, Brandon Staley and Zac Taylor among his football staff who’ve gone on to become HC’s themselves. Pete Carroll pioneered the approach of drafting the rookie quarterback and paying premium pieces around him, striking gold with Russell Wilson leading Seattle’s 2014 Super Bowl win.

As with everything sporting, everyone has their favorites. Arguments have raged about who’s the greatest for decades and will continue for centuries. But if we were to have a Mount Rushmore of NFL coaches, these would be the four faces uppermost in the sculptor’s mind.

From 1920-1929, Halas was a player, coach and owner of the Chicago Bears (albeit they were the Staleys for the first two of those years). After taking the American Professional Football Association Championship in 1921, Halas coached the Bears to their first NFL title in 1933. His sixth and final championship came 30 years later, defeating the New York Giants in 1963. Despite only coaching one year in the Super Bowl era (1967), Halas was a pioneer of how we know the game today. He was the first to use film to analyze opponents, and the Bears were the first team to broadcast their games on the radio. Halas had two nicknames: ‘Papa Bear’ and ‘Mr Everything’. In the context of Chicago, and then of the whole sport, both are entirely fitting.

The legendary Green Bay Packers coach bested Halas six times over the 1960s, continuing a fierce rivalry that had lasted 40 years prior and has continued another 50 years since. In saying that, Lombardi made a habit of besting everyone, winning six conference titles and five NFL championships in only nine years as a head coach. A fierce advocate for equality, Lombardi made it known that any establishment which treated players of different races differently in the divided 1960s would be given no business by Green Bay. Cancer took him in 1970, aged only 57. Today, the Super Bowl trophy bears his name; every player, every coach, and every staffer in the NFL aspires to see the words ‘Vince Lombardi’ at the end of a season.

Patriots fans love him. Most other fans hate him. Arguments will rage about how much of his success was down to Tom Brady or to his almost supernatural instinct for knowing when a player’s time with the Patriots was up. One thing that cannot be debated with Belichick is his record. 21 seasons have yielded 17 divisional titles, and six Super Bowl wins. Season 22 may be a little tougher, as second-year quarterback Mac Jones has to contend with a Buffalo Bills team widely quoted as Super Bowl favorites. NBC report Belichick will take his team to Miami five days early for the season opener; Miami have thrown the kitchen sink at a title tilt this year, signing tackle Terron Armstead to protect young QB Tua Tagovailoa and giving him one of the league’s prime targets in receiver Tyreek Hill. Still, the Coral American football odds show New England at a shorter price than one might expect in the face of difficult odds. Few, it seems, are brave enough to bet against Belichick.

Madden’s legacy as a coach is perhaps overshadowed by that of his as a broadcaster – he was awarded 14 Sports Emmys over a 30-year commentating career. And while other coaches may have more titles, Madden’s win ratio of .750 with a record of 103-32-7 over 10 seasons with the Oakland Raiders may never be beaten. His sole Super Bowl came in 1976 with a win over the Minnesota Vikings, having finally triumphed over a Steelers side that had knocked Oakland out of the playoffs in three of the four prior years. Five years after retiring from coaching, in 1984, he had the idea to create an ‘All-Madden Team’ – nominating the players he thought played the game as he liked to see it. It’s a mark of his merit as a coach how proud the players he listed were to be included.