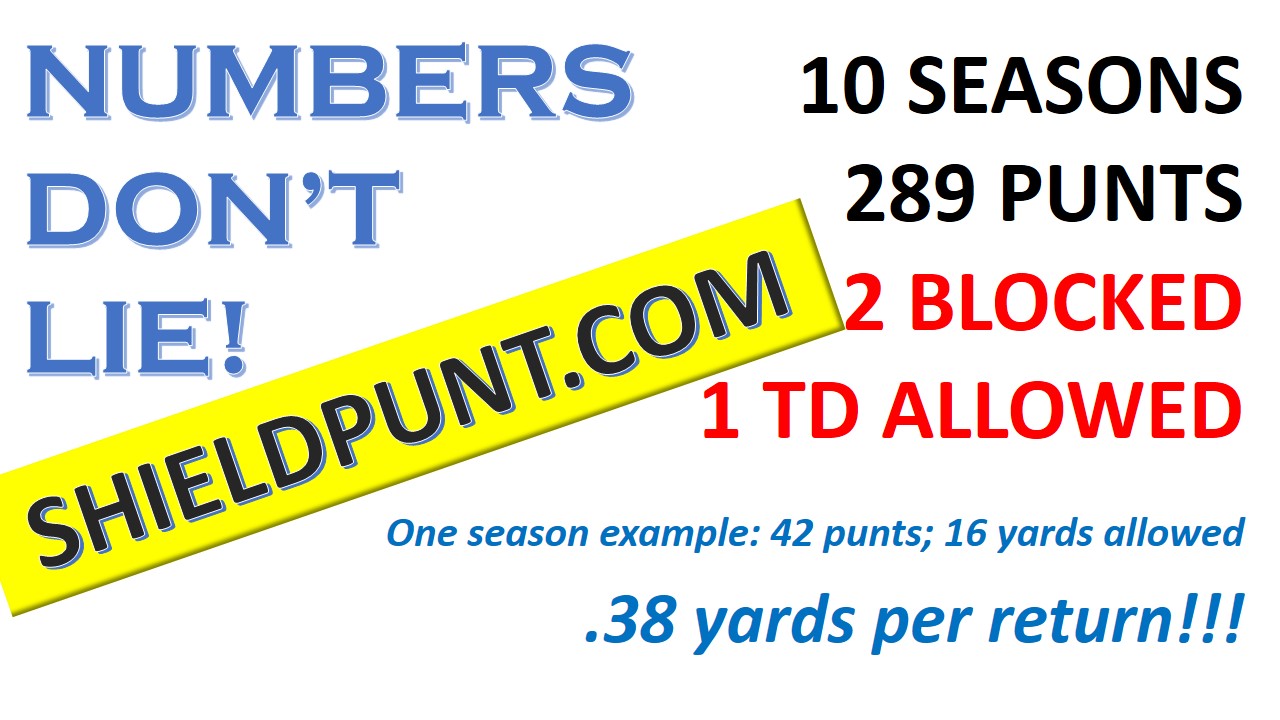 The stats speak for themselves!

If you ask any of the kids who have ever played for me, or coaches on my staffs, what my favorite Special Team is, they will surely tell you “PUNT!”  I really believe that the PUNT team can have more of an effect on a game than any other Special Team.  Do I have any statistical information to prove that?  No, I don’t.  But in the field position game, I don’t see that any of the other Special Teams have as dramatic of an impact as the punt team does.

It is just about an UNBLOCKABLE PUNT!

It can dramatically change FIELD POSITION!

In 2002, the Head Coach I was working for at Linfield Christian put me in charge of the Special Teams.  In prepping for that job, I watched every single special teams play from the 2001 season.  And this was back in the VCR days baby!!  Some of you old folks might know what that was like!  Man, it was TIME CONSUMING!  Sitting there with the remote, fast forwarding to every special team play, etc.  That took me weeks!  Now, with programs like DSV and Hudl, that job gets done much quicker.  Thank the Lord for technology right?!

I wasn’t thrilled with what I saw.  The team was 5-5 in 2001.  We had an average high school punter.  We used the standard 5 linemen, 2 gunners, 2 wings, 1 personal protector and punter formation that you see in the NFL and many other places. 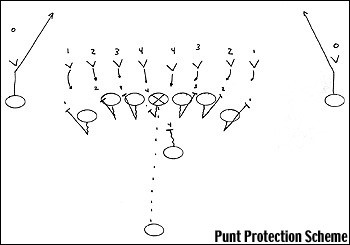 There are 6 things “wrong” with the typical “pro style punt” which I found while breaking down film after the 2001 season after I was assigned the Special Teams job for the 2002 season.

I noticed a few things while reviewing our basic pro style punt team:

1.  Like what I’ve seen with a lot of high school football players and even college and NFL players, making the tackle in the open field on the punt team is a difficult thing to do. What I saw was that our kids were in position to make a tackle many times, but just didn’t.  They would either get juked by the returner, or have poor fundamentals on breaking down and making the tackle.

2.  The 5 linemen were pretty useless in covering punts.  Why are we sending offensive linemen out on the punt team?  Only one lineman of ours all season made a tackle on the punt team.  Well, the main reason we use them is in protection.  But still, is it a wise use of personnel?

3.  We only had two guys getting off the ball and down the field, the gunners.  The other 8 were focused on protection first, then covering the kick second.  If those two gunners got held up, and weren’t able to fight through their blocks, we have to rely on the linemen and the wings to get downfield AFTER their protection responsibilities.

4.  If the other team only put one guy on each gunner, and one returner deep, this meant they were able to bring 8 for the block.  We would have 8 in for protection, but one of those is having to first focus on snapping the ball.  And one, the personal protector, was there to simply pick up anyone the front 7 missed.  Therefore, I felt like we were outmanned.  In fact, we had 3-4 punts blocked because of this during the year.

5.  If we played a team faster than us, we gave up more punt return yards period.  If their returner was faster than our gunners, we lost field position.  There was no way around that.

6.  The geometry and the angles of our coverage unit vs. their return unit made it difficult to keep them from gaining yards and field position.  If a team used a sideline return, they had the advantage of setting that up, knowing where they were going, etc.  We were then on the “defensive” against their return.  I didn’t like that.  Those sideline type returns were very popular ten years ago, and still are today.  They split the field in half, so half of your guys are essentially useless against this type of return as far as making a tackle, etc.  Especially one of your gunners; when they return opposite him, there isn’t much he can do on that play.

So, what do you do to combat these 6 flaws with the standard punt scheme we were using?  How do I “fix” this?

I installed the SHIELD PUNT!  But the shield punt I use, is different than what you are seeing all over the college landscape the last two years.  It’s become a bit of a fad on the college football scene lately.  I started using the SHIELD PUNT in 2002.

I read a lot of articles and research online.  I finally found an idea I really loved, and had never seen on the field before.  The article was called “Dare To Be Different: The Shield Punt.”  It was authored by Coach Mike Gibson who was the Special Teams Coach at Rutgers University at the time. 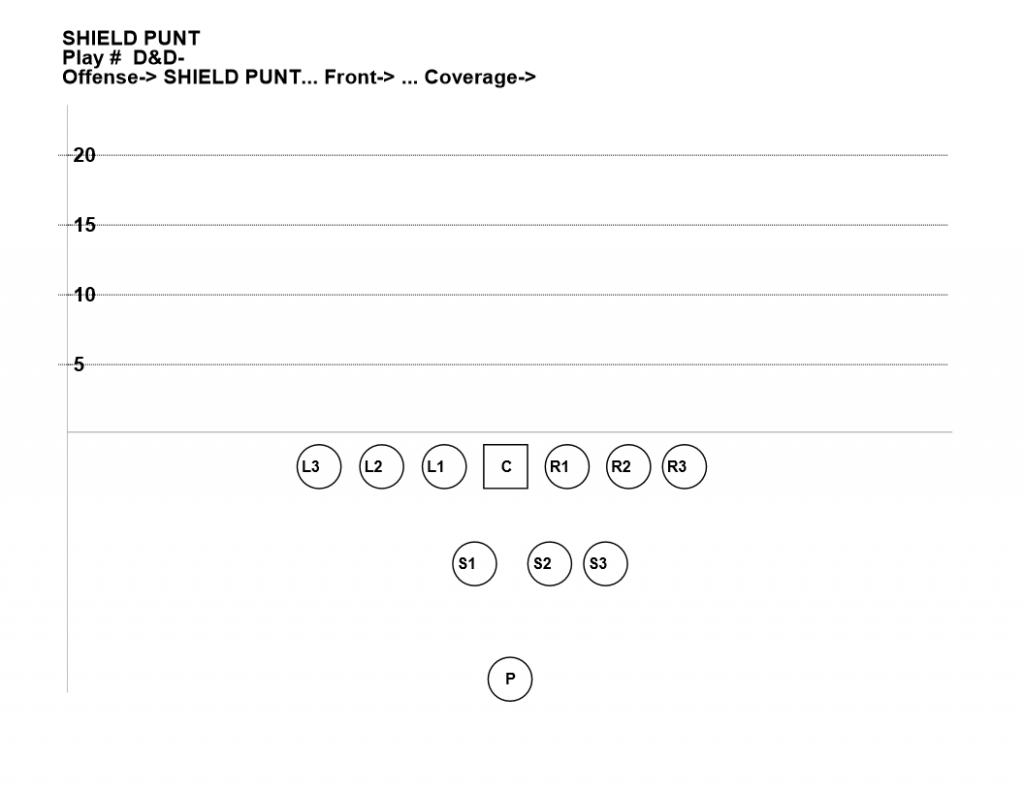 I loved it!  It was totally different than anything I had seen before, which I knew might present some problems for the teams we played.  A phrase I love to apply to Special Teams is “predictability breeds vulnerability.”  This means that if you continue to always do the same thing, you can become vulnerable to attack.  So, something new like this would be great to use!

As with most clinics and articles that I find and want to apply to my own program, I took out of it what I liked, and left what I didn’t like!  So, this website clinic is what I came up with and have taught for the last 10 years regarding the SHIELD PUNT!

How would you like those kind of numbers on your punt team?

I LOVE getting turnovers on punt team! 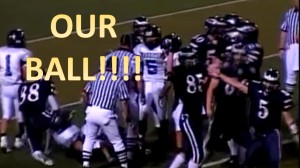 This is from 2007. We got the ball back! Love when this happens on punt!