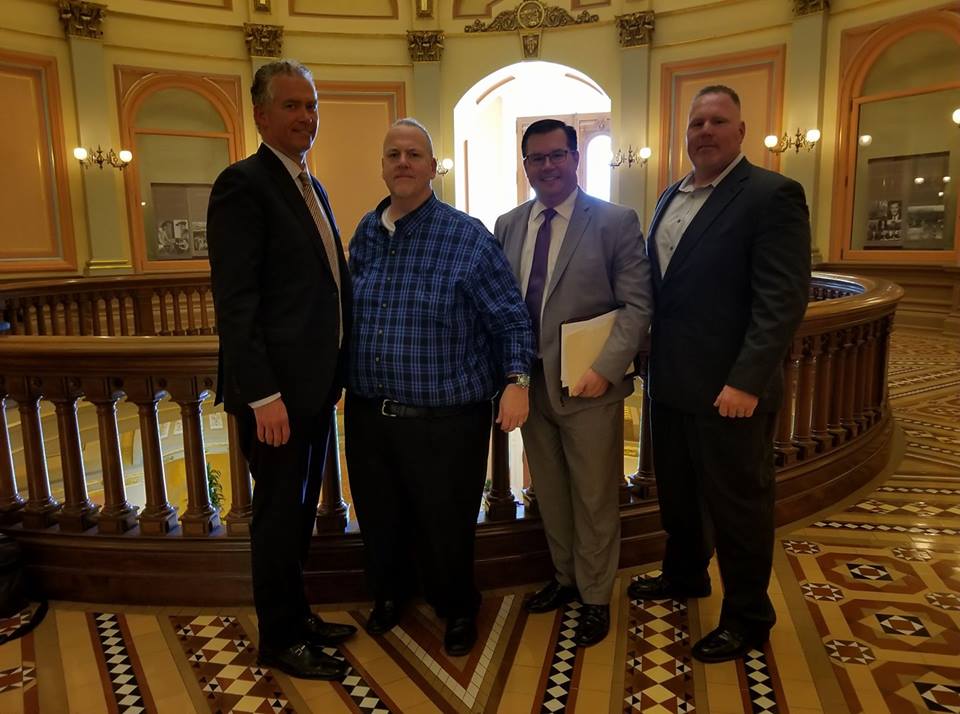 On February 7, 2018, two Assembly members from California introduced a controversial idea: to ban a sport.

“The Superbowl may be over, but the risk of brain injury to kids who play tackle football remains,” said Assembly members Kevin McCarty (D-Sacramento), a co-author of the bill. (His co-author was Lorena Gonzalez-Fletcher (D-San Diego).  “The Golden State’s children need to know that no touchdown or interception is worth long-term damage to their brains caused by tackle football.”

But is this statement true?  The medical community has not come to a consensus on this issue of banning youth tackle football based on concussions and CTE. (You’ll find a plethora of articles and research at the bottom of this post which disagrees with McCarty’s assertion.) Lawmakers used faulty science, failed to ever truly unify their front and never got the needed support to make football illegal. (McCarty specifically was all over the place with his ideas about this law, which you’ll see outlined later in a meeting he had with football proponents.)

McCarty and Gonzalez-Fletcher pulled their bill on April 26, before it ever reached the May 1 Committee Hearing.

Three other states have had this discussion to ban football: Illinois, New York and Maryland.  But California is the ONLY state to kill it before it even reached a Committee Hearing.

How did this happen?

Here’s the story of a grassroots effort by a small group of leaders who rallied their communities up and down the state to Save Youth Football in California.

Fore launched a Twitter account, SaveCaliforniaFootball, the next day. He met with a lobbyist to receive advice about strategy and speaking with lawmakers.  And he started to develop a game plan.

“We want to be careful to unify the many different youth football organizations, and have a clear mission, purpose and voice in this discussion,” Fore said. He’s setting up a press conference to voice concerns about the bill at a football clinic in Costa Mesa next week. February 14 – Steve Famiano creates the Save Youth Football – California Facebook group. (It has grown to more than 8000+ followers as of 4/30/18.) February 16 – Fore sends SCFCA statement out to youth coaches to gather their support with their logo.

February 16 – Fore has conference call meeting with Sacramento lobbyist who reached out to us, wants to remain anonymous, and remains available to help with behind the scenes strategy.  Advises the group to keep things “grassroots.”  (Important note: The group never took a dime from any companies associated with an interest in football in California, no helmet-makers, or youth football organizations, etc.)

February 16 – Fore speaks with Don Wilson, Sacramento Youth Football; he has 15 years experience at the Capitol; Wilson explains each step involved in the bill process, and discusses strategies on how to fight it.

February 16 – Fore speaks with Todd Bloomstine, a lobbyist in Sacramento who is also the President of Bradshaw Christian Jr. Pride Youth Football & Cheer.  Bloomstine would bring invaluable experience as a lobbyist to the table, and help the group focus on timelines and key strategies regarding meeting with lawmakers, etc.

February 16 – Fore reaches out to and speaks with Jason Ingman, author of the petition, about strategizing, invites him to a conference call the following Monday.  Ingman accepts.  He would later go on to become one of the key members of the coalition.

February 21 – Fore and Rafter talk further about communications strategy.  They discuss several website url names, and agree to use SaveYouthFootball.com.

February 23 – SaveYouthFootball.com launched by Joe Rafter.  He got it done in time to promote at a press conference the next day.

February 24 – Fore and Ron White meeting at the Glazier Clinic to discuss strategy for opposing this bill.

February 28 – Todd Bloomstine leads conference call with specific agenda items towards strategy in Sacramento.  There is a pitch to hire an outside lobbyist, but the team decides to stay grassroots on this effort.  There is also discussion to reach out to helmet makers, uniform makers and other equipment vendors with an interest in football to help sponsor the fight against this law.  The group decides that they want no conflict of interest from any groups who will benefit financially from youth football.

Direct Lobbying Conference Call Items
A. Bloomstine update on conversation with chief consultant to Assembly Arts, Entertainment, Sports and Internet Media Committee
B. Discussion on two pronged or single prong direct lobbying effort (lobbying without a bill number? Or wait until a bill number? Or both?)
C. Three tiered distribution information — Leagues to programs to participants, or is there a better way?
1. Compilation of California leagues?  Is there one?
D. Develop packet to instruct participants on how and what to lobby
E. Open items.

March 1 – Assemblyman McCarty presented a draft amendment to Legislative Counsel with the language “only allow tackle football after jr high graduation for organized athletics which is schools and recreation leagues.”

March 9 – Mike Wagner emails the group announcing that Joe Rafter will represent Pop Warner for all of California. This email is based on a telephone call Mike made to Joe to  days before to propose and agree on this organizational direction.

March 12 – Joe Rafter leads his conference call with a strong agenda and roles for each of the five coalition members.

Joe Rafter presents McCarty with 5 additional medical reports. McCarty refused to compromise on his position or work in cooperation with the Save Youth Football coalition and said “It’s not my job to argue for the opposition.”

Todd Bloomstine asks McCarty to share his logic regarding the age limits of 14 and 12 as opposed to 18. McCarty asks us if we prefer he write the bill to state 18 years and under as the limit. We reply with “Yes, we do because it more accurately reflects the research you are referring to.”

McCarty explains that he selected 14 because he wasn’t prepare to include high school football at this time. We then ask for insight into the 12 year old age limit. McCarty explains, “My sister lives in Southern California, and I asked her what she thought of the bill and age limit. She thought 12 years old was a better limit to allow for kids to play a year or 2 before they start high school. This way kids don’t start tackle football in high school.” McCarty further explains “I am a crazy left wing liberal and this is what I do.”

March 15 – Jason Ingman engaged Assemblyman McCarty in a public open house forum.  McCarty stated he changed the age limit for Assembly Bill 2108 from 14 years to 12 years based on research, later determined to be the Boston University study from September 2017, as well as recommendations from his sister and brother-in-law.

March 16 – Cathy Luna, San Diego Youth Football Commissioner, along with Lawrence Lee, Stephen Cooper and Coach Braswell  met to confer with Assemblywoman Lorena Gonzalez-Fletcher.  They presented Gonzalez-Fletcher with research which contradicted the research used to develop AB2108.  They also presented the fact that flag football only would discriminate against those who are not skilled players such as linemen and bigger sized kids, and also identified that cheer would theoretically have the same risk of sub concussive hits with flyers and bases.  Gonzalez-Fletcher stated it was not the Traumatic Brain Injury issue but CTE that they were concerned with.  Then it went from CTE to sub concussive hits, then it went from sub concussive hits to the helmet causing injury by having the head impact with the helmet not contact.  She stated her office would send us the items she referenced, which happened to be a NY Times article, not the actual publication.  The group also left a report with the Dr. Cynthia LaBella, a sports medicine director, submitted written testimony arguing there is no evidence that eliminating tackle football would prevent CTE.

March 18 – Joe Rafter outlines, organizes and writes Version 1.0 of the Save Youth Football playbook; it is published via email and the website.

April 8 –Joe Rafter outlines, organizes and writes Version 2.0 of the Save Youth Football playbook; it is published via email and the website.

April 13 – Coalition members Steve Famiano and Ron White, along with members of the SoCal Elite Conference met with Assemblywoman Gonzalez-Fletcher in her San Diego office to discuss the bill.  Gonzalez-Fletcher states that they are starting with youth football when she was asked “why just football?”  The meeting was wrapped up by the group asking her to work with them, to which the lawmaker remained silent, and gave no response.  This was the second official time the coalition asked lawmakers to work with our group to help make football more safe for kids, etc.

April 18 – Coalition members Steve Famiano and Ron White speak to youth football administrators regarding AB 2108 at the LA Chargers/USA Football; they were invited to speak by USA Football.

April 16 – Phase 2 of the playbook is launched. Nearly 600 visitors to the website see the playbook.

April 20 – Assemblyman Jim Cooper releases HR 103, a House Resolution naming Aug 2018 as the Safe Youth Football month in California; the resolution was written with the assistance of the Save Youth Football coalition.

April 21 – San Diego Youth Football Commissioner Cathy Luna and two presidents meet with Assemblywoman Lorena Gonzalez-Fletcher at her San Diego office.  KUSI news media covered the meeting.  Gonzalez-Fletcher stated that she would work on safety measures in high school, and made it a point to state that she had not received any information to date to change her stance on the bill.

April 22 – The Save Youth Football coalition held dual rallies in Sacramento and Santa Clara drawing hundreds of supporters at each rally in opposition to AB 2108. April 23 – Phase 3 of the playbook is launched. Members of Pop Warner and USA Football meet with Assembly members in Sacramento.

April 24 – Joe Rafter, Ron White, Todd Bloomstine, and Jason Ingman, (seen below as listed) met with Assemblymen Acosta and Committee Chair Chu, as well as staffers from two other committee members offices and the Assembly Republican Caucus to discuss our opposition to AB 2108.  Amendments to AB 2108 were discussed to make the game of football more safe for youth. April 26 – Assemblyman McCarty refused to accept the amendments to AB 2108 and pulls the bill from the Committee on Arts, Entertainment, Sports et al. as he does not have the votes to pass the ban on youth football.

And that is the story of a grassroots effort by a small group of leaders who rallied their communities up and down the state to Save Youth Football in California.

(WHAT DID WE MISS?  DID WE MISS KEY MEETINGS OR EVENTS IN YOUR AREA?  IF SO, PLEASE EMAIL CHRIS@EIGHTLACES.ORG WITH YOUR INSIGHT.)

STATEMENTS IN SUPPORT OF YOUTH TACKLE FOOTBALL IN CALIFORNIA

Does CTE call for an end to youth tackle football? (Star Tribune)

Be Skeptical: Will 99% of NFL Players Really Develop CTE? (American Council on Science and Health)

3 reasons why your child should play youth football (USA Football)

His Death Came After A Motorcycle Accident, but was CTE really to blame? (LA Times)

Is football really alone among our sports spectacles in killing our children? (CoachFore.org)