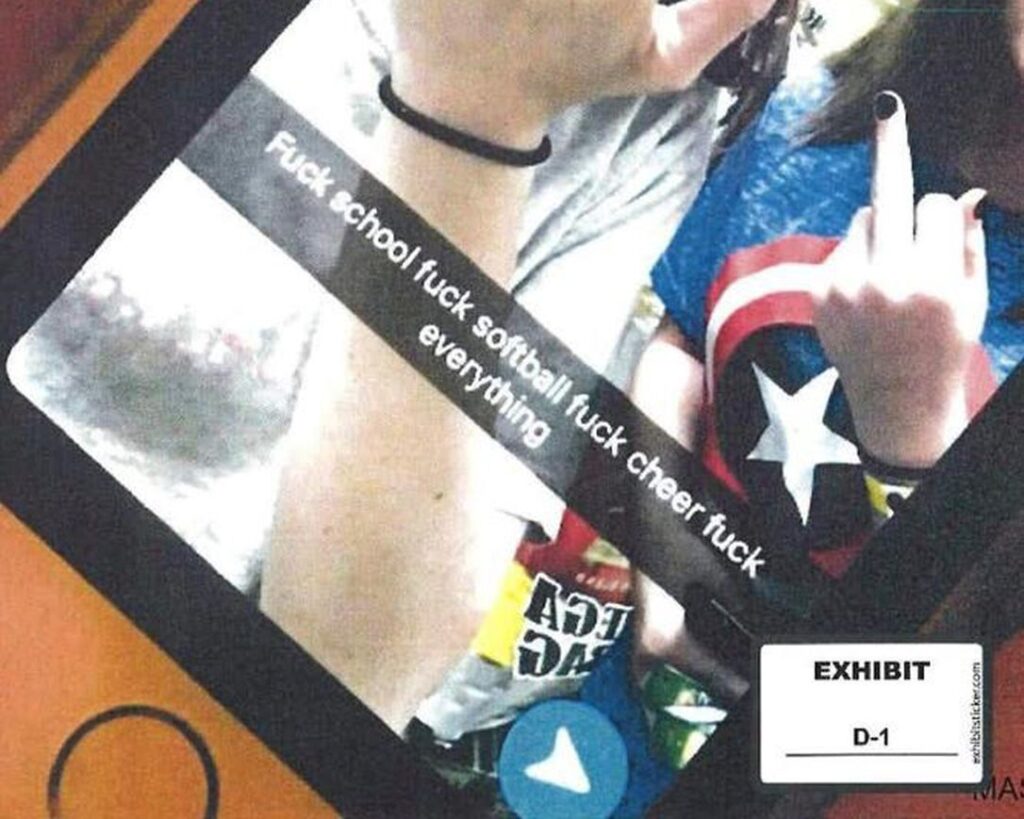 After cheer tryouts ended without a spot for her on the Varsity cheer team (she did make the JV squad) in the Spring of 2017, freshman Brandi Levy, a student at Mahanoy High School (Mahanoy City, PA) was at a store on the weekend with a friend of hers.  Like many teenagers do these days, they turned to Snapchat to express an opinion.

“F— school, f— softball, f— cheer, f— everything” she typed onto her personal device.  She then took a picture with her friend, both of them extending their middle fingers, “You know, the bird (classic line from Top Gun).”

In no time at all, the picture made its way around the small town of not even 5,000 people.  Eventually, the two coaches saw the picture.  One of the two coaches was also an algebra teacher.  The picture caused a stir on campus, so much so that discussion in algebra class turned towards the “snaps” on several days.

After collaborating with the Principal, the coaches made a decision to suspend the young lady from the JV cheer team for one year.  Their argument for suspension was that the posts used profanity in connection with extracurricular activity, and in so doing, the speech violated school and team rules.

Brandi apologized.  It was too little, too late.  This decision was appealed to the Athletic Director, the Principal, the Superintendent, and even the school board. They all upheld the coach’s decision to suspend her from the cheer program for a year.  So, the parents filed a lawsuit.

Eventually, this case ended up in the District Court where her parents argued that punishing her violated her First Amendment rights because they posts did not cause “substantial disruption” at school.  The District Court agreed, and granted a Temporary Restraining Order and Preliminary Injunction, siding with the student.  The court declared that the social media posts did NOT cause substantial disruption at the school.  They cited a landmark Supreme Court case: Tinker vs. Des Moines Independent Community School District (1969).

In Tinker, the Supreme Court indicated that schools have a “special interest in regulating on campus student speech that materially disrupts classwork or involves substantial disorder or invasion of the rights of others.”

Because the speech was off campus, the panel concluded the Tinker precedent and standard did not apply, and that the school did not have a right to discipline her.

And in my opinion, this right here is the most important takeaway for school leaders.

1.  The posts criticized rules of a community that the student forms a part of.  Her message did not “cross the line” of her 1st Amendment rights.

2.  The circumstances of her speech diminished the interests of the school, meaning that her rights outweighed the school’s rights.

3.  The school’s interest in teaching good manners by punishing the vulgar language is “weakened considerably” by the fact that the student spoke outside of school hours, on her own time.

4.  The school’s interest in preventing disruption was not supported by the actions, or what they referred to as “the record.”  There were just 5-10 minutes of an algebra class disrupted for a couple of days as students talked about the matter with the teacher, who was also a Cheer coach.  Just “some” of the cheer team members were upset with the posts.

5.  The school did little to suggest that there was a substantial interference in, or disruption of, the school’s efforts to maintain cohesion on the cheer squad. There was very little evidence presented that suggested any detriment to team moraleThese 5 reasons, the Supreme Court said, do not meet the demanding standards of the Tinker case.

To sum up when schools CAN act on the speech of a student, I refer to what Justice Alito had to say in his concurring statement.  This concept is VERY important for educators to understand.  This landmark case that we’ve discussed does NOT strip all authority from educators to hold students accountable for their speech.

“I have already explained what this delegated authority means with respect to student speech during standard classroom instruction. And it is reasonable to infer that this authority extends to periods when students are in school but are not in class, for example, when they are walking in a hall, eating lunch, congregating outside before the school day starts, or waiting for a bus after school. During the entire school day, a school must have the authority to protect everyone on its premises, and therefore schools must be able to prohibit threatening and harassing speech. An effective instructional atmosphere could not be maintained in a school, and good teachers would be hard to recruit and retain, if students were free to abuse or disrespect them. And the school has a duty to protect students while in school because their parents are unable to do that during those hours. But even when students are on school premises during regular school hours, they are not stripped of their free-speech rights. Tinker teaches that expression that does not interfere with a class (such as by straying from the topic, interrupting the teacher or other students, etc.) cannot be suppressed unless it “involves substantial disorder or invasion of the rights of others.”

At the end of the day, times are a changin!  I think that this whole thing can be summed up very well for educators here in what the Court wrote with their opinions. You can read the entire decision and opinions of the Supreme Court here. 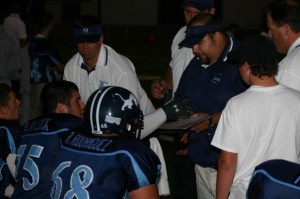